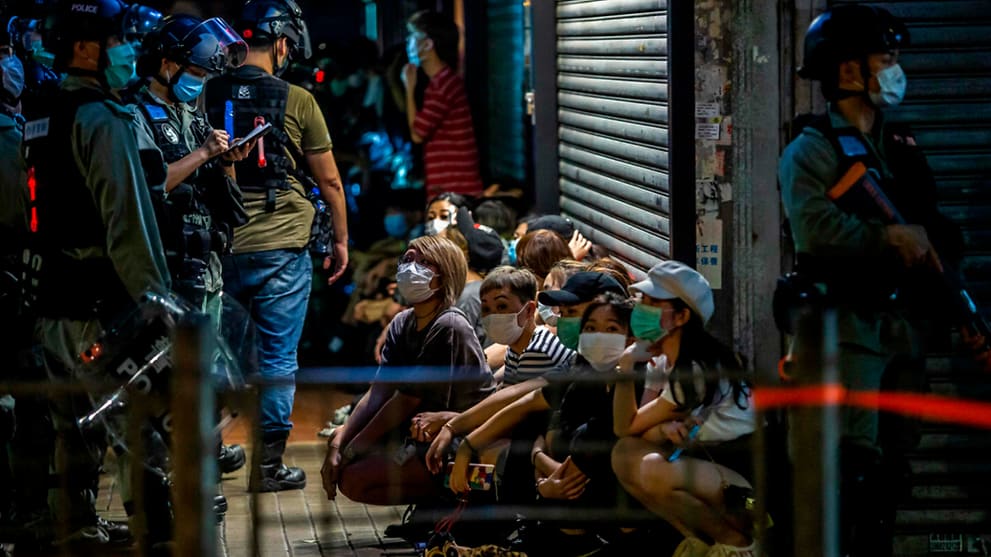 HONG KONG: Hong Kong authorities said on Monday (May 11) they arrested 230 people during protests on the weekend after a sing-along demonstration at a shopping mall spilled out on to the streets of the city.

Hundreds of riot police were deployed to disperse the protesters on Sunday, with some members of the media caught up in the chaos that evoked memories of the sometimes violent unrest that rocked the global financial hub last year.

Police said the arrested were aged between 12 and 65 and their offences included unlawful assembly, assaulting a police officer and failing to produce proof of identity.

A 22-year-old man was found to have materials believed to be intended for making petrol bombs, police said.

The Hospital Authority said 18 people were taken to hospital.

Footage showed protesters being subdued on the ground, scuffles and people bleeding.

Police fired pepper spray at journalists and activists, and conducted stop and search operations on members of the public and media.

The Hong Kong Journalists’ Association (HKJA) said some members of the press were prevented from filming.

“Some journalists who were sprayed by pepper spray were not allowed to receive immediate treatment, and they were requested to stop filming,” said Chris Yeung, chairman of the HKJA.

Police did not immediately respond to a request for comment.

The outbreak of COVID-19 and strict rules to curb its spread had brought a relative lull in protests this year, but the recent arrest of activists and renewed concern about Beijing’s tightening grip on the city have revived the movement.

Police in riot gear told protesters they were staging an illegal assembly and violating anti-virus measures that bar gatherings of more than eight people.

Video footage showed Kwong apparently being pushed to the ground and then surrounded by officers. He was later taken to hospital after he said he was feeling unwell.

The financial hub is gearing up for protests over the next few months, with activists calling for two million people to gather for an annual march on Jul 1 that marks the anniversary of its handover from British to Chinese rule in 1997.