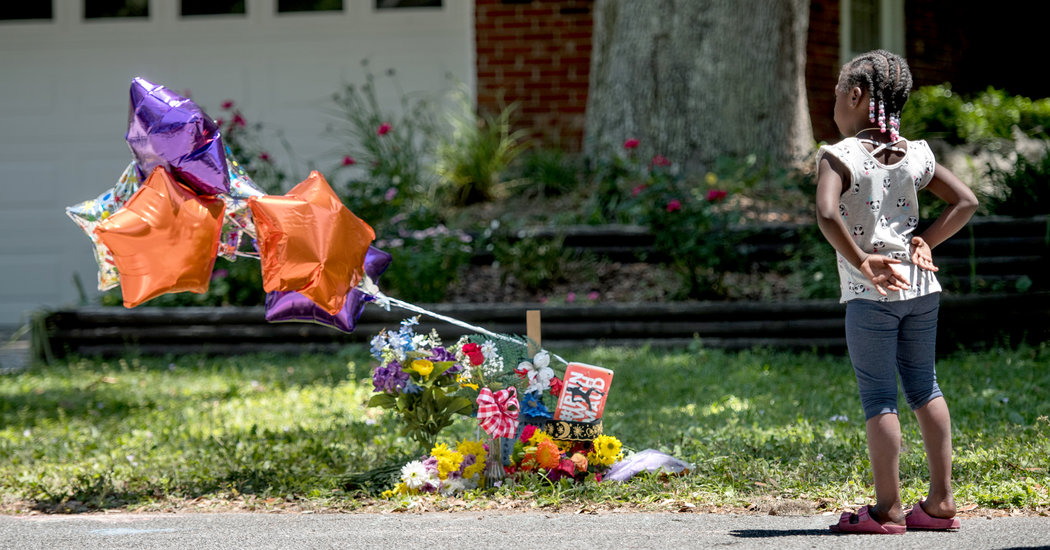 Good morning. The virus is inside the White House. Airlines are in trouble. And Trump aides are worried about older voters. Let’s start with the Ahmaud Arbery case.

How a case went national

For almost two months, the killing of Ahmaud Arbery received very little attention. Over the past two weeks, it has become a subject of national outrage.

This morning, I want to tell you the story of what changed.

In early April, more than a month after Arbery’s death, an actor and writer named JL Josiah Watts sent an anguished email to Kim Severson, a food writer for The Times who had met him while reporting a story several years ago. Watts explained that a cousin of his — Arbery — had been chased, shot and killed by two men, and nobody had been arrested. The men are white, and Arbery was black.

Severson forwarded the email to Richard Fausset, The Times’s Atlanta bureau chief, and he began looking into it. He discovered that the police report was based almost entirely on the account of one of the two white men — who turned out to be a former local police officer. “It all seemed very much worth digging into,” said Richard, who grew up in New Orleans and has spent more than a decade covering the South.

He asked his editors to let him go to the Georgia coast, even though most Times correspondents aren’t traveling during the pandemic. The editors said yes, so long as he wouldn’t have to spend the night in a hotel.

Richard then drove the 10-hour round trip in a single day in mid-April to interview people in Brunswick, Ga., the scene of the shooting. In the days that followed, he continued reporting from Atlanta and obtained more police records. By that point, he said, he began to feel as if he were “sitting on top of a bomb.”

The two men — Gregory and Travis McMichael, a father and son — were charged with murder last week. They have yet to respond publicly, and — like all defendants — they will get a chance to do so.

1. An outbreak in the White House

The coronavirus has reached the cramped offices of the White House, with two staff members having tested positive. Three top health officials began to quarantine themselves over the weekend, including Dr. Anthony Fauci, who said he had contact with an infected staff member.

Given the vast resources at the White House’s disposal, including access to rapid-testing kits, the news suggests that other workplaces may struggle to prevent transmission if the economy begins to reopen soon.

2. The airlines, in crisis

The average number of passengers on a commercial flight within the U.S. right now: just 23. Every day, the airline industry is losing almost $400 million.

By now, a friend may already have forwarded you a much-discussed blog post from a biologist named Erin Bromage — it has more than six million views. It’s an impressively clear explanation of how the virus often spreads inside confined spaces, like restaurants, churches, workplaces and schools.

Even when people remain more than six feet apart, they can become infected by breathing the same air as an infected person for an extended period of time, Bromage explains. Those scenarios, he argues, are more worrisome than a quick trip to the grocery store or almost any outdoor activity.

Background: Bromage told me that he began focusing on the virus in January to have a current example to use in his class on infectious diseases at the University of Massachusetts, Dartmouth.

4. A political problem for Trump: 65 and over

Kellyanne Conway and other top aides to President Trump are growing anxious about his slipping support among voters over age 65, Annie Karni and Maggie Haberman report. He won that age group in 2016, but his handling of the virus — a virus that disproportionately harms the old — may be turning off some voters.

And on the Democratic side, Joe Biden is more popular among older voters than Hillary Clinton was. Consider this comparison of a poll from last month and one from shortly before the 2016 election:

Many residents of Bangkok are so obsessed with their dogs that they rushed out to pet salons as soon as the city’s lockdown began to ease. “All over town, you will see Labradors and Weimaraners, Pomeranians and pugs,” our Southeast Asia bureau chief Hannah Beech writes. “There are too many Yorkshire terriers. Some wear nail polish, and many wear clothes.”

Jamie Stockwell is the deputy national editor who gave Richard Fausset approval to travel to Brunswick, Ga. (as discussed above), and so we asked her about The Times’s overall policy on correspondents’ travel now.

For the most part, she said, reporters are not traveling. They’re reporting by phone, video chat, email and other means from their homes. “We’re trying to keep our people as risk-free as possible,” Jamie said.

Obviously, though, reporting often involves some risk, and The Times has decided some stories still require travel — ideally day trips. One exception: John Eligon traveled to Detroit to ride a city bus there along with workers who have had to continue taking it do their jobs. He then self-isolated in a hotel before returning home to Kansas City.

“At some point, we’re going to grow more comfortable with travel,” Jamie said. “But I don’t think we’re there.”

Nutritional yeast is not just for hippies

Long praised by vegans for its savory flavor, nutritional yeast is going mainstream. The mustard-yellow flakes, nicknamed “nooch,” also work as an umami-rich seasoning. Use it when salt or cheese doesn’t feel quite right — with sesame noodles, in salads, on roasted vegetables, you name it. Toss it with some popcorn for a Parmesan-like kick.

“People miss restaurants or bookshops or beaches or movie theaters, but what they’re really missing is the chance to gather,” our pop music critic Jon Caramanica writes.

P.S. For the first time in our 169 years of publishing, the word “shecession” — a reference to the fact that a majority of the jobs lost in April were held by women — appeared in The Times, as noted by the Twitter bot @NYT_first_said.

Today’s episode of “The Daily” is about the shooting death of Ahmaud Arbery.

Lauren Leatherby, Adam Pasick, Ian Prasad Philbrick and Sanam Yar contributed to The Morning. You can reach the team at themorning@nytimes.com.