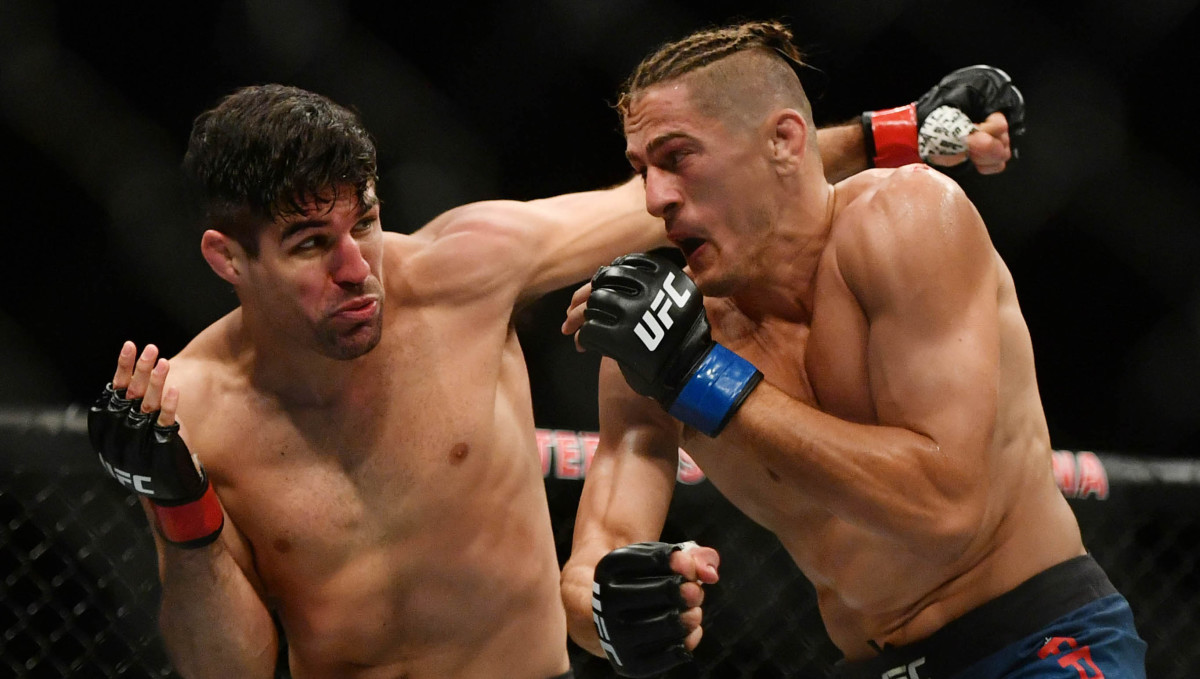 On a night filled with question marks, there is one certainty: the UFC is back.

Amidst serious COVID-19 concerns, UFC 249 is taking place live at the empty VyStar Veterans Memorial Arena in Jacksonville, Florida. The fight pitting Ronaldo “Jacaré” Souza against Uriah Hall fight was called off on Friday when Souza tested positive for COVID-19, igniting more questions as to whether the card should be taking place.

The viewing experience of an empty-arena stadium is not that odd, as the camera is focused on the Octagon, but it is certainly odd not to hear a crowd react to big blows. There are some positives, which include the ability to listen to the corner calls and hear the strikes. Plus, there is a chance for a little creativity, like Sam Alvey did in the early prelims, high-fiving a non-existent crowd before his fight against Ryan Spann. For a sports audience that is desperately craving live sports, UFC 249 comes at a perfect time.

The main card should be filled with excitement. The headline act is Tony Ferguson fighting Justin Gaethje for the interim Lightweight Championship. This is a no-win battle for Ferguson (25-3). He is supposed to win and then resume his chase of Khabib Nurmagomedov, but that will be easier said than done. Gaethje (21-2) is a problematic matchup in terms of striking and wrestling, making this a very dangerous fight. If Gaethje wins, it is highly likely that Conor McGregor then jumps to the front of the line and receives the title shot against Nurmagomedov, even though Gaethje will be in the interim champ. Ferguson needs to win to keep his shot at Nurmagomedov alive.

Another nightmarish matchup takes place in the Bantamweight Championship title fight. Henry Cejudo defends his belt against Dominick Cruz, and this is a trap match for the champ. Cruz (22-2) has an advantage in size and better footwork than Cejudo (15-2), which will cause serious problems. Cruz also comes into this fight hungry. He hasn’t fought since he was destroyed by Cody Garbrandt in December of 2016, while Cejudo is in the midst of a run that has made him look untouchable. This fight has upset written all over it.

A featherweight fight pitting Calvin Kattar against Jeremy Stephens has been moved to catchweight after Stephens failed to make weight. Even though Stephens (28-17, 1 NC) comes in overweight, a win would still mean a lot for Kattar (20-4), as Stephens is an incredibly powerful striker and ranked above him in the featherweight rankings.

Francis Ngannou can also punch his ticket for a future shot at the Heavyweight Championship. Ngannou (14-3) needs to defeat the undefeated Jairzinho Rozenstruik (10-0), and that win would put him in position to challenge the winner of Stipe Miocic-Daniel Cormier, assuming that fight takes place this summer.

The card also includes a battle of heavyweights in former NFL player Greg Hardy against Yorgan de Castro. Hardy (5-2, 1 NC) needs the victory to prolong his UFC career. Given the dislike toward Hardy for his history of domestic abuse, an upset win by de Castro (6-0) would immediately be the biggest victory of his career.

All questions are about to be answered, as UFC returns with what should undoubtedly be a memorable 249 card.