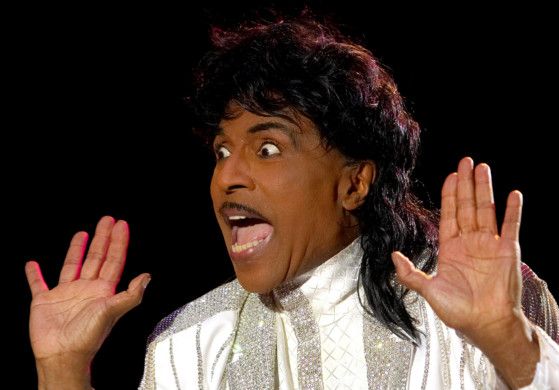 Celebrities mourned the death of rock ‘n’ roll pioneer Little Richard, who died May 9 at 87.

“I’m so saddened to hear about the passing of Little Richard, he was the biggest inspiration of my early teens and his music still has the same raw electric energy when you play it now as it did when it first shot through the music scene in the mid 50s,” Mick Jagger wrote on social media. “When we were on tour with him I would watch his moves every night and learn from him how to entertain and involve the audience and he was always so generous with advice to me. He contributed so much to popular music. I will miss you Richard, God bless.”

Quincy Jones wrote on social media: “Absolutely heartbroken this morning at hearing the news of the passing of my brother & friend, the great Little Richard. From our connection through our mutual mentor, Bumps Blackwell, to recording ‘Money Is’ & ‘Do It To It’ for the $ soundtrack, to doin’ the hang-thang at countless awards shows & industry events, every moment spent in Richard’s company was a thrill. An innovator who’s influence spans America’s musical diaspora from Gospel, the Blues & R&B, to Rock & Roll, & Hip-Hop, there will never, ever, ever, be another Little Richard…God Bless you Richard. May your soul Rest In Peace.”

“I just heard the news about Little Richard and I’m so grieved. He was my shining star and guiding light back when I was only a little boy. His was the original spirit that moved me to do everything I would do,” Bob Dylan tweeted. “In his presence he was always the same Little Richard that I first heard and was awed by growing up and I always was the same little boy. Of course he’ll live forever. But it’s like a part of your life is gone.”

“With his exuberance, his creativity, and his refusal to be anything other than himself, Little Richard laid the foundation for generations of artists to follow. We are so lucky to have had him. Sending all my love to his family and friends today,” Michelle Obama tweeted.

“It is with a heavy heart that I ask for prayers for the family of my lifelong friend and fellow Rocker ‘Little Richard.’ He will live on always in my heart with his amazing talent and his friendship! He was one of a kind and I will miss him dearly. God Bless his family and fans. Rest In Peace, my friend. Love Eternally,” Jerry Lee Lewis said in a statement.

“Without a doubt — musically, vocally and visually — he was my biggest influence. Seeing him live in my teens was the most exciting event in my life at that point. Goosebumps, electricity and joy came from every pore. His records still sound fresh and the opening few seconds of ‘Tutti Frutti’ are the most explosive in music history,” Elton John wrote on social media. “I was lucky enough to work with him for my ‘Duets’ album in 1993. He was shy and funny and I was SO nervous. The track we recorded ‘The Power’ is a favourite in my catalogue. We also played live at the Beverly Hilton and I felt like I’d died and gone to heaven. He influenced so many and is irreplaceable. A true legend, icon and a force of nature. #RIP Little Richard.”

“God bless little Richard one of my all-time musical heroes. Peace and love to all his family,” Ringo Starr tweeted.

“So sad to hear that my old friend Little Richard has passed. There will never be another!!! He was the true spirit of Rock’n Roll!,” Keith Richards tweeted.

“Rest In Peace To One Of The True Creators Of Rock And Roll. This Is The Commercial I Directed With Little Richard And Michael Jordan, 1991,” Oscar winner Spike Lee tweeted.

“RIP Little Richard, a very sad loss. My thoughts are with his loved ones,” Jimmy Page tweeted. “It’s Little Richard’s songs that pioneered rock’n’roll. I got to hear him and his band at the Newport Lounge in Miami and boy were they good.”

“#LittleRichard was a genius, pure and simple. He paved the way for (code for he was ripped off by) so many artists. Watch his YouTube performances to see what I mean. I met him on ‘Down and Out in Beverly Hills’, in which he was hilarious. What a legacy. God bless you, Richard,” Bette Midler tweeted.

“Little Richard was one of the original rock ‘n’ rollers – He was THE ORIGINAL GLAM ROCKER, and he took a lot of abuse for being in the first wave. He forged a path for all of us who followed,” Joan Jett tweeted.

“The loss of a true giant. My sincerest condolences go out to his family and friends,” Nile Rodgers tweeted.

“I served soul food brunch to Little Richard every Sunday for a year while waitressing at Aunt Kizzy’s Back Porch in LA. I was a college student. He tipped me a crisp $100 bill each week on a $75 breakfast with friends. This was 30 years ago. Helped me so much. God rest his soul,” filmmaker Ava DuVernay tweeted.