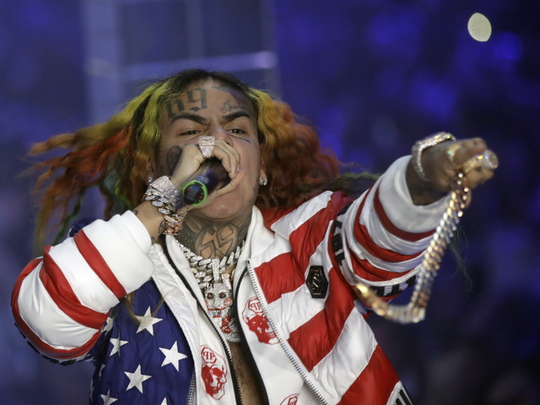 -Give 6ix9ine this: Only a few weeks out of prison, he’s already finding ways to tap back into the zeitgeist.

“Been hot way before coronavirus,” the controversial New York rapper barks in ‘Gooba’, his first single since being released from custody last month after serving a portion of a sentence stemming from federal racketeering and firearms charges. 6ix9ine, also known as Tekashi 6ix9ine, was granted an early release due to the spread of COVID-19, which means you can understand even more why he’d use his self-styled comeback song to name-check the virus on everyone’s mind. (He’s serving the remainder of his term in home confinement, just like hundreds of millions of quarantined people around the world.)

‘Gooba’, which appeared Friday on streaming services, sticks closely to the rowdy, hyperactive sound that made 6ix9ine, 24, one of hip-hop’s biggest new stars in 2017; once again he’s taunting his enemies in a voice that suggests somebody yelling at you as he hangs out a car window.

At just over two minutes long, the song is sure to satisfy fans of the bruising SoundCloud rap sound that’s faded in popularity over the last couple of years as artists like Lil Uzi Vert and Lil Baby have moved in spacier, more melodic directions.

“HOLD UP WAIT A MINUTE YA THOUGHT I WAS FINISHED,” he wrote on Instagram as he announced ‘Gooba’s’ release.

But the question for 6ix9ine (born Daniel Hernandez) as he attempts to reclaim his spot is whether his messy legal issues — including his arrest for the use of a child in a sexual performance and his later participation with prosecutors in detailing his involvement with a gang will make him radioactive to even those who like his music.