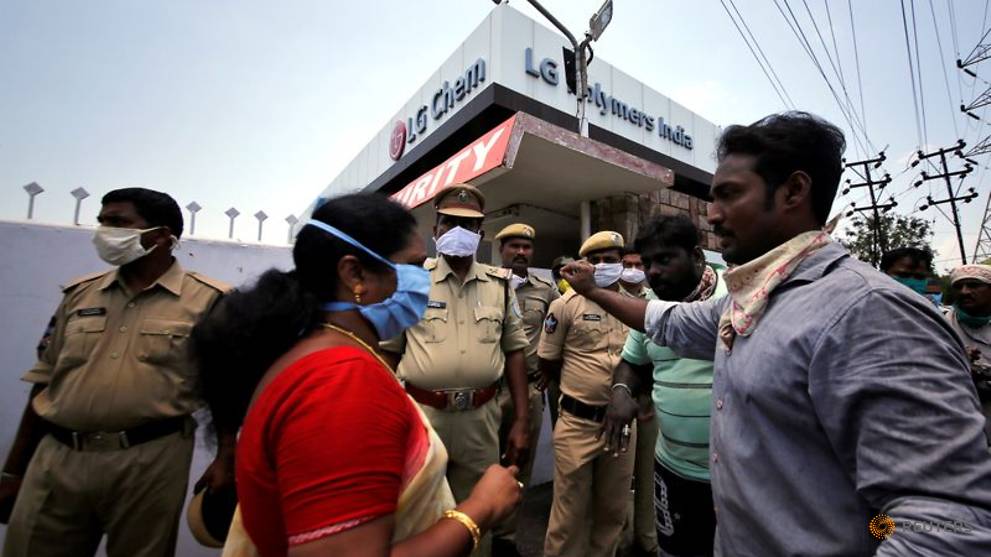 VISAKHAPATNAM: Villagers placed the bodies of three victims of a deadly gas leak from an LG Polymers plant in southern India at the gates of the site on Saturday (May 9), and demanded the factory be shut down immediately and its top management arrested.

Toxic styrene gas spewed out of the plant near the southern city of Visakhapatnam on Thursday, killing at least 11 people and forcing 800 more to be hospitalised for treatment. Hundreds of victims remain in hospital.

On Saturday, villagers staged a sit-in at the plant’s gate with three bodies of victims as the Director General of Police visited the plant, Reuters’ partner ANI reported.

Some protesters barged into the compound and police had to block their way to allow officials investigating the leak to come in and out.

Protestors shouted “We want justice!” and demanded a permanent closure of the factory that is close to residential areas, ANI reported.

They also called for the arrest of factory management of LG Polymers, which is a subsidiary of LG Chem, South Korea’s biggest petrochemical company.

Police have filed a negligence and culpable homicide complaint against the management of the LG Polymers plant.

In a statement on Saturday, LG Polymers apologised to all those affected by the incident and said it would extend all possible support to ensure those affected and their families were taken care of.

“The company is committed to work closely with the concerned authorities in India to investigate the cause of this incident,” the company said.

It said its initial investigations suggested the tragedy was caused by leaking vapour from a styrene monomer storage tank.