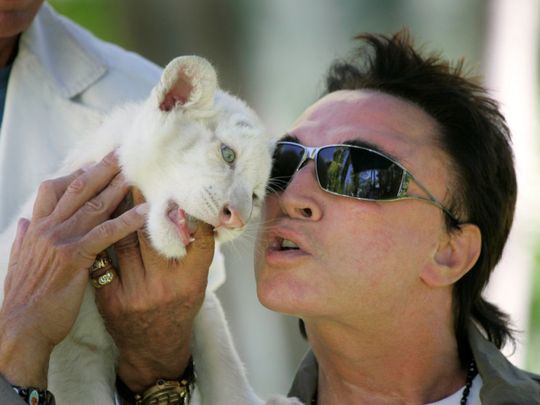 Roy Horn, who levitated tigers, made elephants disappear, turned himself into a python and mesmerised Las Vegas audiences for decades as half of the famed illusionist team Siegfried & Roy, died on Friday in Las Vegas, where he lived. He was 75.

The cause was complications from COVID-19, the disease caused by the coronavirus, according to his publicist, Dave Kirvin.

The German-born performers’ long-running production, one of the most successful in Las Vegas history, ended on Oct. 3, 2003, when Horn, on his 59th birthday, was mauled by a 400-pound white tiger who lunged at his throat and dragged him offstage before a stunned, sold-out crowd of 1,500 at MGM’s Mirage hotel-casino.

An aide yanked the tiger’s tail, leapt on its back and tried to pry open its jaws. Another sprayed it with a fire extinguisher until it let go. But Horn’s windpipe had been crushed and an artery carrying oxygen to his brain was damaged. He suffered a stroke and partial paralysis on his left side, underwent two operations at University Medical Centre in Las Vegas and was placed on life-support systems.

After weeks in critical condition, however, Horn began a long recovery, with rehabilitation at the UCLA Medical Centre in Los Angeles. In 2004, he returned to his home in Las Vegas, and within months he was walking again with assistance. There was even talk of a comeback, but medical experts and entertainment moguls considered it highly unlikely.

In February 2009, Siegfried and Roy made one final appearance with a tiger, a benefit performance for the Lou Ruvo Centre for Brain Health in Las Vegas, and officially retired from show business in 2010.