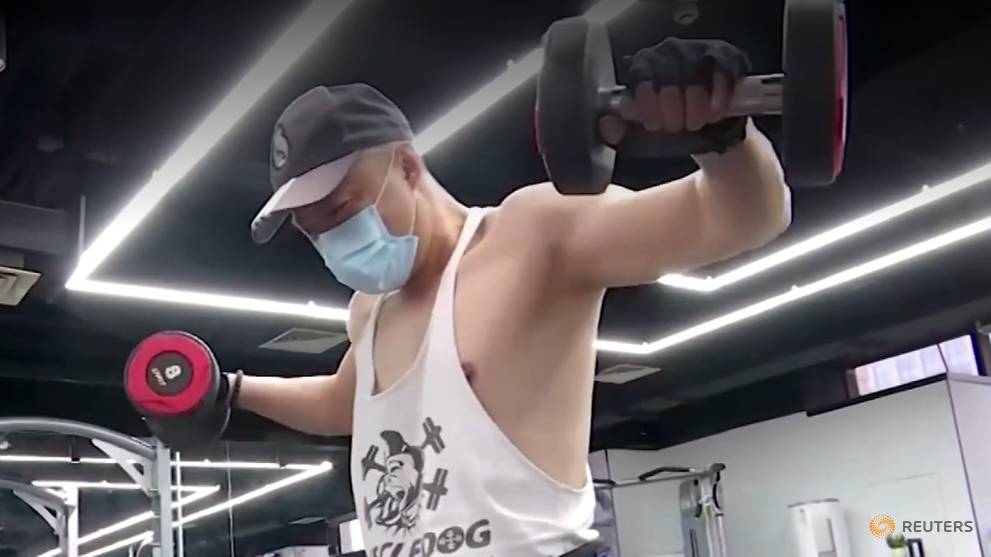 BEIJING: Grunts, groans and the sound of pulsing music and crashing weights have returned to some of Beijing’s gyms after being closed for nearly three months due to the COVID-19 outbreak.

With the respiratory illness under control in China, the economy has begun to open up again as authorities loosen lockdown restrictions including stay-at-home orders.

“After coming back to the gym I’ve been able to get my blood, my circulation going again and get my muscles flexed again,” said one gym enthusiast, surnamed Lu, 38, at Mi Fitness, one of the facilities which was allowed to reopen at the end of April.

“This kind of feeling is fantastic!” he said, after a few sets of lateral raises. Only gyms above ground level are currently allowed to operate provided they follow rules.

Temperatures are checked at the door and names and contacts are noted. Everyone must wear a mask unless they have difficulty breathing and maintain a distance of about 2m.

Mi Fitness is subject to three spot checks a day from the city’s sports authorities, the local government and the building’s management. A breach of the rules may shut down the business. A thorough cleaning of equipment is carried out regularly.

The fitness studio is on the eighth floor of an office building in west Beijing. During a visit by Reuters on Friday (May 8), all those working out observed the mask rule.

Some admitted it was a little uncomfortable to wear one while exercising, but 21-year-old student Peng Weichen was determined to see the positive side of things.

Several members including Peng’s training partner, Xu Haozhi, said they were glad to be back in the gym because the outbreak has taken a toll on their waistlines.

“If I don’t get some proper exercise soon,” Xu said. “I will be really, really fat.”

Li Chenglong, 26, a barista, said he was excited to be training again, but initially his muscles were not quite ready.

“After doing various different exercises my body would really feel it for at least a couple of days,” Li said. “It was quite painful.”

Gym co-founder Liu Mei said the re-opening came in the nick of time.

In early April after two months of no income and no certainty when Mi could re-open, Liu and her business partner considered giving up the business which only opened in 2019.

“I was really panicking before…the whole sector was in a state of panic,” she said.

Mi Fitness is for members only and gym users sign up for classes with a personal trainer. But Liu says they are now allowing people who want to work out on their own use the facilities for a month as many other gyms nearby are still closed. That has helped bring up the number of customers which average about a half-dozen per hour.

Although the lockdown to contain the spread of the novel coronavirus has eased, many people are still working from home or looking after their children and business is not what it used to be.

Despite these hurdles and concerns about a possible second wave of coronavirus, Liu says the fitness sector has a lot of promise.

“I really hope that all of those fellow gym owners who feel that they can’t stay afloat any longer, can keep going somehow because this sector does have a lot of potential,” Liu said. “When it comes to getting the nation fit and fighting and resisting this epidemic, I think that our sector should keep going.”

China has 82,887 cases of coronavirus and the death toll stands at 4,633, according to the national health authority.