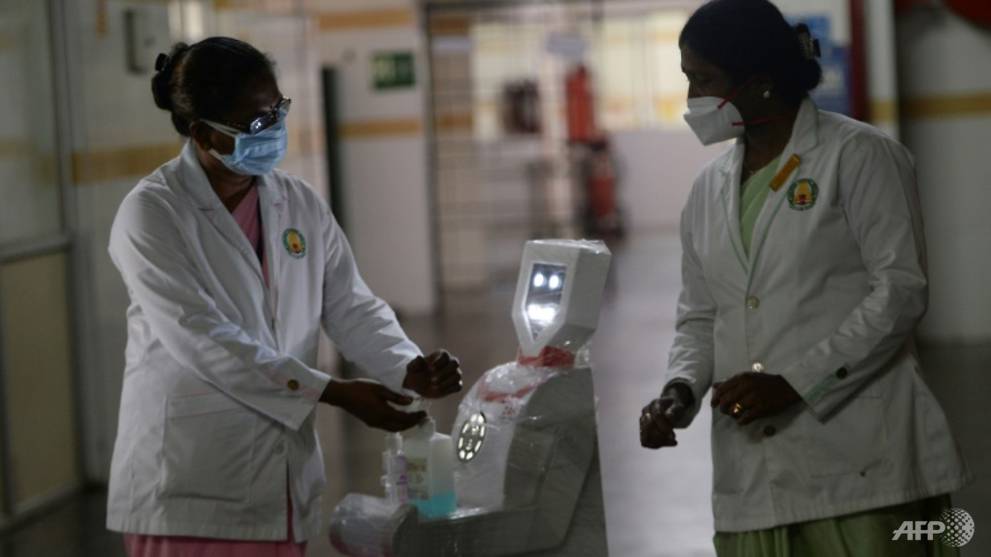 GLASGOW: Entrepreneurs and innovators across India have responded quickly to the challenge posed by the COVID-19 pandemic.

A host of new innovations, some emerging from start-ups that have been incubated by universities, have appeared in recent weeks.

There are a number of reasons for the quick response, including the urgency of the humanitarian situation and a proactive approach to crowdsourcing ideas from the government.

READ: Commentary: COVID-19 has stripped work to bare bones – was all that excess needed anyway?

Around the world, social distancing and contact tracing have been the buzzwords of the response to COVID-19. A particular problem as lockdowns begin to ease will be how to stop the virus spreading in public spaces such as airports or bus stations.

Asimov Robotics, a start-up based in Kerala, has deployed robots at entrances to office buildings and other public places to dispense hand sanitiser and deliver public health messages about the virus.

Other robots are also being deployed in hospital isolation wards to carry food and medicines, which eases the pressure on medical staff.

In early April, the Indian government launched a COVID-19 tracking app called Aarogya Setu which uses GPS and Bluetooth to inform people when they are at risk of exposure to COVID-19. The app was launched before a similar initiative from tech giants Google and Apple got off the ground.

Start-ups including KlinicApp and Practo are providing COVID-19 tests at home and online consultation with doctors through their platform.

READ: Commentary: Alibaba makes a whopping US$28 billion bet on its next breakthrough act

In response to the shortage of ventilators for critical care, start-ups such as Nocca Robotics (incubated at Indian Institute of Technology(IIT)-Kanpur), Aerobiosys Innovations (incubated at IIT Hyderabad) and AgVa Healthcare are developing low-cost, easy-to-use, and portable ventilators that can be deployed even in rural areas of India.

These ventilators would need medical regulatory approval before they could be deployed.

It sends COVID-19 updates and travel information via phone notifications, and via SMS to older phones for the less than half of India’s population without smartphones. These messages are delivered both in English and in Malayalam, the local language.

READ: Commentary: Forwarding a WhatsApp message on COVID-19 news? How to make sure you don’t spread misinformation

READ: Commentary: Tech is not all bad. Our COVID-19 experience shows this

The hygiene of public spaces is another area of notable innovation. Start-ups such as Aqoza technologies and PerSapien claim they have developed chemical formulations that disinfect public spaces.

Aqoza’s approach, developed during an outbreak of Nipah virus in Kerala in 2018, is a water-based sanitiser disinfectant, while Airlens minus Corona from PerSapien is a machine which the company claims dispenses ionised water droplets to oxidise the viral protein.

Another startup, Droom, claims it has come up with a special anti-microbial coating called Corona Shield, which inhibits the growth of microorganisms such as bacteria, algae, yeast, moulds, and mildew on the surfaces of vehicles. It is being tested by police in Gurugram in Haryana state.

Start-ups such as Marut Dronetech have partnered with state governments to test the use of drones to monitor adherence to social distancing rules. Drones are also being used to deliver medical supplies and even check people’s temperature using thermal imaging.

My conversations with some of these entrepreneurs and innovators from India have highlighted a good example of the triple helix model of innovation: Integrating efforts between universities, industries (start-ups) and the government, in response to COVID-19.

Although the active involvement of engineering volunteers from universities and industry is the lifeblood of these innovations, two other enabling factors are also particularly crucial.

First, intermediary organisations help to bring the three groups together.

For instance, the national government’s Department of Science and Technology has set up a task force to map technologies developed by start-ups related to COVID-19. It is also funding start-ups to develop relevant innovations such as rapid testing for the virus.

Another example is that of the Kerala Start-up Mission (KSUM), a government-supported entrepreneurship development agency.

It launched initiatives such as “Breath of Hope”, which brings together an interdisciplinary volunteer team of IT professionals, biomedical engineers and doctors to develop innovative medical devices. Start-ups such as Asimov Robotics and QKopy are part of KSUM.

Second, crowdsourced platforms have also proved to be an important channel for bringing together the wisdom from universities, industry and government.

The national government launched the COVID-19 solution challenge on March 16 that invites innovators to offer ideas and solutions for tackling the pandemic. Industry associations such as the Federation of Indian Chambers of Commerce and Industry collaborated in an online hackathon to develop non-medical solutions for COVID-19.

Similar crowdsourced platforms from start-up incubators such as BreakCorona received 1,300 ideas and 180 product solutions within two days of launch.

In another effort, volunteers set up an online crowdsourced portal called Coronasafe-Network, a real-time open-source public platform containing details on COVID-19 precautions, tools and responses which serves as a useful starter-kit for innovators.

India needs to sustain and enhance this entrepreneurial mindset to create the next wave of innovation that will not only continue the fight against COVID-19, but also boost socio-economic recovery once lock-down restrictions begin to ease.

Sreevas Sahasranamam is Chancellor’s Fellow in Entrepreneurship, Innovation, and Leadership at the University of Strathclyde. This commentary first appeared on The Conversation.