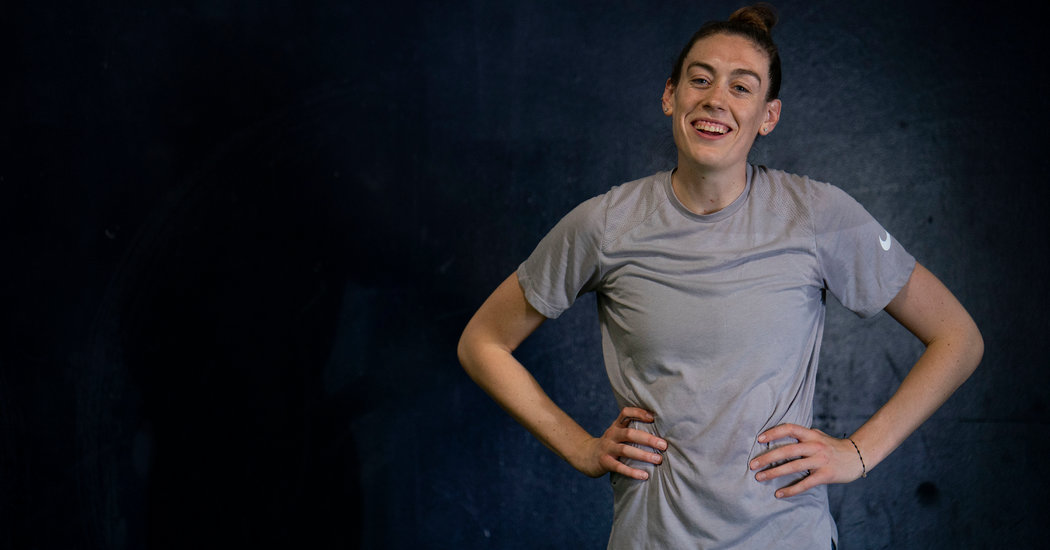 Along with the rest of the world, athletes have had their careers upended by the coronavirus pandemic. They are giving The New York Times an intimate look at their journeys in periodic installments through the rest of the year.

Over the last decade Breanna Stewart has dominated her sport as few ever have. She won four national titles in four seasons at the University of Connecticut — and won Most Outstanding Player in the Final Four each year — earned Olympic gold and was the W.N.B.A.’s Rookie of the Year in 2016. She led the Seattle Storm to a championship in 2018, winning the Most Valuable Player Award along the way.

That dominance has not been a golden parachute, though. As a pro, the slender, 6-foot-4 Stewart has followed other elite female basketball players who play nearly year-round, in foreign leagues in China and Europe to maximize their earnings. While playing for a Russian team in the 2019 EuroLeague championship game, Stewart ruptured her right Achilles’ tendon. After months of difficult post-surgery rehab and doubt, she was finally feeling like herself and readying for her first full season back in the W.N.B.A., which had been scheduled to start on May 15. Then the world changed.

This interview has been condensed and lightly edited for clarity.

Coming back after my surgery wasn’t easy. There were times I wondered if it was going to work out. In January, I started playing again, and I couldn’t wait for this year’s W.N.B.A. season. It felt like the league was about to take a real jump. But first I had to play in Russia again. And that’s where I was when all of a sudden, I began hearing about the coronavirus. The thing is, in Russia, I felt like I was on the outside of a fishbowl looking in, like for whatever reason we didn’t know as much about what was going on in the rest of the world. We were just late to the party over there.

When did it really hit me that this was serious? A teammate from Seattle, Sami Whitcomb, her French team was supposed to come play us in Russia. She texted me and said, “Hey, we’re not coming because we’re worried if we go to Russia, we’ll get stuck and won’t be able to get back.” That made me really feel how serious this was outside Russia. And then it’s like practically the next day when the N.B.A. is canceled. Just like that, we’re all scrambling to get home.

It was like diving straight into the fishbowl. The trip home to the United States, I’m just thinking, “I gotta get back, gotta get back, right away.” It doesn’t matter the flight, I was going to take it. I fly from the city where my team is to Moscow, then to Paris, to Boston, and finally Seattle. From airport to airport I could see the level of worry growing with each stop. I got what I think was one of the last flights to the U.S. from Paris. People were worried, scared, you could see it in their faces. I didn’t have a mask on. I had a scarf, I was doing whatever I could to cover my face, and I had gloves at the beginning but then my hands got so hot that I ended up taking them off. Nobody knew what to think. You touch your phone and you touch your face, who knows what can happen? When someone would cough, you’re like, “Whoa, do you have it?”

Things got way more serious when I got home. One of my best friends is Corey Edwards. Corey played in college and now he coaches high school in Florida. A few days after I got home to Seattle, his dad died from the coronavirus. His dad was Dave Edwards, who a lot of people in basketball know about, especially in New York. I knew him well. Not a lot of people call me by the nickname “Bree,” basically only people I’m really close to, but he called me that.

He was in his 40s and lived in New York, and when he was sick nobody could be with him in the hospital. I wanted to be there but couldn’t. New York was a madhouse. For a while it seemed like he was getting better. His fever was going down. And then, well, it spiraled out of control.

It was so painful when Corey’s father passed. I think it’s hitting me even more now than when it first happened. Right now, I’m just trying to be there for one of my best friends. When this happens to someone you care about, it puts everything into a whole different kind of perspective. I might not be able to play basketball for a while, and when it’s all said and done, with my injury, it might be two years before I play another season. But Corey, he can’t see his father again.

Don’t get me wrong, I miss basketball like crazy. It’s not only what I do for a profession, it’s what I love, even the simple feeling of a ball in my hands. If I could, I’d go and practice free throws all by myself, but there’s nowhere to do that and I’m taking this really seriously, so I stay inside as much as possible. I get out for walks sometimes. The neighborhood where I live is usually super busy, but now it feels abandoned and eerie. I do drive to rehab my leg a couple of times a week. Got to keep it strong. The calf on my injured leg atrophied like crazy and is still about a half-inch smaller than my other one.

I live in a two-bedroom apartment in downtown Seattle. My mom is my roommate right now and I have Stew, my Aussiedoodle, who wakes me up early every morning, wanting to go for a walk. To be honest, this quarantine life is very similar to life of an overseas women’s basketball player in a place like Russia. You get stuck inside a lot. You text, watch a lot of Netflix. A lot of screen time. I’ve watched the video of the injury. I watched our 2018 W.N.B.A. semifinal series, Seattle against Phoenix, a bunch of times. I’ve played in a lot of great games, but Game 5 of that series was probably the best game I’ve ever played in.

Some of the N.B.A. guys, they’re hooping at the gym in their houses. Me? I can’t hoop at all. I can’t exactly put up a hoop in my condo. I don’t think that’s going to go over that well. But I’ll find myself randomly grabbing a ball, spinning it, just to feel that feeling. Sometimes I’ll even end up dribbling in the condo because that’s all I have right now. The people below me, hopefully they don’t mind.