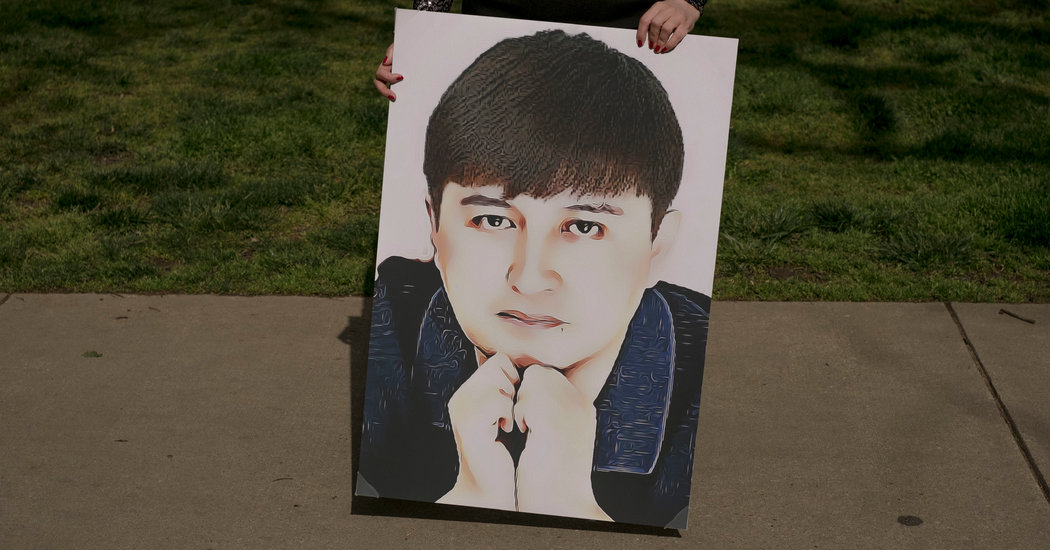 WASHINGTON — When Ekpar Asat saw his older sister for the last time one winter night in Manhattan, he promised her he would return to the United States in a few months with their parents to watch her graduate with a master’s degree from Harvard Law School — the first ethnic Uighur to do so.

This winter, his sister, Rayhan Asat, heard that he had been sentenced to 15 years in prison on suspicion of inciting ethnic hatred.

“It’s so upsetting,” she said. “After he came to the U.S., he had an elevated profile, and then he was labeled an enemy of the state.”

Ms. Asat, a lawyer and permanent American resident in Washington, described her 34-year-old brother as a model citizen — an entrepreneur who founded a social media app for Uighurs and took part in state-organized events. Their parents are members of the Communist Party. The mother retired as a chemistry professor and the father as a civil servant in water resources administration.

But Ms. Asat said the State Department project, the International Visitor Leadership Program, which for 80 years has trained many prominent foreign citizens, appears to have tainted her brother in the eyes of Chinese security officers.

Though department officials have raised Mr. Asat’s case with Chinese counterparts, Ms. Asat is now calling for the agency to escalate its efforts — especially because he appears to have been detained and convicted of crimes based on his association with the program, she said. She stressed, though, that the weeks he had spent in the United States had been a positive experience.

“I told the State Department this was the very reason that he was in danger,” Ms. Asat, 36, said. “When the United States organizes these programs and brings over these people, we have to protect them after the fact so these programs can be successful.”

“We call on Beijing to immediately release all those arbitrarily detained, and to end its draconian policies which have forcibly indoctrinated and intimidated its own citizens in Xinjiang,” she added, referring to China’s northwest region, where most Uighurs live.

The State Department mentioned Mr. Asat in its 2019 human rights report on China, which said he apparently had been detained in 2016 “after participating in a program in the United States” and then was sentenced to 15 years in prison. The report, which identifies Mr. Asat by his official Chinese name, Aikebaier Aisaiti, also described the “mass arbitrary detention” of Muslims in Xinjiang.

A State Department official said the agency had no “direct evidence” that the imprisonment of Mr. Asat occurred because of the leadership program.

John Kamm, a human rights advocate in California who has advised Ms. Asat, said the State Department should make public cases of persecution that might be linked to its programs.

“I think it’s simply prudent,” he said. “I’m not calling for canceling the program.”

The Chinese Foreign Ministry in Beijing said it had no information on Mr. Asat, and the Xinjiang regional government did not answer submitted questions.

The fact that Mr. Asat ran a social media app with about 100,000 users might also have made Chinese officials suspicious, since they are wary of online mass communications. But Ms. Asat said her brother was careful to abide by censorship rules.

Ms. Asat said she learned of her brother’s fate in January. The Chinese Embassy in Washington sent an email to the office of Senator Chris Coons, Democrat of Delaware, telling them about Mr. Asat’s 15-year sentence. That was in response to a bipartisan letter that the senator and six other lawmakers, including Senator Todd Young, Republican of Indiana, sent Ambassador Cui Tiankai in December urging China to release Mr. Asat.

Mr. Coons said in a statement that he was “deeply concerned” about the repression in Xinjiang. “China must be held accountable for this gross abuse of human rights against Aikebaier and other innocent people,” he added.

Senator Mitch McConnell, the majority leader, said this week that the Senate would move soon to pass a bipartisan bill, the Uighur Human Rights Policy Act, that would compel President Trump to take tough measures against China on Xinjiang, including imposing sanctions on some officials. Tensions between Washington and Beijing have risen sharply during the pandemic, which began in central China.

Ms. Asat said the accusation of ethnic hatred was absurd. She pointed to state-run news reports that featured her brother’s business or his participation in government-sponsored events. “They always said he was a bridge builder between the ethnic minorities and the majority Han,” she said.

In 2014, Mr. Asat was among a small group of businesspeople selected to meet with Max Baucus, then the American ambassador to China, who had traveled to Xinjiang.

The United States Embassy in Beijing then encouraged Mr. Asat to apply for the State Department’s leadership program, Ms. Asat said. After being accepted, he flew to the United States in February 2016, where he completed a three-week program for journalists that introduced him to institutions and figures across Washington and five states. There were eight other participants.

“He was by far the most curious of the group; he was constantly asking questions,” said Sheridan Bell, a former diplomat and senior program manager at Meridian International Center, a nonprofit group that runs the program for the State Department.

“He focused his questions on the line between doing what your bosses want you to do and telling the truth — the narrow line between doing your job as a journalist and propaganda,” he added. “He was very cautious. I can’t imagine he said things that would have gotten him into trouble.”

The State Department’s website says the program has trained more than 225,000 people since its inception in 1940. Prominent alumni include Margaret Thatcher, the former prime minister of Britain, and Jacinda Ardern, the current prime minister of New Zealand. The courses focus on different industries and professions.

Mr. Bell said Chinese participants are often affiliated with the Communist Party or the government. One alumnus of a U.S. foreign policy program is Xie Feng, now the Foreign Ministry’s commissioner in Hong Kong. There have been occasional ethnic minority participants, including Tibetans.

Mr. Asat was effusive about the program. While in Washington, he wrote on WeChat, the Chinese social media app: “It’s an incredible honor to participate in the I.V.L.P. I hope to gain profound insight into American culture and media!”

He posted photographs of his travels. He posed with Americans to whom he had given traditional Uighur hats and scarves. He sat in a Formula One racecar in Florida, attended an N.B.A. game in Indiana and posed next to the CNN logo at the network’s headquarters in Georgia.

Ms. Asat, who was studying for her master of laws at Harvard after having lived outside China since 2009, flew to Washington for a job interview while her brother was there. The two had dinner at Clyde’s of Georgetown, then went for a stroll by the shops along M Street.

She saw him once more afterward, for a few hours in New York. He told her that since he now had a visa to enter the United States, he would return in May with their parents for her graduation.

“He was inspired,” she said. “He wanted to spend the summer here and learn more English. He liked the tech landscape and wanted to learn more about how to innovate his company.”

Ms. Asat said she felt guilty for not having spent more time with her brother. “There is so much regret,” she said.

After Mr. Asat returned to their home city of Urumqi, nothing seemed unusual at first. He helped sponsor an international boxing tournament that was covered by China Central Television, the state-run network. He stood in the ring next to a famous Uighur boxer holding up a trophy.

Then Ms. Asat stopped hearing from him. No new messages appeared on his WeChat account after April 7. Someone froze his app, Bagdax, later that month.

Her parents told her they would not attend her graduation.

During what should have been a high point in her life — graduating from Harvard — Ms. Asat was distraught and in tears.

She soon began working in the Washington office of a Wall Street law firm. As public reports have emerged of the mass detentions in Xinjiang, she has tried quietly to get the State Department, the White House National Security Council and congressional offices to press for her brother’s freedom.

She sometimes speaks briefly with family members in Xinjiang, but it is all small talk. They avoid discussing her brother.

In early March, two months after finding out about his sentencing, she decided to speak publicly at Harvard Law School about his case and the crisis in Xinjiang.

“I know from trying to help Rayhan Asat over the past four years that she is a person of real courage and integrity,” said William P. Alford, the law professor who hosted the talk. “The case of her brother, arrested right after returning from the U.S. and largely shrouded by Chinese authorities, is tragic.”

Ms. Asat said she was aware her family might suffer reprisals as a result of her speaking out. That has happened to other Uighurs abroad. But she said her brother’s ordeal had made her realize that no matter what she and her family do to conform as model citizens, the Chinese government sees Uighurs “forever as outsiders.”

“When you grow up in China, you’re not supposed to engage in politics,” she said. “But China is pushing me to become political.”