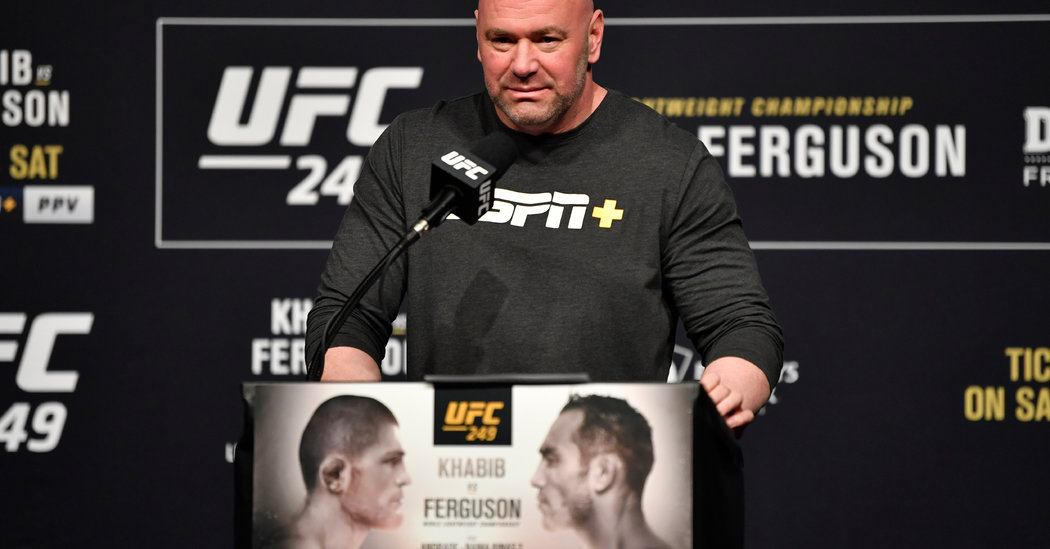 When Tony Ferguson and Justin Gaethje step into the octagon Saturday night in Jacksonville, Fla., their interim lightweight title bout will be the climax of U.F.C. 249, the biggest sporting event to take place in the United States in almost two months. It will also be a triumph for Dana White, the bellicose president of the Ultimate Fighting Championship. If it were up to White, he never would have stopped staging mixed martial arts fights, coronavirus pandemic be damned.

For two decades, White has insisted that his sport would become the world’s biggest. This weekend, he will get a spotlight commensurate with his ambitions, for one night, at least, and perhaps longer if the U.F.C.’s plans for at least three more events in May proceed without significant setbacks.

But if U.F.C. 249 demonstrates White’s unquenchable desire to rule the sports world, it has also emphasized some of the liabilities of his hard-charging style and a few possible cracks in the U.F.C.’s business model.

White’s attempts to keep fights going during the pandemic have drawn rebukes from powerful politicians and from his most important corporate partners, Disney and ESPN. The scrutiny, in part, reflected higher expectations of respectability from an organization that was long regarded as a lowbrow curiosity.

For most of White’s tenure as president, the organization was owned by Las Vegas casino moguls and answerable to virtually nobody. Founded in 1993, the U.F.C. was bought in 2001 for $2 million by Lorenzo and Frank Fertitta, brothers who owned Station Casinos and were childhood friends of White, whom they immediately put in charge. They sold the U.F.C. in 2016 for around $4 billion, capping a transformation for which White deserves much of the credit.

The U.F.C.’s new primary owner, Endeavor, is a live-events conglomerate that has aimed to become a public company but has seen its business devastated by the pandemic. Endeavor executives have made it clear that they consider White one of the U.F.C.’s leading assets, but the president’s unyielding control over fighters has been challenged in a long-running lawsuit that could shift substantial revenue to the athletes and undermine some of White’s grand plans.

“He lives for the people in his face telling him he can’t do it, he can’t win, it won’t happen,” Mark Shapiro, the president of Endeavor, said of White. “That just fuels him, it is like diesel in his veins.”

White declined to speak to The New York Times for this article.

The sport was shunned for years.

In the early days, after White persuaded the Fertitta brothers to purchase the U.F.C. and install him as president, there were scores of adversaries. Many states and countries viewed the U.F.C. as excessively violent and refused to approve its bouts, and network television turned up its nose, too.

There were also competing mixed martial arts organizations, fighters and managers whom White perceived as greedy, and a news media that celebrated boxing as the sweet science yet largely looked down upon White’s sport as unsophisticated brawling.

White is a boxing fan, and before discovering mixed martial arts, he taught boxing classes in Boston and Las Vegas. Yet when he took over the U.F.C., he looked not toward boxing but to professional wrestling for a framework.

Boxers have more freedom and power to dictate financial terms than mixed martial arts fighters, in large part because of the Muhammad Ali Boxing Reform Act, enacted in 2000. The Ali Act requires promoters to share financial information and bans long contracts that tended to underpay emerging stars, among other regulations.

The U.F.C. largely signs fighters to long-term contracts — under which they are paid only when they compete — then dictates when, where and against whom they will compete. The company hired lobbyists in Washington to fight any extension of the Ali Act to mixed martial arts.

One of the great contradictions of the U.F.C. is that before White became president he worked as a manager and once held a fighter, Tito Ortiz, out of an event, the type of insubordination he now rages against.

“Dana White the promoter would call Dana White the manager a scumbag,” said Josh Gross, a mixed martial arts reporter for The Athletic, whose reporting has so angered the U.F.C. that Gross has not received a credential to cover a U.F.C. event for 15 years, something almost unthinkable in the other major American sports.

‘He doesn’t know anything else.’

White, who owned 9 percent of the U.F.C. when it was sold in 2016, netted over $300 million from the deal. The Las Vegas mansion he shares with his wife and children has a basketball court, a personal gym, an arcade room and an enormous outdoor pool. Four years after reaping a personal windfall to rival any star prizefighter’s, why is he working 14-hour days scouring the globe for fight locations instead of floating in his pool?

“Because that’s him,” Shapiro said. “He doesn’t know anything else. He wouldn’t be satisfied, he wouldn’t be content, if he wasn’t making and promoting fights.”

Under Endeavor, the U.F.C.’s growth has been fueled most clearly by its long-term television agreement with ESPN, a deal that was signed in 2018. ESPN pays the U.F.C. $300 million annually to show 30 events on its cable channels and streaming service. ESPN also paid an undisclosed sum for the exclusive rights to sell 10 pay-per-view events, like U.F.C. 249, each year.

While giving the U.F.C. a higher financial floor for each of its events, Endeavor and ESPN have also presented the U.F.C. with substantial challenges. Before the pandemic, Endeavor carried $4.6 billion in debt. It canceled an initial public offering last year.

Built primarily around live events in sports, entertainment and fashion, Endeavor has laid off, furloughed or cut the pay of one-third of its 7,500 worldwide employees in the past month and canceled a scheduled $300 million dividend payment from the U.F.C. Notably, though, no employees at the U.F.C. have been affected, a point White has made repeatedly.

U.F.C. 249 was originally scheduled to be held in New York, before the pandemic shut down sports across the country. White brewed up a plan to hold the event on tribal land in California to evade stay-at-home orders, an effort that backfired after California state officials contacted Disney, the parent company of ESPN, to express concerns. ESPN then told White that it would not telecast them, forcing the postponement of U.F.C. 249.

U.F.C. and Endeavor officials insist their determination to stage fights during the pandemic is not due to financial pressures.

“We are not putting fights on to satisfy any contracts or because of any particular financial situation at Endeavor,” Shapiro said, adding that Endeavor had enough money to pay its debt service obligations and contracts for this year and beyond, as well as access to capital to stay solvent.

Though stay-at-home orders are slowly lifting in some states, most still aren’t allowing entertainment events that involve the number of people that the U.F.C. generally needs to stage fights. But in an unusual exception, employees of professional sports organizations are deemed essential workers in Florida, and the state’s boxing commission has approved the U.F.C.’s fights.

Meeting legal and safety standards for a typical fight, however, is far different from preparing to cope with a virus spread through person-to-person contact. And though spectators will not be admitted to Saturday’s bouts, the U.F.C. has not gone to great lengths to reassure the public about how exactly it will protect 24 fighters, as well as the necessary production staff, from the coronavirus.

“We don’t need it decided in the court of public opinion,” Shapiro said. White has boasted of a 30-page document outlining health and safety precautions that was presented to state officials in Florida, but the document has not been made available publicly.

Soon after the U.F.C. canceled its plans for fights on tribal land, the top executive at the company’s biggest competitor said he was surprised that White was willing to take such risks.

“At the end of the day, if somebody gets sick, somebody dies on your watch, it is not going to be something that they want to live with,” said Scott Coker, the president of Bellator M.M.A., which has canceled its events for May and early June.

White has said that any fighter who feels uncomfortable doesn’t have to compete during the pandemic, but such a decision could have severe financial consequences.

U.F.C. fighters do not receive regular salaries; they are paid only when they enter the octagon. And because White controls when they will compete in the future, as well as fight-night bonuses, fighters could fear they are risking their careers by speaking up if they do not believe it is safe to compete.

Several fighters have criticized White in personal terms over the years, usually near the end of their careers. The former heavyweight fighter Mark Hunt, who unsuccessfully sued the U.F.C. in a dispute over a $2.5 million purse, called White a “thieving little grub” in a video last month. White has been called a bully by both the former featherweight champion Cristiane Justino, known as Cyborg, and the former heavyweight Brendan Schaub, who has said White “motivates by fear.”

Six years ago, a handful of fighters filed a class-action lawsuit against the U.F.C.; it is slowly winding its way through the federal court system. The fighters are seeking shorter contracts and a higher percentage of the U.F.C.’s revenue, among other things.

At a hearing in the case last year, an Endeavor financial presentation was entered into the record. It revealed that potential investors most frequently asked about fighter compensation, a cost that could skyrocket if the U.F.C. loses the lawsuit.

Just days after the U.F.C. was sold to Endeavor, White appeared at the Republican National Convention to speak in support of the party’s presidential nominee, Donald J. Trump, a decision that was opposed within his own company.

“I said, ‘This is a bad idea, we don’t want to get involved in politics,’” said Lawrence Epstein, the chief operating officer of the U.F.C. “We want everyone to be a U.F.C. fan.”

The first U.F.C. event under White was held at the Trump Taj Mahal in Atlantic City in 2001, when the sport was still banned in many states. White wanted to show loyalty to his old friend, whatever the consequences. “He is someone who will live by his own code,” Epstein said.

A sports executive in the mold of a traditional league commissioner would not have spoken at a political convention or forced a television partner into the embarrassing position of essentially pulling the plug on an event days before it was scheduled to begin.

For better or for worse, Dana White is not that executive. He never has been and never will be.

But to the people who matter, he is vital to the U.F.C.’s future.

“Unequivocally, we would never have bought the U.F.C. if Dana hadn’t agreed upfront to stick around,” Shapiro said. He wouldn’t discuss whether White had recently signed a contract extension, but said he expected him “to continue being the president of the U.F.C. for the long future.”