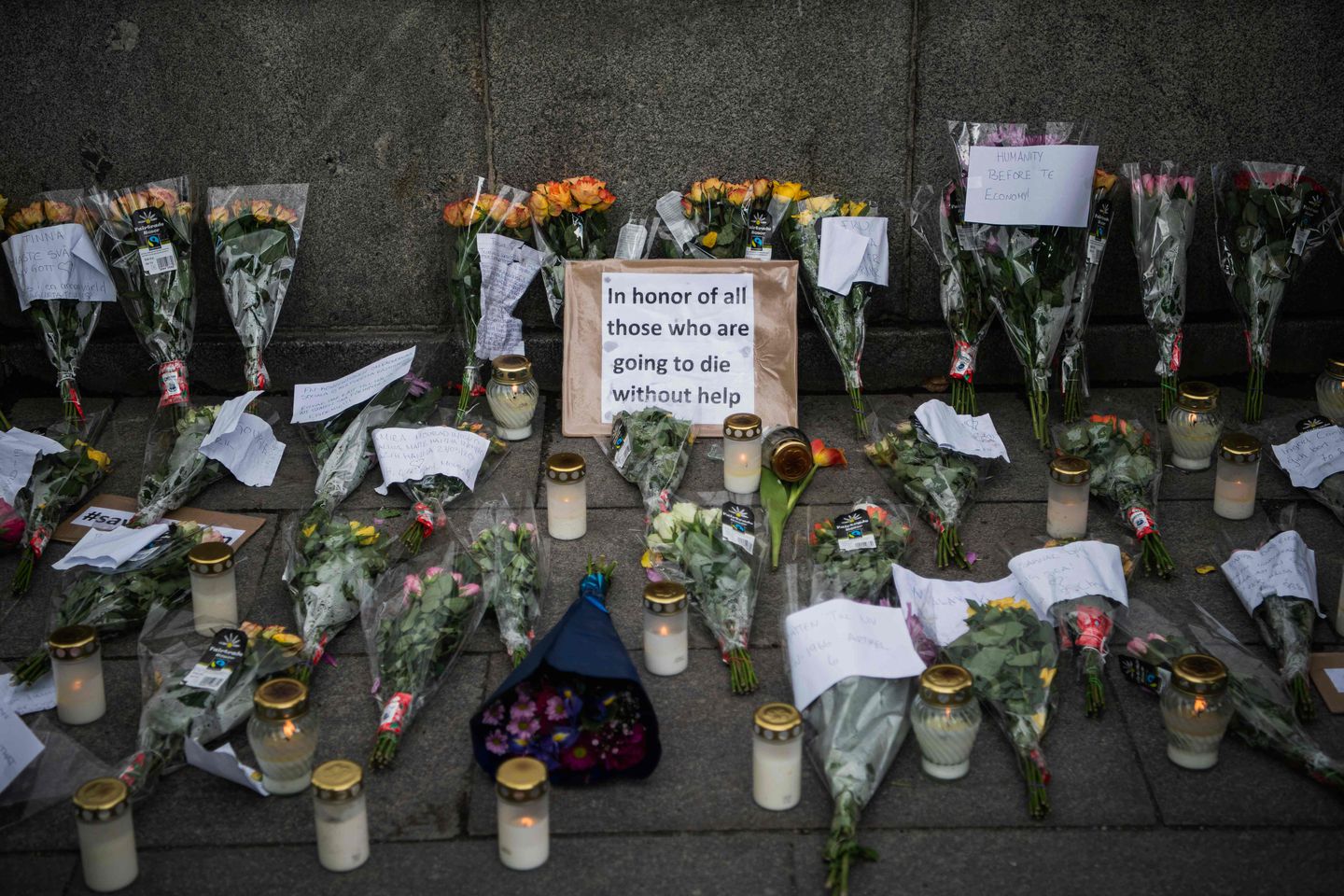 The two countries went in two very different directions. After a weeks-long delay, Britain ordered a strict lockdown in late March. Sweden has glided along with much more relaxed, voluntary guidance, trusting its citizens to use their common sense and maintain reasonable social distancing.

London has been a ghost town, its economy shattered like most, but all through March, April and early May, you could still dine at restaurants in Stockholm or drink a cold Pilsener on a sunny patio bar. Swedish children go to elementary and middle school. Shops and gyms, factories and yoga studios are open — often thronged. Throughout the pandemic, life has looked much more “normal” in Sweden.

Leaders of Sweden and Britain both claim they have been “guided by the science” — and both countries have seen soaring numbers of deaths.

So are scientists in both countries wrong? Or right, but in different ways? Or is it too soon to know what is really going on?

The former chief epidemiologist for Sweden, Johan Giesecke, an internationally recognized expert who advises the World Health Organization, has been blasting away at the British government’s abrupt decision to reverse itself and mandate a complete lockdown on March 23.

Initially, Britain signaled it would pursue a go-slow approach to allow the pathogen to circulate more widely and begin to create what virologists call “herd immunity.”

“Our aim is not to stop everyone getting it. You can’t do that. And it’s not desirable, because you want to get some immunity in the population. We need to have immunity to protect ourselves in the future,” Britain’s chief scientific adviser, Patrick Vallance, said March 12.

Giesecke says Britain was on the right path, alongside Sweden. But it all came to a full stop with the appearance of a “famous paper” by the epidemiologist Neil Ferguson and his Covid-19 Response Team at Imperial College London, published March 16. Ferguson and team are seen as a gold standard by many epidemiologists, and their paper contained jaw-dropping numbers.

Giesecke argues that Ferguson’s mathematical simulation shocked the British government and convinced it to do “a 180-degree U-turn” and to panic.

The Ferguson model was quickly embraced at the highest levels on both sides of the Atlantic, first by Downing Street and then the White House.

If nothing at all were done to stop this novel virus infecting a naive population, then 510,00 people in Britain and 2.2 million in the United States would die in a tsunami of infections that would overwhelm each country’s hospitals, Ferguson’s group asserted.

But Britain was never going to do nothing.

Instead, Prime Minister Boris Johnson’s government first proposed a middle way, with less-than-drastic measures, a “mitigation” strategy much like the one Sweden has pursued.

Ferguson and his modelers, however, warned that even such a mitigation strategy, which focused on slowing but not necessarily stopping epidemic spread, meant that 250,000 would still die in Britain. Public health officials quickly imagined thousands of breathless patients succumbing in hospital parking lots, as emergency room physicians were forced to ration access to ICU beds and precious ventilators.

And so Johnson’s government ultimately went with a full lockdown, an all-in attempt to suppress the spread of the virus as much as possible. Those who support lockdowns say the main thing Britain did wrong was wait too long, giving the virus a significant head start.

Giesecke has been unusually blunt in calling the Ferguson model “not very good” and “overly pessimistic.” He noted it was neither peer-reviewed nor published in a scientific journal and said in a webinar briefing conducted by Chatham House, the London-based think tank, that he thought someone should write a book about “how a not very scientific paper changed the policy of an entire country.”

In an interview with The Washington Post, Giesecke said the Imperial College forecasts were almost hysterical and the Ferguson paper so fundamentally flawed by debatable assumptions — for example, the percentage of people who were asymptomatic but still infectious — that “it loses all value” as a predictive tool.

Scientists fight all the time, but this debate among top-flight infectious disease modelers in Stockholm and London is eyeball-grabbing because it has burst into the open via Twitter and Zoom chat, and think tank teleconference and on YouTube, most prominently in a duet of interviews conducted by its editor Freddie Sayers for the online magazine UnHerd.com.

In that interview, Ferguson fired back at his Swedish critics, claiming that “the majority of epidemiologists in the world support my position.” Even in Sweden, some scientists charged their government was “playing Russian roulette” with the population.

Ferguson countered that the Swedish government took “a decision most other countries would not tolerate,” meaning to let the virus run more free. He said of Giesecke, “He’s basically saying we should allow all these old people to die — because he doesn’t believe we can keep these measures in place.”

Ferguson said that “Sweden is still seeing increases in deaths and cases” and that Sweden’s mortality rates were “approaching New York City,” which has seen the greatest overall numbers of death in the United States so far. He said Britain, by contrast, “acted in time to keep the nation from being overwhelmed.”

Ferguson, who did not respond to requests for an interview with The Washington Post, had been guiding Britain through its epidemic until this week. (He gave up his role with the British government’s Scientific Advisory Group for Emergencies, which has been steering policy, after the Daily Telegraph newspaper reported he had broken social distancing measures by meeting with his married lover at his home. Ferguson has acknowledged making an “error of judgment.”)

The British prime minister is certainly a convert to Ferguson’s forecast. In Johnson’s first news conference after being stricken by the virus, which almost killed him, he argued that Britain avoided “an uncontrollable and catastrophic” epidemic that could have caused half a million deaths, and he cited Ferguson’s worst-case-scenario numbers.

President Trump, too, has alluded to the Ferguson forecasts, boasting of the millions of lives his policies have saved.

The pandemic remains far from over. But at this moment, Britain’s death toll of more than 30,000 is the highest in Europe. Meanwhile, deaths in Sweden are the highest in Scandinavia, with 3,000 killed by the virus so far. Britain’s population is 66 million, and Sweden’s is 10 million.

It’s unclear whether there are cultural, demographic or geographic factors that might make Giesecke’s approach more suitable for Sweden than Britain or some other countries.

But the World Health Organization has suggested that Sweden isn’t an outlier. “If we are to reach a ‘new normal,’ in many ways Sweden represents a future model,” Mike Ryan, the WHO’s top emergencies expert, said last week. “What it has done differently is that it really, really has trusted its own communities to implement that physical distancing.”

Britain has bet that it bought enough time by lockdown to protect its National Health Service and prepare itself for a possible second wave, by ramping up testing, tracing and quarantines for the sick.

Giesecke argues that the virus is essentially unstoppable, until either herd immunity is reached (when two-thirds of a population has been infected and is producing antibodies) or an effective vaccine is widely available, perhaps nine to 18 months from now, according to the most hopeful projections. In a letter to the British medical journal Lancet, Giesecke wrote that “everyone will be exposed” and the strict lockdowns only push severe cases into the future.

Giesecke said that both Britain and Sweden failed its elderly by letting the virus run rampant in nursing and care homes, where deaths might account for as much as a third of totals.

“We’ve failed. We’ve all failed to protect them,” Giesecke said.

The Swedish epidemiologist says that yes, of course, imposing a strict lockdown will slow the spread of infections for a while. “But then, what next?” he asked. Giesecke said no democratic society can remain in lockdown for many months or years. Their economies cannot withstand it, and the public won’t allow it.

Asked why Britain and other countries went with hard lockdown, Giesecke said political leaders want to show leadership — force, decisiveness, strength. He said that “people aren’t stupid” and that if you tell them it’s important to keep their distance or wear masks or wash their hands, they will.

Though it is clearly not easy for everyone to obey the guidance all the time.