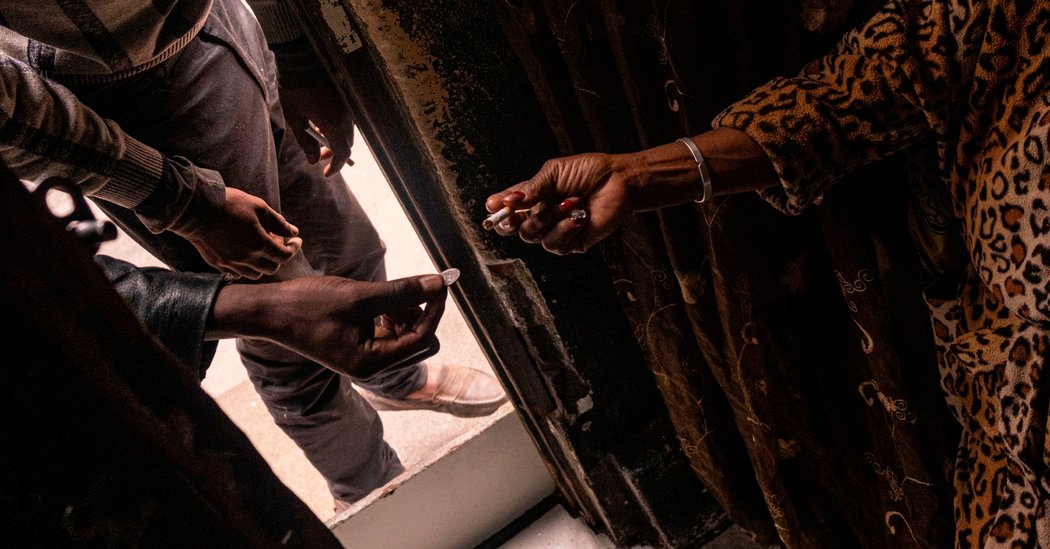 JOHANNESBURG — The dealer had a stash, but the young woman wasn’t getting through the door without an introduction. That’s where her friend, already a trusted customer, came in. And even then there were complications.

The woman wanted Stuyvesants. The dealer had Courtleighs. But in a South Africa where the sale of cigarettes is newly illegal, quibblers risk nicotine fits.

She took the Courtleighs and high-tailed it out of there.

“I feel like I’m buying cocaine,” said the woman, 29, who asked not to be named for fear of being fined or arrested.

In late March, in the midst of the coronavirus outbreak, the South African government banned the sale of tobacco and alcohol as part of a broad lockdown — one of the most strict anywhere. But even as the government has begun rolling back the lockdown, the bans remain in effect.

Ms. Dlamini-Zuma, a doctor who served as health minister in the 1990’s and is now cooperative governance minister, said that “besides the effects itself on the person’s lungs,” there were concerns that smoking could promote coronavirus infection.

“The way sometimes tobacco is shared does not allow for social distancing,” she said, “but actually encourages the spread of the virus.”

Defending the ban of alcohol sales amid cries of protest from the liquor industry, President Cyril Ramaphosa said alcohol was “a hindrance to the fight against coronavirus.”

“There are proven links between the sale and consumption of alcohol and violent crime, motor vehicle accidents and other medical emergencies at a time when all public and private resources should be preparing to receive and treat vast numbers of Covid-19 patients,” the president said in a statement.

The government has also cited the risk of domestic violence in households where families are isolated at home.

Perhaps not surprisingly, an underground market in both cigarettes and alcohol quickly sprung up.

Like bootleg markets everywhere, it relies on word of mouth, as the 29-year-old woman who settled for the Courtleighs soon learned.

She made her purchase in a suburb of Vereeniging, a city south of Johannesburg, where dealers are said to sell only to buyers referred by someone they know. And they sell only from their homes to avoid driving around with large quantities of cigarettes, since if they were to be caught at one of the dozens of police roadblocks set up around the country, they could be arrested on the spot.

Instead, the smoker carries the risk — and the cost. A pack of 20 cigarettes now goes for upward of 150 rand (about $8), three times the old legal price. Underground alcohol prices have also skyrocketed. A bottle of low-end vodka that usually sells for 120 rand ($6) now sells for at least 400 rand ($21).

South Africa lifted its nationwide lockdown on May 1, but is continuing to implement strict social distancing and face mask rules. Already under siege from H.I.V., the country has around 8,200 confirmed cases of coronavirus and has reported about 160 deaths.

The country had implemented one of the world’s most stringent lockdowns after recording its first coronavirus-related death in March. In addition to banning the sale of cigarettes and alcohol, the regulations banned jogging and dog-walking, and shuttered parks.

Before the lockdown, with a ban looming, some smokers stocked up on cartons of cigarettes. But when the ban on cigarettes was extended beyond May 1, things for smokers began to grow tense.

Now, it’s a matter of who you know. The cafe owner willing to slip a box under a container of milk, perhaps, or a supermarket cashier willing to steal and resell cigarettes languishing in the storeroom.

In one Pretoria township where everyone knows everyone — including the police — few dare sell cigarettes from their homes. Instead, dealers hide among young men milling around on the neighborhood corner.

A 23-year-old smoker said that when he saw a group of four men sharing a cigarette, he approached them to find out where they had found the contraband. They just so happened to be selling, they told him.

Desperate after a failed attempt to quit smoking, he said, he paid 160 rand for his favorite brand and “ran home,” where he took a photograph of the sealed pack, planning to share it on WhatsApp with envious fellow smokers.

But when he opened the pack, a cloud of sawdust choked him. There was not a cigarette to be found.

Smokers say they are finding fake cigarettes in sealed boxes that look exactly like legitimate brands. And those who are desperate enough are buying unknown brands that have appeared during the lockdown with names like Pineapple and Chestel, and are notorious for inducing immediate coughing.

The tobacco industry has not taken kindly to the government’s new policy.

The ban has fueled an underground cigarette trade that was thriving even before the lockdown. By some estimates, it made up more than 30 percent of the market, depriving the above ground tobacco industry of profit and the government of tax revenue.

Now both industry and government are losing even more.

The country’s largest cigarette manufacturer, British American Tobacco South Africa, at one point threatened legal action if the government did not drop its ban, but on Wednesday changed course. “We have taken the decision not to pursue legal action at this stage,” it said in a statement, “but, instead, to pursue further discussions with government.”

The company said, “We are convinced that by working together we can find a better solution that works for all South Africans and removes the threat of criminal sanction from 11 million tobacco consumers in the country.”

The ban on cigarettes and alcohol has set off a debate on civil liberties in a country with one of the world’s most liberal constitutions. While South Africa was an early adopter of public smoking regulations, many see the bans as a symbol of government overreach.

Though its coronavirus policies may have succeeded in keeping the outbreak in check, some are calling the government hypocritical. Junk food remains readily available. And officials strictly limited outdoor exercise during the lockdown.

In a country increasingly struggling with diabetes and obesity, such inconsistencies undercut the government’s argument that it is guarding the public’s health, said one South African constitutional law expert, Pierre De Vos.

“In the long term, if the government overreaches and it wants to continue imposing these limits when the threat has subsided, I think the courts will invalidate this,” he said.

Still, the ban may have yielded at least one former smoker: the man who bought the box of sawdust.

“I cannot just go around losing money like that,” he said. “I just said to myself: ‘Nah, man, it’s not worth it. I’ll stay home and eat sweets, as that’s what’s legal now.’”