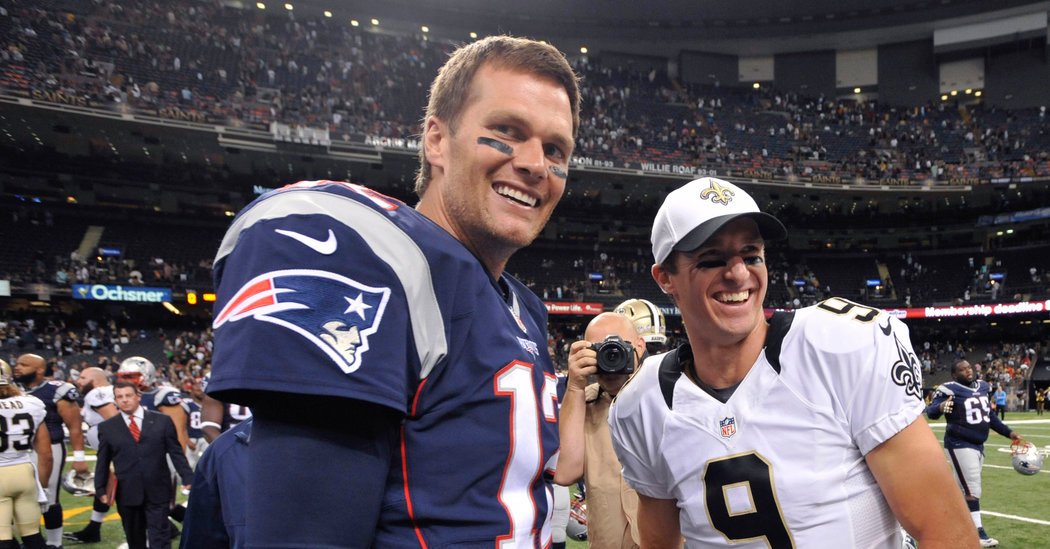 In a time of great uncertainty, the N.F.L.’s 2020 regular-season schedule, which was revealed Thursday night, abounds with optimism. A full 17-week slate was released, with no obvious contingency plan in case the coronavirus pandemic prevents the season from starting on time.

The league, for instance, did not front-load the schedule with non-conference matchups that, with little to no bearing on postseason tiebreakers, could be lopped off if necessary. Instead, it proceeded as normal, studding the opening week with appealing games, such as Tom Brady’s debut with Tampa Bay, in New Orleans.

As is customary for the Super Bowl champions, the Kansas City Chiefs will play the season’s first game, Sept. 10 at home against the Houston Texans, in the first of their five prime-time appearances. The Buccaneers and the Patriots — Brady’s new and former teams — are among those that will also land in prime time five times, but, alas, not against each other. That will have to wait. In the meantime, here are some of the season’s most compelling matchups:

Chiefs at Ravens, Monday, Sept. 28: Quarterbacks Lamar Jackson and Patrick Mahomes have played against each other twice as professionals, and considering both the quality of their teams and their own general awesomeness, reprises of their matchups may define the N.F.L.’s next decade, à la Tom Brady and Peyton Manning during the 2000s. Between them, Jackson and Mahomes have won the league’s last two Most Valuable Player Awards, and Mahomes is the reigning Super Bowl M.V.P. They are the most exciting players on the best teams in the A.F.C., and if they were playing at 3 a.m. in Kyrgyzstan we would watch.

Buccaneers at Saints, Sept. 13: Two words: Tom Brady. Two more words: Drew Brees. For the two quarterbacks who have thrown the most touchdown passes, and for the most yardage, in N.F.L. history, this enticing opener is laden with meaning — the grand unveiling of Brady, after 20 years in New England, with the Tampa Bay Buccaneers, and the start of what could be Brees’s final season. They will be a combined 84 years old when Tompa Bay and Drew Orleans — er, Tampa Bay and New Orleans — meet at the Superdome for the first of two times this season. For the quarterbacks, this will be their initial matchup as N.F.C. South rivals, and only the sixth over all during their storied careers.

Packers at 49ers, Thursday, Nov. 5: Last we saw Green Bay’s defense, San Francisco was running through, around and over it, for 285 yards and four touchdowns in an N.F.C. championship game rout. The Packers have made only cosmetic changes this off-season — seeming to prefer moves that would minimize Aaron Rodgers’s importance — while the 49ers have restocked on both sides of the ball. Which team’s approach proves smarter won’t be determined until season’s end, but each will get an opportunity at Levi’s Stadium on Nov. 5.

Bengals at Dolphins, Dec. 6: Barring anything unforeseen, Joe Burrow, the No. 1 overall pick in this year’s draft, will start at quarterback for Cincinnati this season — and, the team hopes, the next 15. But how about Miami’s Tua Tagovailoa, who, had he stayed healthy, might have been drafted first instead of Burrow? With Ryan Fitzpatrick aboard, the Dolphins can ease Tagovailoa in, but at some point they will unbridle him, and by early December that should happen.

Patriots at Rams, Thursday, Dec. 10: An excellent litmus test for the contestants of Super Bowl LIII. Not even two years later, the Rams have faded from the league’s elite, just as they’re about to move into glimmering SoFi Stadium, while New England, after an exodus claimed Tom Brady and several defensive starters, will be adapting to a new starting quarterback, Jarrett Stidham … while being coached, as ever, by Bill Belichick.

Eagles at Cowboys, Dec. 27: The Eagles’ mission, should they choose to accept it, will be to contain quarterback Dak Prescott, running back Ezekiel Elliott and Dallas’s daunting fleet of receivers — Amari Cooper, Michael Gallup and the rookie CeeDee Lamb, who, somehow, fell in the draft to the Cowboys at No. 17. How Philadelphia, which revamped its secondary by trading for Darius Slay and signing Nickell Robey-Coleman and Will Parks, fares could determine the N.F.C. East championship.

49ers at Seahawks, Nov. 1: As we were reminded last season, the N.F.L. is far more interesting when Seattle and San Francisco are both good. They rekindled one of the league’s best rivalries in an N.F.C. West race, decided by inches on the penultimate play of the final game. As long as Russell Wilson is leading the Seahawks — and the 49ers’ Nick Bosa, Arik Armstead and Dee Ford are chasing him — every matchup has the potential for chaos.

Browns at Steelers, Oct. 18: For the first time since ripping Mason Rudolph’s helmet off last November and bashing him on the head with it, Cleveland defensive end Myles Garrett will visit Pittsburgh, where — just a hunch — the locals probably haven’t forgotten what happened. A certain urgency is confronting each team this season — Cleveland’s latest coaching change, to Kevin Stefanski, surely has to be the one that boosts the Browns; Ben Roethlisberger, coming off elbow surgery at 38, can’t quarterback the Steelers forever — and Garrett’s return will add more sizzle to a meeting that is rarely tame.