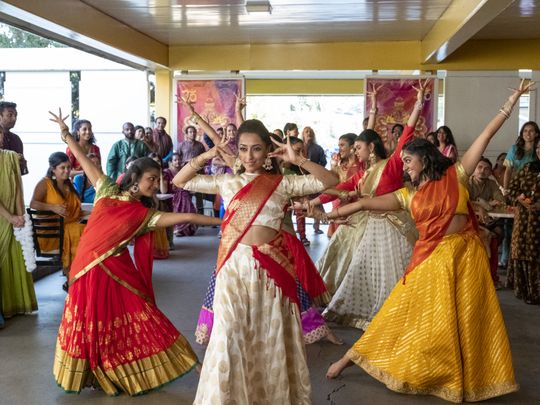 Mindy Kaling isn’t trying to tell everyone’s story — she’s had to break a lot of boundaries just to tell her own.

Her new Netflix series, ‘Never Have I Ever,’ out now, looks to break another, offering a story absent from American screens: a coming-of-age comedy about the life of a modern-day first-generation Indian American teenage girl.

“For all of us in the writers’ room, particularly those of us who were the children of immigrants,” who composed most of her staff, “it was about sharing those stories of feeling ‘other,’” said Kaling, who is also a first-generation Indian American. “One of the best parts about being in that room was realising that they felt so many of the same things I did, and it was such a relief. It made me feel like, ‘OK, I’m, like, normal.’”

For Kaling, 40, who has spent most of her career writing characters she can also play, the series is something of a new frontier. A longtime comedy writer, she got her break in her mid-20s as a writer for the American version of ‘The Office,’ in which she also starred as the sassy, fearless Kelly Kapoor.

After about eight seasons, she parlayed that success into the ‘The Mindy Project,’ which she created, wrote and again starred in; the show’s lead character was loosely inspired by her mother. (Kaling has also written two humorous autobiographical books.)

More recently, she cocreated a 10-part adaptation of the 1994 feature ‘Four Weddings and a Funeral’ for Hulu, updated with a more diverse cast. Not all of her screen projects have been romantic comedies, but most have at least contained strong romcom elements. So when Netflix approached her about doing something totally different, she jumped at the chance.

“They had read my books and really loved the parts where I talk about being an adolescent and a teenager,” said Kaling, who created and wrote the series with Lang Fisher, a ‘Mindy Project’ alumna. “Because there isn’t a show like this,” she said, “they thought it would be a great fit for them.”

In casting the series, Kaling said, she grew tired of seeing the same “28-year-old, gorgeous Bollywood stars” audition, particularly for the lead role of Devi, an overachieving high school sophomore, partly based on Kaling, with a short fuse that gets her into difficult situations.

She decided to post an open call on social media, seeking three “Desi ladies” to play Devi and Devi’s mother and cousin. (“Desi” is used among the South Asian diaspora to refer to the region.)

In a recent phone interview, Kaling talked about that casting process, about venturing beyond the romantic-comedy genre, and about trying to adapt her experiences into a show about teenagers today. These are edited excerpts from the conversation.

How much of the show is autobiographical? And how did you update it for Indian American teenage girls today?

Netflix was open to us doing it as something set in the ’80s or the ’90s, but I’d seen that done so well with shows like ‘Fresh Off the Boat’ and ‘Everybody Hates Chris.’ I really wanted to speak to kids now. I also thought it would be a really great way to hire a lot of young Indian American writers who can remember their teenage years more recently than me and fill our staff with them. I was also really greedy with the young actresses on the show. Maitreyi was a resource in herself. When she would do table reads, we would change the vernacular so it made sense for someone her age.

What stood out about Maitreyi among the thousands of applicants to your open casting call?

With Maitreyi, there was something about her. She later said that she was very intimidated to fly to LA to come audition, but when she spoke to us, she had natural confidence. I really loved that she was Tamil, which I am also. Also, I think about colourism a lot, and I liked that she wasn’t like this red-haired, green-eyed, pale-skinned Indian girl. I liked that she looked a little bit more like someone that would be in my family. She also was just naturally funny.

You’ve been at the forefront of South Asian representation for a long time, but there’s been some criticism that some of your early roles were stereotypical. What was that like for you? Do you feel you’ve grown from it?

Denzel Washington once said something that always stuck with me. Someone asked him why he doesn’t play villains more often, and he said something like: There’s just so few of us, and I mean so much to my community that I feel like I can’t do that in this lifetime.

That really resonated with me, because I thought that was really smart of him in a way that I have not been smart. I come from comedy, where the funniest characters are the flawed ones, like Michael Scott [Steve Carell’s character on ‘The Office’], and my training was for writing those characters.

The problem is, they’re all white. So when you try to play that character and you’re Indian, and you’re the only Indian character people have, it’s within their right to say: ‘How dare you do that to us? We have no representation.’

The character has bad priorities, is saying off-colour things, is selfish and all these things that I’m not personally, but I find really fun to play. That’s something that I have struggled with, because I just want to have the most enjoyable artistic experience. But that doesn’t necessarily always fall in place with my role as a role model.

Do you still face that kind of criticism?

I remember when the teaser trailer came out and Devi’s praying, and she says, ‘Hey, gods, it’s me Devi Vishwakumar’ and there was a comment on Twitter saying, “Oh, great that is totally not how Hindu girls talk.” And I remember being incensed because when my mom used to make us pray before we took the SATs, or before we got on a plane, and I didn’t know all the different names of the Gods because no one had taught me, I was just like: ‘Hey Gods. Please let me do well on my SAT. I’ve been working really hard and it means a lot to my parents.’

What I realised is that because we don’t have a lot of different shows depicting Hindu teenagers praying [laughs], it offends people when it’s not exactly the way that it was for them. I’m still trying to figure out a way to accept that criticism. Those people who watch the show, particularly young Indian American women, are the people that I want to like it the most. And they’re the ones that are going to be the toughest on me. So it’s one of the biggest things I care about now as an artist.

For you as a creator then, what is the next frontier for South Asian representation?

From watching several hundred of the auditions, I saw the hunger that I kind of hoped that was there. If this show does well, hopefully, and it just feels more normal to see Indian people on things, then there will hopefully be more shows greenlit.

To me it would be great if there is more LGBTQ content for Indian people. I feel like that is almost never talked about. In some Indian communities there’s still a stigma attached to coming out. I’d love to tell a story about a young queer woman. And if I don’t see it, maybe I have to create something.

I’m curious about the title. What was the thinking behind ‘Never Have I Ever’?

[Laughs.] I’m so bad at naming things, which is why my show was called ‘The Mindy Project.’ This is actually something Lang, my co-creator, came up with. This is a character whose ego is so caught up in the things she hasn’t done yet, hasn’t been exposed to yet. And that felt really kind of natural to her personality.

Maybe it’s a bad name. I have no idea, it probably sucks.

‘Never Have I Ever’ is now streaming on Netflix.

— PHOTO MOVED IN ADVANCE AND NOT FOR USE – ONLINE OR IN PRINT – BEFORE SEPT. 3, 2017. — Mindy Kaling in Los Angeles, Aug. 26, 2017. The writer and actress talks about the growing diversity in Hollywood and transitioning from the sixth and final season of “The Mindy Project” to her new midseason NBC series “Champions.” (Emily Berl/The New York Times)
Image Credit: NYT

PHOTO MOVED IN ADVANCE AND NOT FOR USE – ONLINE OR IN PRINT – BEFORE FEB. 28, 2016. — Mindy Kaling in Los Angeles, Jan. 31, 2016. Hollywood players shared their personal experiences of not feeling seen, heard or accepted, and how they pushed forward in an industry where the deck often seems stacked against anyone who is not a straight white man. (Brinson+Banks/The New York Times) — PART OF A COLLECTION OF PORTRAITS FOR USE AS DESIRED IN YEAREND STORIES AND RECAPS OF 2016 —
Image Credit: NYT