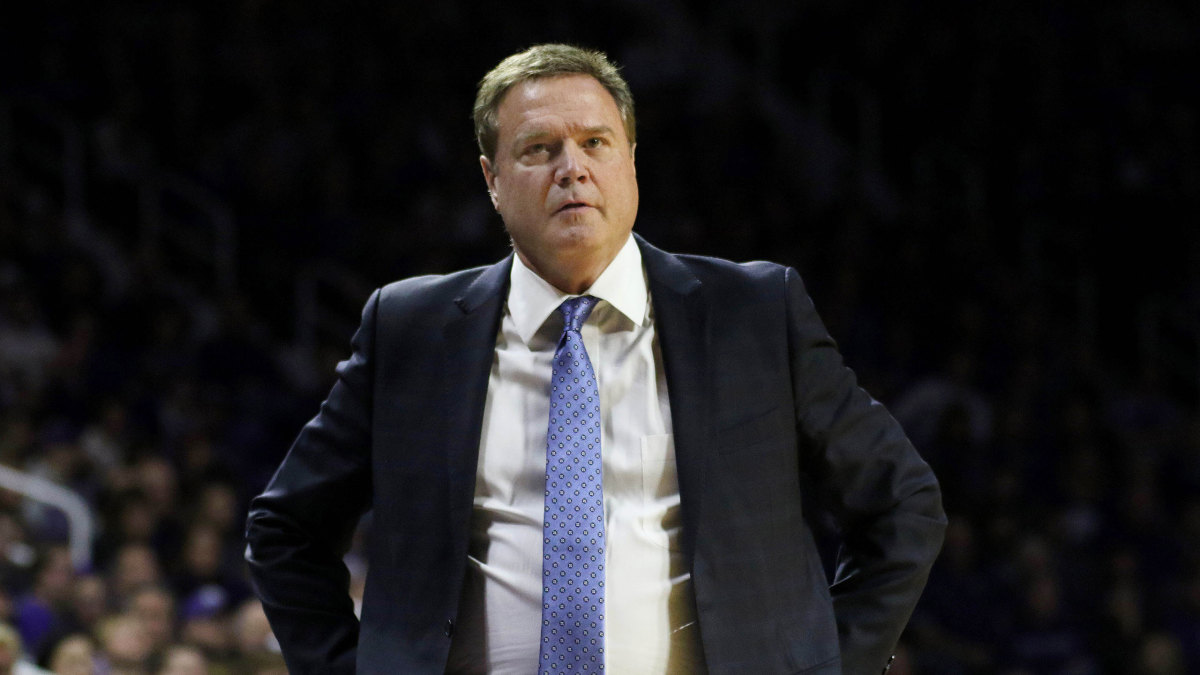 Reed described him thusly to NCAA investigators: “He’s a parasite taking advantage of kids and riding their coattails to be a jock sniffer to power coaches and power players in the industry. … “ Reed said he asked the Kansas ticket manager, Scott Hahn, about Gassnola and was told, “Just Google him, he’s a scum bag.” Google don’t lie: Reed found out Gassnola had been a runner for agent Andy Miller, had his AAU team suspended by the NCAA and had a criminal record.

Sean Lester is the deputy athletic director at Kansas, essentially the No. 2 man in the department. According to NCAA Enforcement, Lester was sufficiently concerned about Gassnola’s presence around the Jayhawks that he asked the head of Adidas North America, Mark King, outside a meeting about Gassnola’s role with the company. King told Lester that Gassnola is a consultant, and that was that.

Sheahon Zenger was the athletic director at Kansas from 2011-18. He saw Gassnola in the hallways of the school’s athletic offices, and interacted with him at coach Bill Self’s Hall of Fame induction in early September 2017—where Adidas paid $250,000 to throw a party in celebration of both Self and former Adidas client Tracy McGrady’s induction. Zenger said Lester shared his concerns about Gassnola with him, but Adidas “assured (Lester) he was on the up-and-up.”

Those are the NCAA Enforcement accounts of three Kansas senior athletic administrators regarding the bagman who came home to roost in Lawrence. They didn’t like T.J. Gassnola, didn’t trust him—and didn’t do a thing to curtail his access to Self’s program. Those accounts were all part of the NCAA’s 92-page response to the school, the final follow-up phase from its 2019 Notice of Allegations.

It is a one-sided document filed in response to Kansas’s own one-sided document, the latter of which refutes almost everything the NCAA alleges. Among the disagreements was how vigilant the school could and should have been regarding Gassnola, who became a star cooperating witness at one of the federal college basketball corruption trials and testified to paying multiple former players, including multiple Jayhawks.

But if you want to know why Kansas is facing a Level One charge for lack of institutional control and failure to monitor its men’s basketball program, the hands-off approach to Gassnola (and other Adidas reps) is your answer. It is one of five Level One allegations against the school, making this the most aggressive NOA to date from the NCAA in the wake of the federal investigation of the sport. (Auburn, which won’t publicly confirm or deny receipt of its NOA, might be sitting on a doozy as well. And we don’t yet know what might await LSU or Arizona.)

The fundamental flashpoint of debate between the NCAA and Kansas revolves around Gassnola and others on the Adidas payroll. The NCAA says Gassnola, James Gatto, Merl Code and David Cutler were representatives of Kansas’s athletics interest, and thus were boosters, working to put players in Jayhawks uniforms. The school says they weren’t boosters, just Adidas employees trying to help the company and not any particular school, and thus Kansas cannot be held accountable for the raft of rules they broke on its behalf.

It will be up to the NCAA Committee on Infractions (or possibly the new Independent Accountability Resolution Process) to rule on that. But if you can navigate through the turgid waters of NCAA parlance and definitions, the crux of the matter is this: Kansas, which once famously proclaimed its victimhood at the hands of Adidas, welcomed Gassnola into its orbit and never lifted a finger to monitor him—despite his “scum bag” status in the eyes of the administration.

Why? Because Self obviously wanted him involved. And nobody at Kansas—including his titular superiors—was going to question a national champion coach who owned the Big 12. Nobody in the Kansas administration questioned Self about Gassnola’s association with the program.

What Bill Self wanted, Bill Self got. That includes tens of millions of dollars during his Kansas tenure to date. And now it includes Level One NCAA allegations that could result in massive penalties for both the school and the coach.

Self has taken the position that Gassnola was basically just part of the AAU/sneaker circuit scenery. Someone who is around, and who his program dealt with, but not someone it relied on for help in recruiting. That’s despite the text exchanges between the two that were revealed in court and are part of the NCAA’s NOA, in which Gassnola says helping Self is his top priority. (That’s after Self texts Gassnola that they “just got to get some real guys.”)

If Bill Self had spent the first 15 years of the 21st century coaching in Turkmenistan and then suddenly arrived in college basketball, he might not have any idea what Gassnola’s reputation and track record were within the sport. But that wasn’t Self’s career path. He was one of the most accomplished recruiters of high-end talent in the sport, which meant immersion in the grassroots culture that elevated Gassnola to a well-compensated fixture.

Yet there he was with Kansas at the 2015 Maui Invitational—prompting Reed to wonder why an Adidas grassroots guy would be in attendance at a marquee tournament in Hawaii. And there he was (along with Gatto) at the same on-campus hotel as prospective recruit Billy Preston when Preston made his official visit.

Kansas will tell you that Gassnola and Gatto booked their own rooms at the Oread Hotel and were not part of the institution’s room block. And they will tell you they could not prevent Gassnola from offering money to Preston and his mother in his hotel room during that visit. But the NCAA says assistant coach Kurtis Townsend saw Gassnola with Preston and his mother at the hotel after Kansas’s Late Night season-opening event, and did nothing with that information.

Why would he? To the Jayhawks staff, Gassnola was a known friend of the program, not a rogue threat who was victimizing Kansas basketball. He was helping recruiting.

The school administrators who were uneasy about Gassnola either didn’t have the juice to challenge Self or, just as likely, fully suspected what was up and accepted it as a risky byproduct of doing business. The NCAA NOA quotes Reed himself, from a compliance seminar, acknowledging exactly that:

“(T)hese shoe companies are employing less than desirable individuals in their grass roots areas and we are placed in an impossible situation because we cannot dictate who the shoe companies hire or send to our universities. And in that same comment, I said this Adidas parades T.J. Gassnola to our campus and this guy has the same rap sheet as Lucky Luciano.”

But poor victimized Kansas, the flagship program that Adidas tirelessly catered to, had no power to request a different Adidas hanger-on.

Fact is, if you win recruiting battles for five-star talent, as Kansas routinely has, you deal with Gassnolas. Hell, you want and need the Gassnolas.

Then, when everything blows up, everyone has to play their roles. Administrators must proclaim their profound shock that payments to players and their families could occur.

Even after the entire underground economy was exposed by the FBI and Southern District of New York in late September 2017, Kansas didn’t exactly rush to disassociate from Gassnola. Gatto was arrested, so kicking him to the curb (and ultimately trying to gouge money out of him in court) was an easy call. But the school argued that it still had no reason to know Gassnola was trouble even after the Adidas schemes were revealed.

And yet … when Preston wrecked a very nice car on campus in November and the school was forced to deal with that sudden potential scandal, Reed closed his compliance interview with Preston’s mother by asking if she knew T.J. Gassnola.

Turns out she did—she received an alleged $89,000 from Gassnola in various payments. And that’s why Preston never played at Kansas.

Reed’s deeply held suspicions turned out to be correct. But neither the school’s compliance director nor any other Kansas administrator ever did a thing to stop the bagman from coming to roost in Lawrence, with the tacit welcome of Bill Self. And that’s why the Jayhawks are bitterly fighting for their future postseason lives with the NCAA.