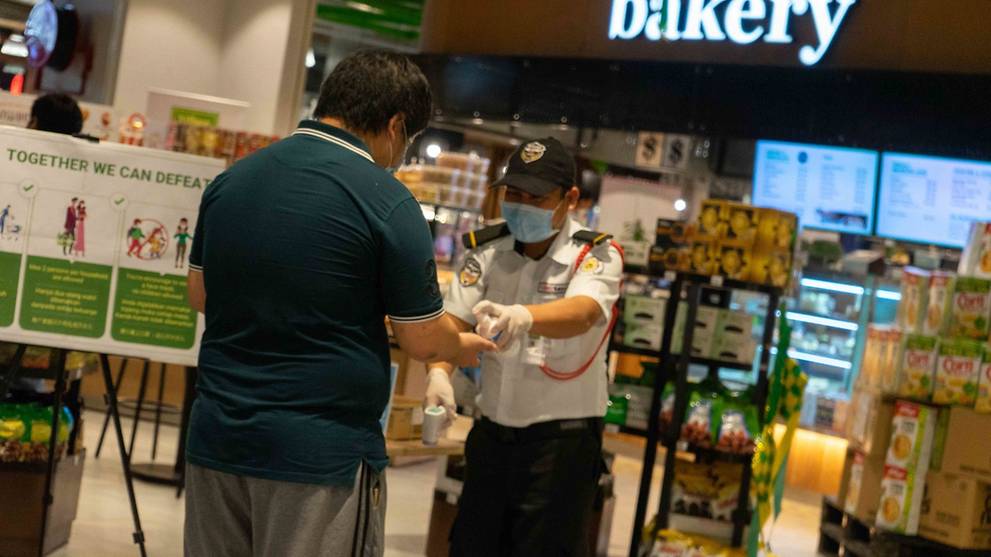 JOHOR BAHRU: Many malls and eateries in Johor Bahru have reopened while implementing new health protocols, as the state began to ease movement restrictions aimed at curbing COVID-19 this week.

On Monday (May 4), the Johor state government announced that it would heed the federal government’s call to implement a conditional movement control order (MCO), with economic sectors being opened up carefully.

This has encouraged retailers to kickstart operations. For some of them, this was the first time they opened for business in more than a month, after being forced to close when Malaysia first imposed the MCO on Mar 18.

Businesses have been careful in adhering to the health protocols, in what some have called the new normal as Malaysia moves into the next phase of keeping the pandemic at bay.

Various megamalls around Johor Bahru announced that they would open their doors after the chief minister’s announcement.

In response to queries from CNA, the mall highlighted that it has implemented new measures such as closing its west entrance “for better crowd control”.

“To prioritise the well being of our community, all visitors and employees will be subject to temperature checks at checkpoints located at mall entrances as well as car park lobbies before entering the mall,” it said in a statement.

Meanwhile, Toppen Shopping Centre, one of the city’s newest shopping centres, said it reopened its doors from Wednesday. The operations hours are from 10am to 8pm daily.

In a statement, Toppen Shopping Centre, which also houses IKEA Tebrau, has stressed that its shoppers will be required to adhere to strict social distancing measures.

These measures will apply especially when customers are entering the mall and when waiting for lifts.

Over at JB City Square, a mall located close to Johor’s land immigration checkpoint at the Woodlands Causeway, food and beverage outlets, pharmacies and supermarkets shops have started to operate.

However, City Square maintained that certain retail categories such as its cinema, karaoke centre, massage outlets and beauty salons will remain closed. This is in line with rules as announced by the federal government.

During his labour day speech on May 1, Prime Minister Muhyiddin Yassin outlined that such business activities will remain closed as they involve mass gatherings and thus, social distancing will be difficult to enforce.

Although movement restrictions have been eased overall, the federal government has maintained strict border restrictions and stressed that no foreigners are allowed to enter the country.

This means that Singaporean visitors who traditionally head to Johor Bahru to shop and dine are not allowed to do so, therefore affecting retail businesses especially those selling food and beverage.

One such outlet that is popular among Singaporean visitors is Hiap Joo Bakery & Biscuit Factory, famous for its freshly baked banana cake.

The bakery’s manager, Mr Lim Toh Shian, told CNA that the bakery remains closed although it can legally operate from May 4.

Mr Lim explained that Singaporeans accounted for half of its total customer base. It would be hard to cover the cost of opening the shop and baking the bread and buns without these visitors, he said

“We might open on May 12, when the MCO ends officially,” said Mr Lim, who added that the bakery would only start off by producing in small quantities.

Over at Anjung Senibong – a popular seafood restaurant in Johor Bahru that is popular with Singaporeans – the restaurant manager who only wanted to be known only as Mr Zainal told CNA that the restaurant was open for dine-in from Monday, with social distancing measures in place.

Mr Zainal added that the seafood on offer is less than usual as there were no visitors from Singapore. Also, many locals ate less seafood during the ongoing Ramadan fasting month, he noted.

Some restaurants that typically offer set meals for Muslim families to break their fast have also reopened. For instance, Cinta Terrace Restaurant at Johor Bahru’s Pulai Springs Resort, which typically offers set meals of curry fish head, shellout and western food, said it has opened its doors for dine-in from Thursday.

But to ensure social distancing, the restaurant has decreased the maximum number of patrons allowed from the usual 150 to a maximum of 50.

Similarly, Wan Li Chinese Restaurant, at the Renaissance Johor Bahru Hotel, has said that it will “adhere to social distancing and hygiene standard operating procedures” as outlined by the state government.

The restaurant, which reopened on Thursday, has re-arranged furniture so that patrons are seated further away from each other.

The Johor state government has conducted enforcement operations to ensure that businesses are operating in accordance with health protocols.

On Tuesday, Johor’s state housing and local government committee chairman Ayub Jamil said that the government has issued closure notices to 230 premises for non-compliance during the MCO period.

Mr Ayub added that the inspections were carried out on entertainment centres, public markets, factories and construction sites to ensure that the businesses complied with the MCO directive.

During the MCO period from Mar 18 to May 3, non-essential businesses like entertainment centres and megamalls were closed. Restaurant outlets were only open for takeout.

He said further checks will also be done during the conditional MCO until May 12 to ensure that premises, including factories, comply with social distancing and other health protocols.

READ: Commentary: Malaysia is beating all these brutal COVID-19 expectations

Moreover, Johor’s health and environment committee chairman R. Vidyanathan has stressed that all retail outlets must adhere to health protocols during the conditional MCO.

In a statement on Wednesday, Mr Vidyanathan said: “This includes ensuring the cleanliness of the premise, customer management including ensuring social distancing, contactless payment transactions, as well as health screening and the use of hand sanitisers. Retailers who do not comply with the SOP could face prosecution under the law.”

He added that the conditional MCO was “not a ticket for people to move freely” but rather a period for Johor residents to adjust and adapt to “a new normal”.