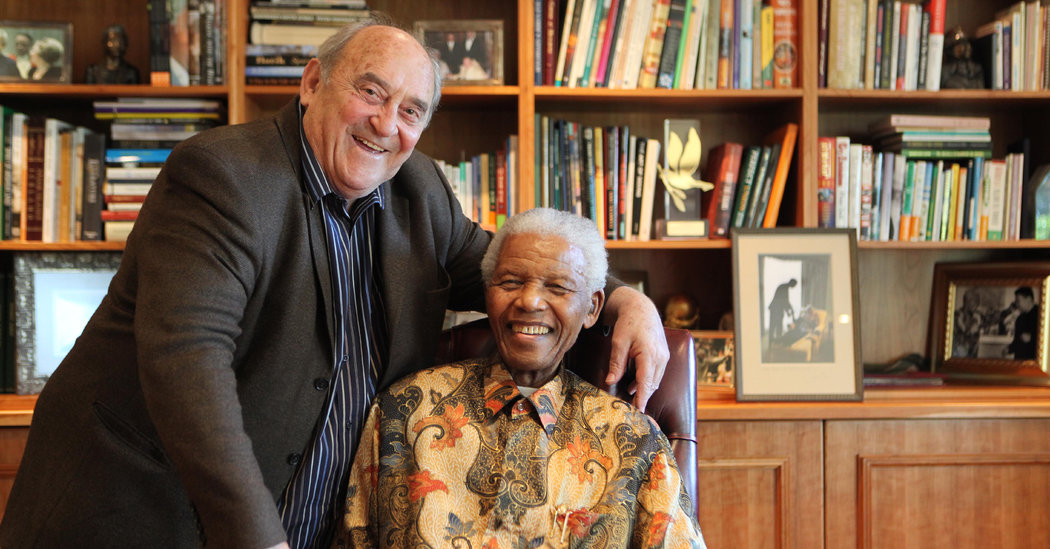 Denis Goldberg, one of two surviving political activists convicted in the so-called Rivonia Trial, which put Nelson Mandela and seven others in prison for many years and proved a turning-point in South Africa’s long struggle against apartheid, died on April 29 in Cape Town. He was 87.

His family, in confirming the death, said he had been treated for lung cancer.

Mr. Goldberg’s career, first in the armed resistance movement and later in the post-apartheid era, encapsulated much of his country’s modern history, from the racial nuances of the struggle against white minority rule to the reluctant acknowledgment of — and disillusion with — the corruption that became a byword in early 21st-century South Africa.

At the trial, which lasted from 1963 to 1964, many of those accused of sabotage were expecting the death sentence. Indeed, in a celebrated address from the dock, Mr. Mandela said his ideal of a democratic and free South Africa was, “if needs be, an ideal for which I am prepared to die.”

When Judge Quartus de Wet pronounced life sentences on eight defendants, Mr. Goldberg’s mother, Annie Goldberg, who was in the public gallery, did not hear what he said.

In all, 11 people faced charges as the trial approached. Of those, the state withdrew its accusations against one potential defendant, Robert Hepple, and he was released. Two others — Lionel Bernstein, who was known as Rusty, and James Kantor — were acquitted. All three fled to London.

At 31 Mr. Goldberg was the youngest of those convicted and the only white person among them.

The hearings came at a crucial juncture in South African history. The authorities there had increasingly resorted to force in suppressing opposition to apartheid, the white rulers’ draconian system of racial separation, and their adversaries had turned to armed struggle in response. The trial was intended to crush and silence Mr. Mandela and his followers.

But the prisoners turned the occasion into a global indictment of apartheid, particularly with Mr. Mandela’s speech from the dock.

“It was the most important trial in South Africa’s history,” Nick Stadlen, a former High Court judge in Britain who made a documentary film about the trial in 2017 that featured Mr. Goldberg and others, wrote in The Guardian after Mr. Goldberg’s death.

The origins of the trial date to July 1963, when the South African security forces raided Liliesleaf Farm, a hideout in the Rivonia district in the northern suburbs of Johannesburg. Members of mKhonto we Sizwe (Spear of the Nation), the clandestine military wing of the African National Congress — both of them outlawed organizations — were meeting there when the police stormed in. At the time, Mr. Goldberg, a member of the banned South African Communist Party, had been a technical officer in the military unit, cloaking his sabotage activities behind a day job in the construction of a power station in Cape Town.

Before the trial, Mr. Goldberg was interrogated and threatened in a police effort to secure confessions or persuade their captives to testify against their fellow detainees. Under harsh laws permitting detention without trial for 90 days, Mr. Goldberg’s wife, Esmé Goldberg, was also held for many days.

Even Mr. Goldberg’s sentencing did not escape the strictures of apartheid. While Mr. Mandela and six defendants were sent to serve their sentences on Robben Island, off Cape Town, Mr. Goldberg was ordered to the Central Prison in Pretoria, the administrative capital.

sprinter Oscar Pistorius served part of a sentence for killing his girlfriend, Reeva Steenkamp. It is also the setting for a 2020 movie “Escape from Pretoria,” starring Daniel Ratcliffe, which chronicles a real-life breakout by three prisoners in 1979. Mr. Goldberg, who helped facilitate the escape but did not participate in it, was played in the film by Ian Hart, an English actor.

Mr. Goldberg remained in prison until 1985, serving 22 years, during which he was allowed visits by his wife amounting to only a few hours in the entire period of his incarceration. The few letters he was allowed to send were intercepted or censored. He studied law while behind bars.

Mr. Mandela was freed in 1990 as part of the maneuvering that led to South Africa’s first democratic, all-race election in 1994.

Early in his sentence Mr. Goldberg tended to the terminally ill fellow prisoner Abram Fischer, who was known as Bram, a lawyer of Afrikaner descent who had led the Rivonia defendants’ defense and who had himself been tried and jailed in 1966 on charges of conspiring to overthrow the government and furthering the aims of communism. He was found to have cancer in 1974.

In the final stages of Mr. Fischer’s incarceration, the prison authorities allowed Mr. Goldberg to spend nights in his cell to nurse him, as Mr. Goldberg recounted in his 2016 memoir, “A Life for Freedom.” Mr. Fischer was allowed to be placed under house arrest at his brother’s home only in 1975, a few weeks before his death.

Denis Theodore Goldberg was born in Cape Town on April 11, 1933, to English-born Jewish parents, Sam and Annie (Fineberg) Goldberg. His mother was a seamstress, his father a truck driver. The couple’s forebears were active Communists who had fled Lithuania to escape Russian pogroms, and their son inherited their ideology. After Hitler invaded Poland in 1939, he recalled, his teachers and fellow schoolmates in South Africa taunted him for being Jewish.

Mr. Goldberg grew up in a blue-collar, mixed-race neighborhood of Cape Town, but in his teens South Africa’s National Party won elections in 1948 and began erecting the system known as apartheid.

In his early 20s he joined several left-wing and anti-apartheid movements, including the South African Communist Party. During this period he met Esmé Bodenstein, a fellow member of a multiracial group called the Modern Youth Society. They married in 1954 and had two children, Hilary and David. Ms. Goldberg, a physiotherapist, died in 2000, and their daughter died at 47 in 2002, the same year Mr. Goldberg married Edelgard Nkobi. Ms. Nkobi died in 2006. He is survived by his son.

At the University of Cape Town, Mr. Goldberg studied civil engineering and graduated in 1955. He was first detained, along with his mother, during the state of emergency following the Sharpeville massacre of March 1960, when police opened fire on protesters and killed 69 of them.

He joined the mKhonto we Sizwe military unit in 1961 with the job of building weapons and explosives to sabotage electric power pylons and other targets. At the time of his arrest in 1963 he had been expecting to be spirited out of the country for training by the East Bloc countries that supported Mr. Mandela’s armed struggle.

Mr. Goldberg was granted release from prison in 1985 under an agreement with the white authorities that he renounce violence. “I reckoned I had been in prison long enough,” he wrote in his memoir. His daughter, Hilary, who was living at the time in Israel, had campaigned for his release.

As soon as he was out of prison he left South Africa for London, where he worked for the African National Congress and raised funds for charities. He returned to live in South Africa only in 2002 and worked there as a ministerial aide. He became a fierce critic of corruption among the political elite that had grown around President Jacob Zuma, who resigned in 2018.

Mr. Goldberg devoted much of his final years to promoting an arts and educational center called the Denis Goldberg House of Hope in the town of Hout Bay near Cape Town. The center reflected his conviction, he told The Guardian in 2017, that “people matter.”

“I feel the whole point of being in politics is about people,” he said. “For me it’s not about power.”