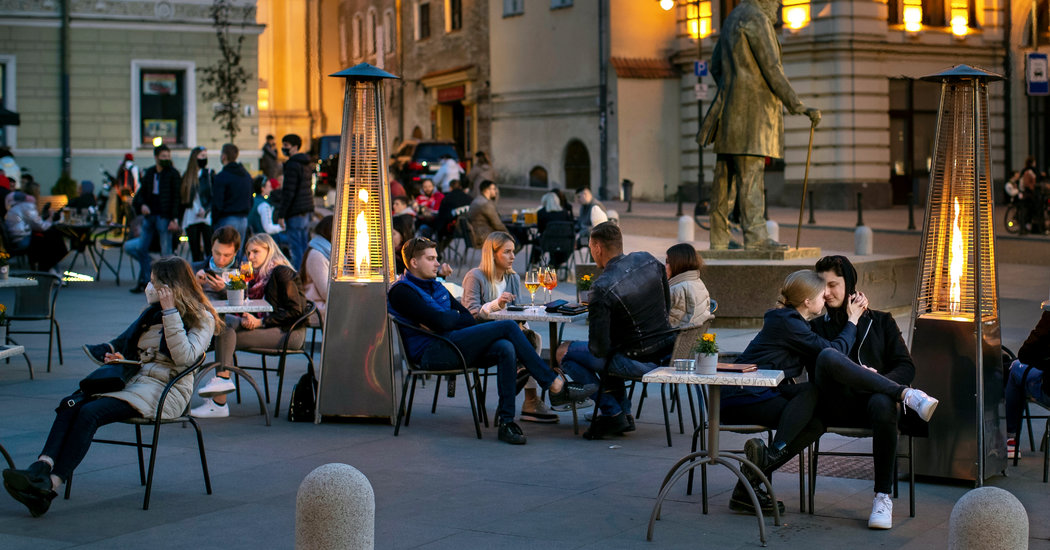 A father and son in Georgia are charged with murder. The Justice Department drops charges against a former Trump aide. But let’s start with the high-stakes global experiment on the pandemic that’s about to begin.

The ‘trial and error’ phase

The world is entering a very risky period with the coronavirus — and many health experts and ordinary people are nervous.

The reopening has begun: Parts of Pennsylvania and North Carolina are relaxing their stay-at-home orders today. France will begin reopening next week. Similar moves are happening elsewhere.

Yet there are still huge unanswered questions about the virus. How many people have it, and, by extension, how deadly is it? How often do children spread it? Are people who’ve had it immune from getting it again?

In the United States, there are also unmet benchmarks — which epidemiologists say should be met before reopening. The U.S. is testing fewer people per capita than other countries, and the outbreak is still growing in many states that are starting to reopen.

So how bad will reopening turn out to be?

The most likely scenario, many experts believe, is that the U.S. will spark new outbreaks by ending lockdowns without a more solid plan. That, in turn, could have tragic consequences, with thousands of avoidable deaths.

Max has a useful — if chilling — way of thinking about the new phase: It’s the “trial-and-error” phase, in which different countries take different approaches and the world witnesses the results.

Lithuania, betting that outdoor activity is safer, is blocking off streets for outdoor restaurant service. California is encouraging curbside pickup instead. Denmark is opening schools to younger children (who may be less contagious), while Germany is opening for older children (who may do better following instructions).

“Few want to acknowledge it, but these first phases of reopening are big experiments meant to test the unknowns,” Max told me. “It’s a dangerous game, and it’s worth being cleareyed about the risks we’re all taking on.”

1. Arrests in a jogger’s killing

Prosecutors in Georgia late yesterday charged a white father and son with murder in the February shooting death of Ahmaud Arbery, an unarmed black man who was jogging. The case became a source of national outrage — from Joe Biden, LeBron James and others — after a video of the shooting emerged this week.

2. The Flynn case fits a pattern

Flynn, President Trump’s first national security adviser, had pleaded guilty to lying to the F.B.I. about his contacts with a Russian diplomat. The Justice Department said it dropped the matter because those lies were not “materially” relevant to the Russia investigation.

One sign of Americans’ anxiety about the virus: Even in some states that have started to reopen, many people have said, in effect, no thanks.

In Alaska, Georgia, Oklahoma and South Carolina — all states that have removed some restrictions — there has been little increase in the number of small businesses that are open or the amount of time people spend at work, according to an analysis by economists. Consumer spending has risen, but not by much more than in states that remain shut down.

Related: “The reopening weekend was a disaster,” the C.E.O. of one Georgia business — an axe-throwing venue in Atlanta — told the publication Bisnow. “We had two customers all weekend.”

BACK STORY: A ‘portrait of devastation’

The monthly jobs reports comes out this morning, and it will be unlike any report before it. Forecasters expect a loss of more than 20 million jobs and an unemployment rate above 15 percent — both record highs over the last 70 years.

Neil Irwin is one of The Times’s economic experts, having covered the subject for almost two decades. He writes:

Many people mark time with birthdays, or the turning of the seasons. For me, it has been the monthly jobs report. For the last 13 years, at 8:30 a.m. Eastern on either the first or second Friday of the month, I’ve awaited the latest numbers.

Most of the time, it’s fun, if you’re into that sort of thing. I’ve participated in the jobs day conversation while on my honeymoon (by agreement with my wife, I could tweet about it but not file an article), and from a rooftop pool in Athens (after a long week of reporting on the Greek debt crisis).

There will be nothing fun about Friday’s report. It’s hard to even fathom what we’re going to learn, or what kinds of words can capture the human pain beneath the eye-popping numbers. We should despair for the millions of Americans who are without work, the potentially long-lasting damage to their families and to the nation’s productive potential.

Basketball may be the team sport with the easiest path to restarting, thanks to its relatively small rosters and arena, and three N.B.A. teams — Cleveland, Denver and Portland — will be resuming voluntary workouts today, The Times’s Marc Stein reports.

When the Knicks weren’t bad: Today is the 50th anniversary of the New York Knicks’ first championship — won after Willis Reed shocked fans by playing with a torn thigh muscle. Our columnist Harvey Araton explains how the Knicks were a precursor to the modern N.B.A.

This weekend, watch … ‘something beautiful’

Gilbert Cruz, The Times’s Culture editor, will be offering us regular recommendations for shows and movies you should consider watching on weekends. Today, he suggests two foreign-language films — which “will force to you focus,” as he points out:

“Along with ‘Parasite,’ the surprise best picture winner from South Korea, I’d suggest ‘Portrait of a Lady on Fire,’ a gorgeous (the ocean is so blue!) and swoony French period drama about the romance between a young painter and the woman she is tasked with sketching a portrait of. I find myself full of negative emotions these days and this movie replaced them, ever so briefly, with something beautiful.”

P.S. The words “zoombinos” and “zumigos” — in an article about the popularity of Zoom-esque words in tech start-up names — appeared for the first time in The Times yesterday, as noted by the Twitter bot @NYT_first_said.

Today’s episode of “The Daily” is about a new scourge from Asia that is threatening the United States: giant hornets.

Ian Prasad Philbrick, Lara Takenaga and Sanam Yar contributed to The Morning. You can reach the team at themorning@nytimes.com.