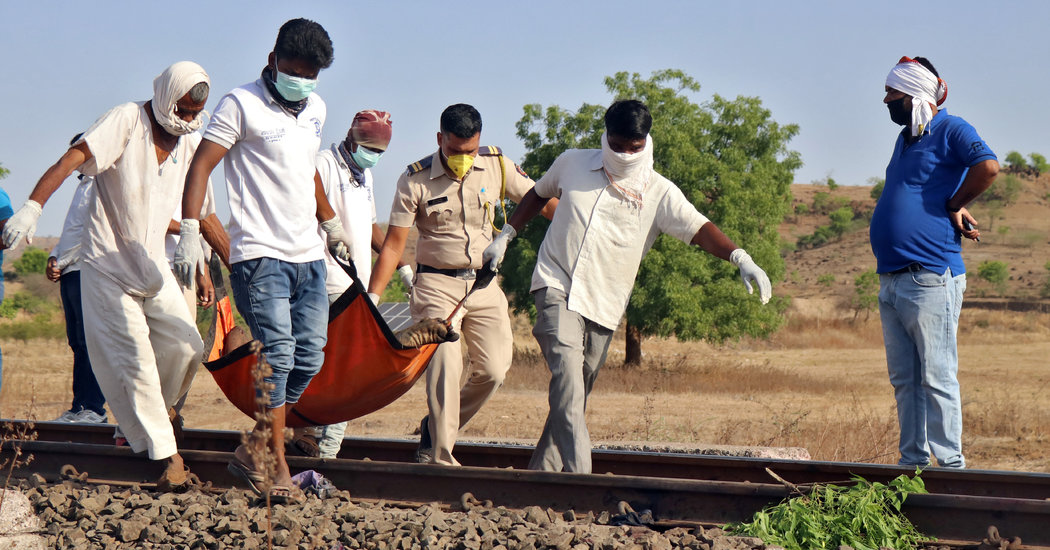 NEW DELHI — Sixteen migrant workers were crushed to death by a freight train in central India on Friday as they were traveling home, the latest casualties connected to India’s coronavirus lockdown and efforts to reopen the economy.

Just the day before, a disaster at a plastics factory that was reopening after a lockdown killed 11 people and sickened hundreds. Officials said that workers at a plant owned by the South Korean industrial giant LG had mishandled a valve on a styrene tank that sent a cloud of deadly vapor floating over the outskirts of Visakhapatnam, a city of several million people, that left people choking to death in the streets.

Many of the country’s struggles before the pandemic — including mass internal migration, unsafe workplaces and industrial disasters — have been amplified by the lockdown and the subsequent move to reopen businesses.

The gas leak wasn’t the only industrial accident as businesses began reopening. On Wednesday, half a dozen workers who had not been given safety gear were hospitalized after inhaling dangerous fumes at a paper mill in Chhattisgarh, in central India, that was trying to restart operations after weeks of inactivity. And on Thursday, several hundred miles to the south, in Tamil Nadu, a boiler exploded at a thermal power plant, badly burning several workers.

“Industry is desperate to open up after the lockdown, and rules are not being followed,” said Shankar Gopalakrishnan, a labor rights activist.

Some of the mishaps may have been exacerbated by the extraordinary exodus of workers from India’s cities. As soon as Prime Minister Narendra Modi imposed the nationwide lockdown in late March, hundreds of thousands of young men who were put out of work streamed back to their home villages, trudging along highways in lines miles long, hoping to survive with their families.

Mr. Modi’s government appeared to be caught off guard by the scale of the displacement. It might have hastened the spread of the coronavirus from cities to rural areas, and it created a shifting hunger crisis of millions of Indians who could no longer earn a living and dispersed to all corners of the country, fearful of relying on the government for help.

The migrants killed on Friday along the railway tracks were among this desperate wave. In recent days, India’s government, which initially blocked migrants from moving state to state, has eased the lockdown rules to allow some to travel. Over all, Mr. Modi’s government has been softening the lockdown, deeply concerned about the economic hit on a country in which many people scrape by on a few dollars a day.

At the same time, several state governments are loosening labor protections in an effort to get industry back on its feet. Labor activists fear that this will make it even more dangerous for workers.

Indian news reports indicated that the victims had recently been laid off from a steel factory, and officials said they had been sleeping on the tracks. (Most passenger train service in India has stopped, but freight trains continue to run).

They were on their way home, several hundred miles away, and apparently were exhausted from walking.

“They thought trains were not moving and it was a safe spot,” said Dnyanoba Banapure, a government official in the area.

“The government went into a lockdown without knowing what it was getting into,” said Gautam Mody, the general secretary of the New Trade Union Initiative, an alliance of labor groups. The working class, Mr. Mody said, is being pushed “over the edge.”

The news of the migrants’ deaths disturbed an Indian public already rattled by the accident at the LG plastics factory. Preliminary investigations indicate that the accident was caused by a leak in a styrene tank that had been neglected for weeks.

Officials said that dangerous pressure had been building in the tank during the lockdown and that factory workers had improperly opened a valve, releasing a huge cloud of toxic vapor.

On Friday, police officers put up more barricades around the factory and were not letting anyone near it. With many of the evacuated villagers being housed in government shelters, the entire area bore a deserted look.

All day Thursday, Indian television channels showed clips of the accident victims. The images of people choking on fumes and lying motionless in the roads conjured up painful memories of the enormous industrial accident in Bhopal, in 1984, when a pesticide plant released toxic gas that killed 4,000 people.

But even if this period under lockdown has caused severe problems, it might have saved more lives than it has taken, and not just from the coronavirus.

The number of fatal car accidents is way down — no surprise, perhaps, given that roads across India were deserted until this week. A recent report found that 140 people died in car accidents nationwide from March 24 to May 3 — an average of 3.4 deaths per day, much lower than the 414 people killed on average each day in 2018.

And with many people confined to their homes, as the government has instructed, to blunt the spread of the coronavirus, figures show that overall death rates have been lower than normal in many large cities, including Mumbai and Ahmedabad.

The general sense in India is that the lockdown’s strictness has helped keep confirmed coronavirus infections relatively low, reported to be around 60,000, for a population of 1.3 billion.