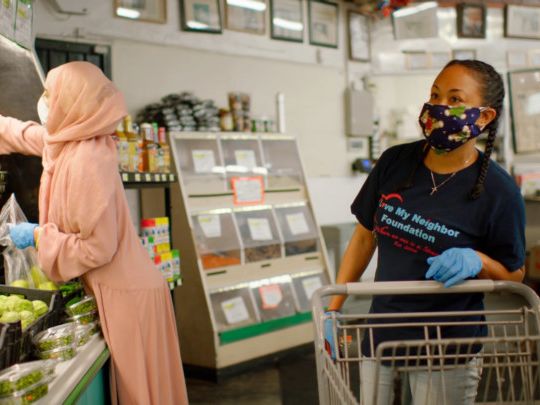 An eight-part docuseries spotlighting Americans on the front lines of the coronavirus crisis is coming to Amazon.

Musician Alicia Keys will appear in the pilot episode to help tell the stories of the project’s first three subjects, including a volunteer caring for the homeless community in Los Angeles. Keys’ motivational song ‘Good Job,’ which was released last month as a response to the pandemic, will also be featured in the show.

“I’m happy to know this series will not only give support to but also put a face on the incredible people,” Keys wrote in a statement. “They are the ones we clap for each night at 7pm in New York. These are the Heroes.”

After experiencing homelessness herself, Athena Hayley has been servicing Angelenos on skid row for five years through her Love My Neighbor Foundation, which has continued to support the homeless community amid the public health emergency.

“Since corona hit, things have changed,” Hayley says in the first episode, which sees her personally deliver meals to people living on the streets of LA. “A lot of companies shut down and don’t serve right now, so we don’t continue to get their leftovers. Sometimes we don’t get enough food at the food bank, so I have to go to the store and buy more food.”

Also starring in the premiere episode are a health care worker from the Bronx and a grocery store owner from New Orleans.

Burnell Cotlon, who built a grocery store in New Orleans after Hurricane Katrina wiped out most local businesses, has dedicated his shop to those affected by the most recent disaster. And Trevor Henry, a husband and father of four, works as a senior inventory specialist at New York’s Hospital for Special Surgery, aiding doctors and nurses as they treat COVID-19 patients.

“We are so proud to celebrate people who are doing so much to transform the lives of people in their communities,” said Jennifer Salke, head of Amazon Studios, in a statement. “This show is inspired by the individuals who give so much to others every day of the year but even more so during this challenging time. They are true role models and we can’t wait to share their stories.”

New episodes of ‘Regular Heroes’ will debut each Friday on Amazon Prime Video. Viewers are also encouraged to enter their own heroes on the series’ website for a chance to be featured in future instalments.