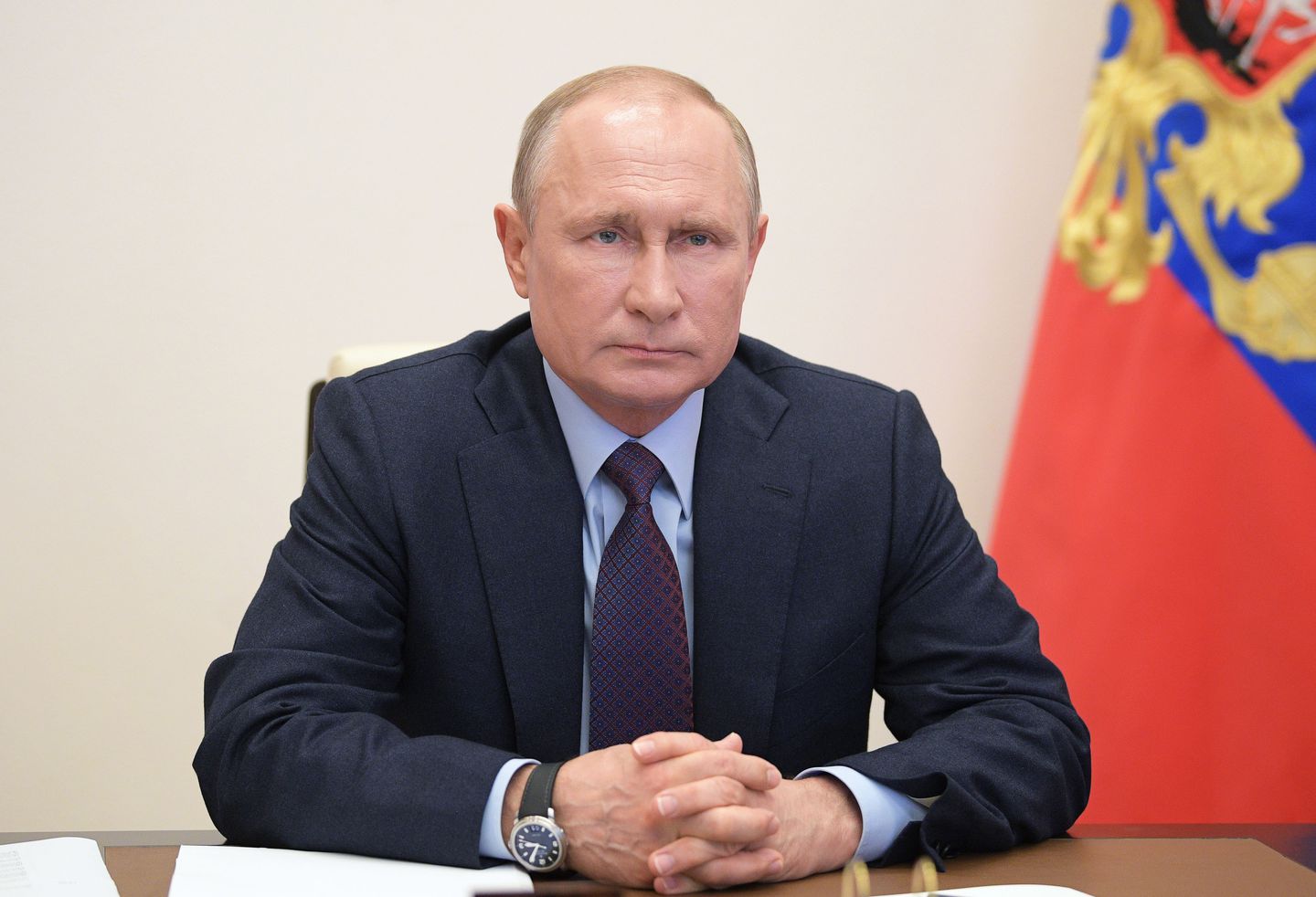 The middle of a pandemic and economic tailspin is not an ideal moment for such veneration. Russia’s covid-19 cases are climbing by more than 10,000 a day, yet the president is strangely absent. He’s holed up in his country retreat, participating in gloomy videoconference calls where rising numbers underscore the scale of the crisis and bureaucrats search vainly for an optimistic note.

Putin has delegated the fight to subordinates, trying to avoid any direct fallout from unpopular isolation measures. Regional leaders, however, were left flat-footed when he tasked them to handle what may become Russia’s biggest crisis since the 1990s chaos following the fall of the Soviet Union.

In the past, Putin had some of his most striking moments when the stakes were high — expanding Russia’s geopolitical clout or facing down world outrage over Russia’s annexation of Crimea from Ukraine in 2014.

But the coronavirus crisis has left Putin looking strangely diminished and has exposed one of his key weaknesses: tending to the dull, nitty-gritty work of improving Russians’ lives, such as boosting a rickety health system in far-flung regions.

For Putin, the timing could not be worse as he plans for a national vote on constitutional changes designed to keep him in power, potentially until 2036.

According to the Kremlin’s spokesman, Dmitry Peskov, Putin smiled when he learned about the plan to install his image in the cathedral, saying that future generations would be eternally grateful for his achievements but that it was too early for the mosaic.

Perhaps that’s because the raw numbers are not going his way at the moment.

Putin’s popularity ratings are falling, and there is no easy recovery, since past highs were associated with growth and buoyant oil prices or his annexation of Crimea. The International Monetary Fund expects Russia’s gross domestic product to shrink by 5.5 percent in 2020, and unemployment could grow from 2.5 million to 8 million, according to Alexei Kudrin, chairman of the Russian Accounts Chamber, a federal budget watchdog.

Putin has not been able to project a sense of leadership when it comes to the pandemic.

Analyst Steven Pifer of the Brookings Institution compared him to President Trump, downplaying the scale of the crisis and belatedly shifting course. Like Trump, Putin appears eager to escape the confines of isolation and videoconferencing for comfortable stage-managed events, particularly those with a military flavor.

It seems long ago that Putin stood on the deck of the missile cruiser Marshal Ustinov in March, wearing a military hat and fur-trimmed jacket and observing Russian missiles flashing over the Black Sea. In late December, he rode next to the train engineer to launch a controversial rail link across Russia’s Crimean Bridge.

“This is something that is really outside of Putin’s experience, and he’s having a hard time figuring out how to deal with it,” Pifer said. “He is better on the foreign stage than he is domestically.”

Other missteps have added to the impression that Putin is out of touch. In March, he stunned Russians when he told the Tass news agency that 70 percent of the population was “middle class” because they earned $11.30 or more a day.

Press secretary Peskov said last week that there were no plans to specifically help Russia’s middle class in the crisis, “nor should there be.” There are measures to support the whole population, he said.

The decision to fight an oil-price war with Saudi Arabia deepened Russia’s economic crunch. Putin promised hefty aid to large, strategic companies, but help for small businesses was limited and came too late to save many from bankruptcy.

Moscow-based economist Evgeny Gontmakher said Russia is a vast, difficult-to-manage nation at the best of times. Now, some weak regional governors are out of their depth, but Putin could not replace them “in a crisis,” he said.

Tatiana Stanovaya of the Carnegie Moscow Center argued that regional bosses have forgotten how to make decisions in a Putin-controlled system, terrified of failure and dismissal. But Putin sees regional control measures like local quarantines as beneath “the presidential agenda.”

“He is used to focusing on issues that, as he sees it, determine the country’s future in the global arena, its geopolitical position,” she wrote in a commentary.

A national vote on constitutional changes to extend Putin’s presidency had been scheduled for April 22. It was to have been bolstered by copious archival footage on state TV of the chaotic post-Soviet 1990s under President Boris Yeltsin, meant to project successor Putin as a guarantor of stability and prosperity.

The expected endorsement of the populace — allowing Putin to stay on after his term expires in 2024 and to run in two more elections — was to have been capped off with a triumphal military parade marking the 75th anniversary of Russia’s Victory Day, with top leaders from many parts of the world, including China’s Xi Jinping and France’s Emmanuel Macron. Both events were postponed.

Putin’s declining popularity ratings reflect the disenchantment of many Russians with a political class they see as focused on getting rich and staying in power. Even the state-owned opinion pollster VTsIOM had bad news in March. When Russians were asked whom they trusted to solve important issues, only 28 percent said Putin, the lowest result in 14 years.

According to independent polling agency Levada, Putin’s approval rating is 63 percent, high by Western standards — with no domestic political rivals.

According to analyst Maxim Trudolyubov, writing in the Wilson Center’s Russia blog, Putin’s base is state employees, who account for 40 percent of the workforce, so he feels no pressure to bail out small businesses. But that could trigger protests from those hurt most by the economic pressures.

“It’s really risky, because if you have no money to buy bread for the family, this person can be very dangerous,” said the economist Gontmakher. “He will begin to openly test the government and Putin. I think it’s a very dangerous, very risky situation for our authorities.”