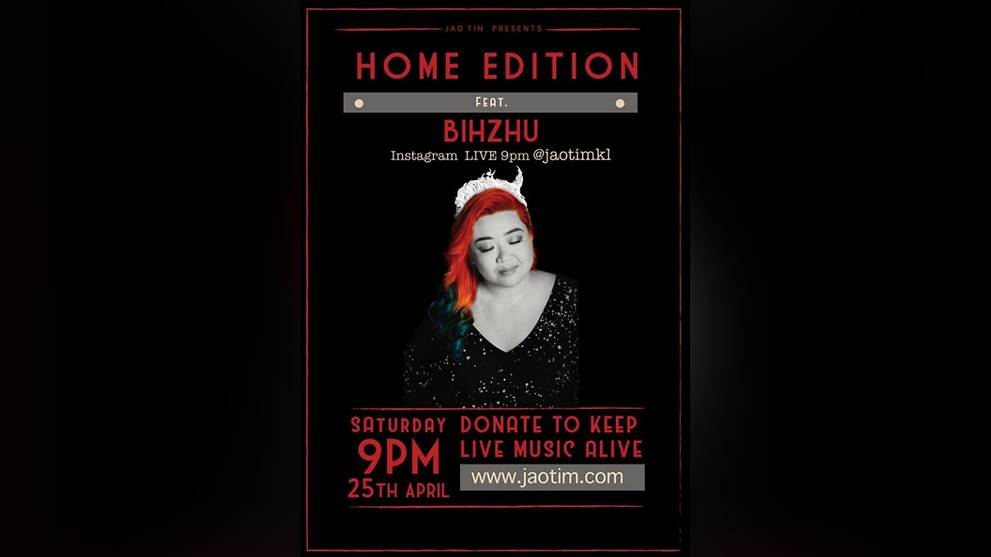 She twirled in front of the handphone when an Instagram user complimented her outfit at the start of her hour-long performance hosted on the account of Jao Tim, a cafe and event space in the heritage enclave of Petaling Street in Kuala Lumpur.

“A lot of my songs are sing-alongs and this one definitely is so get your sing-along muscles ready and we’re gonna do this,” the cheery jazz performer said, before launching into a soothing song of hers titled Bright Veins.

Alone in her own room without the presence of a captive audience, Bihzhu relied on the instant comments and bursts of colourful hearts at the bottom right corner of the app for real time feedback.

This was her second Instagram Live performance since Malaysia imposed a movement control order (MCO), barring social gatherings and public events from Mar 18 onwards. The MCO – and the subsequent extensions until May 12 – has dealt a great blow to musicians, artists and theatre performers alike whose livelihoods depend on live shows.

Cooped up indoors like everyone else, some of them turned to online platforms to bring themselves right to the homes of their audience. There was no stage lighting, sound system and elaborate stage design, but the interactions felt personal and fun – even if they were interrupted by technical glitches or patchy Internet connection.

The audience, whose entertainment options and social interactions were limited by the MCO, could afford to give their undivided attention.

With social events still barred even as many of the COVID-19 curbs were eased on Monday (May 4), the performers are not optimistic that they can play in their usual performing venues when the MCO is slated to be fully lifted next week.

Some are exploring uncharted territories to bring their creative work online, making the best out of the coronavirus crisis while waiting out the storm.

Jao Tim, the cafe which attracts patrons with its Art Deco glamour, has shifted its jazz concerts and jam sessions to Instagram Live, featuring one musician a day from 9pm to 10pm.

These sessions kicked off on Apr 10 with Tay Cher Siang, the pianist from WVC Malaysian Jazz Ensemble who appeared in the Hollywood hit Crazy Rich Asians.

“Music, right now, is a need for everybody. To me, music heals the soul,” Jon Teo, the owner of Jao Tim, told CNA.

Through contacts and referrals, Teo reached out to the musicians. Instagram Live turned out to be a new experience for many of them, who are used to live gigs.

“They tell me it feels like playing for the first time. It kind of opens everyone’s eyes, it makes them feel positive when they get ready, practise and do sound check, almost as if they are doing a real performance,” Teo said.

“This initiative gives them a light to look through a tunnel, to play again,” he added.

READ: Adopt a sun bear or terrapin – Wildlife conservationists in Malaysia appeal for donations to ride out COVID-19 impact

Many of the musicians have their own home studio, but not the equipment needed to go live on social media. To solve this problem, a wooden box containing Teo’s microphone for mobile phones, some tech accessories and a book for the performers to sign has been on the road since Apr 10, being passed from one musician to the next via delivery riders.

Every night, music lovers from near and far tuned in to these live sessions to bask in the music and encourage the performers. Some also responded generously to Jao Tim’s call for contributions to a fund for musicians affected by the pandemic.

“(Facebook and Instagram Live) are definitely a great way to connect with people, to still be able to share and perform and give,” Bihzhu told CNA.

“But one thing I’ve had to come to terms with, I don’t think life is ever going back to the way it used to be … I’m learning to accept that change is here, and I will need to flow with it, whatever it is.”

MOVING WITH THE DIGITAL TIMES

Moving with the times and leveraging social media has been one of the key takeaways during the MCO for accomplished Penang-based Teochew opera actress Ling Goh.

In one of her latest videos posted on Facebook, she and her brother Elvis Goh picked a cat filter for their duet. The pink cat ears and whiskers are an adorable contrast to the traditional art form, which is celebrated as a synthesis of singing, drama and puppetry.

For the past seven weeks, Ling Goh has kept Teochew opera fans entertained with scores of Facebook Live, from putting on elaborate stage makeup to maneuvering the Teochew opera puppets.

To add more flavour, the founder of Teochew Puppet & Opera House also invited local as well as foreign opera performers from Singapore and China to join her online.

Pre-MCO, she had been streaming her stage performances live. But using Facebook Live during the MCO allowed her fans to interact in real time with her.

One of her live sessions for fans to request for songs even chalked up more than 17,000 views, an indication that the folk art still has a loyal following.

“Unlike performers of pop songs and oldies, we cater to a niche audience. For our Teochew numbers, only those who understand the dialect will tune in,” Ling Goh said.

“When we performed at temples, there were perhaps 10, or even five, people watching. With Facebook Live, at one time I could have about 200 viewers online, but maybe this is because everyone is just sitting at home and has nothing else to watch.”

Going on Facebook Live is both to keep herself occupied and to promote Teochew opera, an art she inherited from her family of opera practitioners. The hair pieces she is using, for instance, were made with real hair and passed down to her.

Before MCO, Ling Goh performed an average of 10 shows a month. If live performances are still restricted after MCO is fully lifted on May 12, she said she would continue to share more online.

Likewise, Linda Ang Siew Kim, founder of kids’ theatre Hongjiejie Work Station, has taken to Facebook to read a story book a day, with her 12-year-old son doubling as her cameraman and technical director.

“I am an active person and I cannot sit still at home. If I have to face my kids for 24 hours a day, I will go crazy,” she said with a laugh. “That’s why I am doing this, for parents to take a rest while their kids listen to a story.”

A voice actress and former deejay, Ang has found her calling in storytelling. Fondly known as Hongjiejie, she ventured into kids’ theatre to bring stories alive to the young audience.

All four of Hongjiejie Work Station’s planned shows this year had to be cancelled, as the conoravirus began to show signs of upending everyday life.

A straw poll on her Facebook page showed that parents would only start bringing their kids to theatres next year.

“The live atmosphere cannot be duplicated on social media live. People can leave comments, can press the ‘love’ button and there is interaction, but I really want to see their faces and hug the kids. I don’t know how long we have to wait for,” Ang said.

But she knows she has to face the reality and plan for the months ahead. Bringing her shows online is the only way.

The proposal is to present one or two online theatre shows a month, co-produced by Hongjiejie Work Station and Poco Fun Play, for a period of 10 months. Sponsorship was set at RM38 (US$8.80) a month or RM150 for five months to fund the production and filming.

“I wrote the post and sat on it for three days. Is it too expensive? Is it hard for people to part with this amount of money?

“I was thinking, people perhaps need food and warmth more than arts at this time. I was very nervous,” she recounted.

To her surprise, they reached the goal within a day and collected close to RM27,000 as of May 4, with encouraging messages pouring in.

They are planning to begin the production as soon as it is permitted to do so. For now, she is busy learning the language and tools of the digital era.

“Just two days ago I took a class on TikTok. My friends have been showing me lots of videos and teaching me what to write for the description and what hashtags to put to increase the searchability.

“I want to have a better understanding of the trend. How do I penetrate the online market? People in the theatre industry have been resisting moving online – we want live performances. But when this is not feasible, we have to move online,” Ang said.