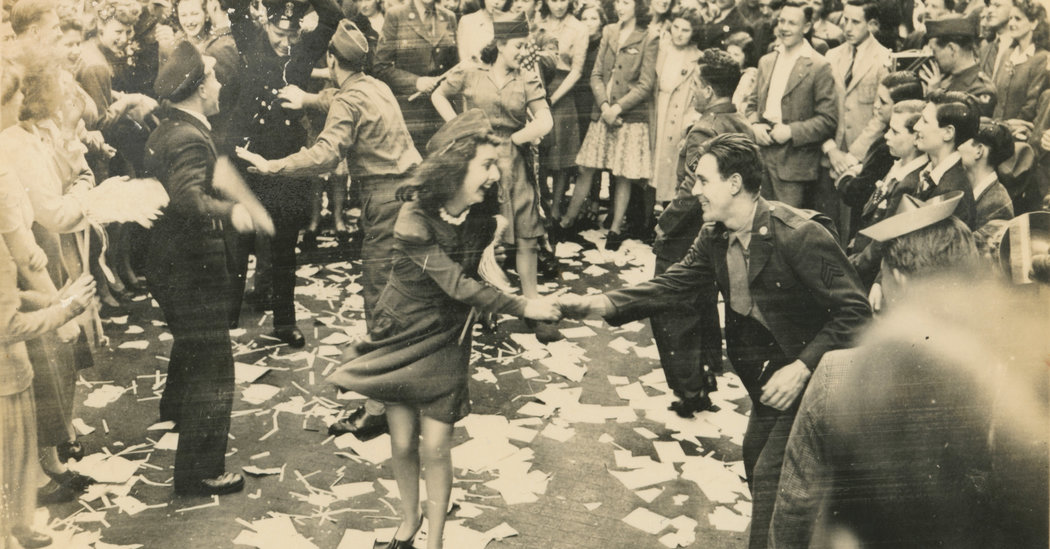 After years of combat stretching from the Atlantic Ocean to the Middle East, rumors began to spread in spring 1945 that the German army was close to surrender. So hotly anticipated, this long-hoped-for event had been given a name before it became a reality: V-E Day, for Victory in Europe.

The term first appeared in The New York Times on Sept. 10, 1944, just over three months after the Allies took the beaches at Normandy and began their march inland. Nine days later, President Franklin D. Roosevelt ordered government agencies to begin making plans for the demobilization of the roughly three million civilians supporting the war effort. “The transition from war to peace should be carried forward rapidly,” Roosevelt said. “This is the time to do the planning, although the war — even in Europe — is not over.”

Over the next six months, the Allied forces squeezed the German army along two fronts back to its prewar borders, and by spring, the end of the war felt close at hand. On May 7, 1945, the news of Germany’s surrender spread quickly around the world.

The photos that follow show 13 countries commemorating that fateful day: from jubilation in the streets across the United States and Britain and Kenya and Burma; to the front lines, where newspapers detailed the official signing to service members; and to houses of worship filled with people offering prayers of gratitude.

There was a strong conviction that better days were ahead, even though the bitterly fought war in the Pacific was forecast to continue at least into 1946 if not 1947. In America, V-E Day was a commemoration of a major milestone — a victory against the Nazis that was not at all a certainty when the United States entered the war. And for those living in countries that had been occupied or under attack from German forces, their war was finally over and the time to rebuild was at hand. — John Ismay

In London, beer deliveries were already en route, and parties kicked off the night before. In Paris, which the Allies liberated on Aug. 25, 1944, Parisians and soldiers “let themselves go with abandon” in celebration of the advance news, which carried on even with shortages of alcohol because of rationing, Harold Callender reported in The Times.

In the Americas, people danced in public squares in Costa Rica as a 21-gun salute roared, confetti fell and fireworks popped in Brazil’s capital of Rio de Janeiro, and in Colombia, the government declared a two-day holiday.

Hundreds of thousands of people gathered in Times Square.

In Manhattan, the impending surrender led to widespread celebrations. People working in high-rises threw homemade confetti from windows, disappointing the city’s sanitation commissioner, who rued the loss of more than 1,000 tons of the “vital war-commodity” that his crews had to clean off the streets, according to The Times.

British servicemen and members of the Danish Red Cross in Copenhagen.

In the streets of Toronto.

On May 8, Times Square filled with hundreds of thousands of revelers — though the party was curtailed a bit by rain that began falling at noon. (Bars and grills did “a rushing business” all day.) The brownout of nighttime lights that lasted throughout the war ended across America, with the lights of Broadway shining once again and the Statue of Liberty bathed in light after sunset.

On May 6, 17 reporters were invited by the U.S. Army to Reims, France, to witness Germany’s official surrender, which was signed at 2:41 a.m. the next day. They were told by Army officials that the news of the surrender was on hold — for 36 hours. (Officials at Supreme Headquarters said the hold was enforced to allow the Soviets to host a second surrender ceremony in Berlin.)

Like his colleagues, Edward Kennedy, an A.P. reporter, reluctantly agreed to honor the embargo, but after returning to Paris later that day he learned that Germany was broadcasting news of the surrender, under the order of the Allies. He picked up the phone and transmitted a dispatch in the early afternoon from his hotel in Paris to the A.P.’s London bureau, which relayed it to A.P. headquarters in New York.

Germans in Hamburg read leaflets that were dropped on V-E Day by the British Royal Air Force.

Word of Germany’s unconditional surrender quickly spread across the country and the world. The next day, it was Kennedy’s story that made the front page of The Times.

While Kennedy gave the A.P. a scoop of a lifetime, the decision to circumvent the censorship agreement also ruined his career. Some of his colleagues viewed his actions as unforgivable, and dozens signed a petition condemning his actions. The A.P. first suspended him, and, eventually, fired him. It wasn’t until 2012, decades after Kennedy had died after being hit by a car, that the A.P. apologized for how it handled the situation.

Soldiers of the Third Army in Europe pieced the news together from German radio broadcasts announcing the surrender and the orders they received to observe a cease-fire. A Times reporter there reported that some soldiers celebrated the news by building bonfires, firing multicolored flares and antiaircraft guns with their red tracers into the sky.

Members of the Third Army in Dorfen, Germany.

A parade in Kalimpong, India.

To notify Japan of the victory, U.S. forces fired a simultaneous salvo of artillery and naval guns at targets in southern Okinawa in the early hours of May 8, before the official declaration of V-E Day.

London’s St. Paul’s Cathedral, which suffered some damage but survived Germany’s brutal bombing campaigns, held 10 services in a single day. Each one was attended by thousands of people to offer prayers of gratitude for peace and to honor those killed.

A wreath sent by President Harry S. Truman was placed on the grave of Franklin D. Roosevelt in Hyde Park, N.Y.

V-E Day came as flags around America were still at half-staff in honor of President Roosevelt, who had died from a brain hemorrhage on April 12.

All were mindful of the war yet to be won against Japan, and the toll it would likely entail.

A reminder to buy war bonds at a bank on Fifth Avenue and 40th Street in New York.