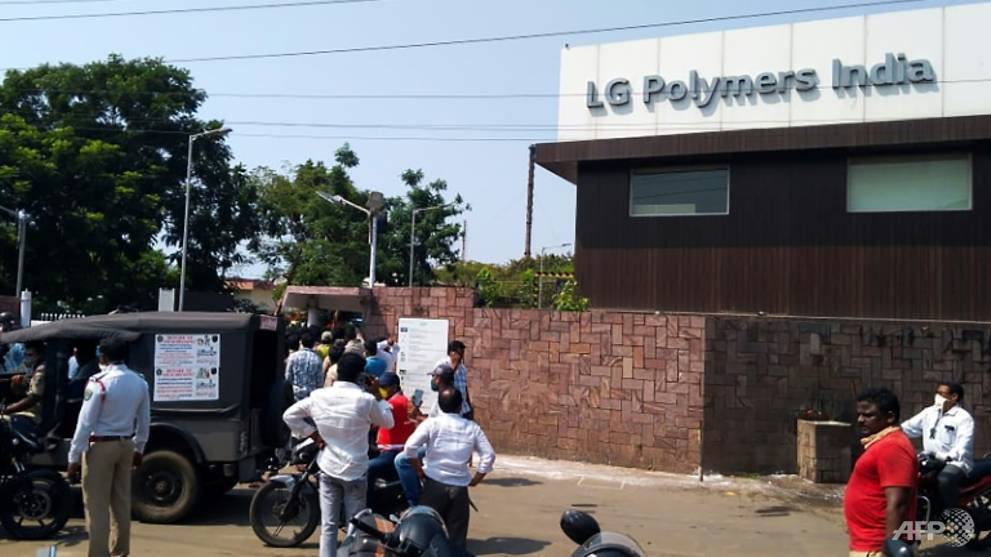 VISAKHAPATNAM, India: At least five people have been killed and 1,000 hospitalised after a gas leak at a chemicals plant on the east coast of India, authorities said Thursday (May 7), warning the death toll would climb.

The gas leaked out of two 5,000-tonne tanks that had been unattended due to India’s coronavirus lockdown in place since late March, according to a local police officer.

Footage on Indian television channels showed people, including women and children, lying in the streets of Visakhapatnam, an industrial port city in the state of Andhra Pradesh.

B K Naik, district hospitals coordinator, said that at least 1,000 people had been sent to different hospitals, and that it was feared many others may be unconscious in their homes.

“Another thing is that it is still too early in the morning, and there are people who were sleeping inside their homes (around the gas leak) and are unconscious,” Naik told AFP.

“The authorities are checking (in houses) as well. We are working to get people to the hospital. They need oxygenation and fresh air.”

Pictures taken by AFP at the King George Hospital in the city showed two or three patients on each bed, many of them children, and many unconscious.

Some of the patients were lying on the beds in the sparse hospital wearing just shorts and without tops or shoes.

The plant operated by LG Polymers is located in the outskirts of Visakhapatnam. The city and the surrounding area are home to around five million people.

“(The gas) was left there because of the lockdown. It led to a chemical reaction and heat was produced inside the tanks, and the gas leaked because of that,” Rani said.

She said local villagers raised the alarm around 3.30am.

“They said there was some gas in the air,” she said. “We reached there immediately. One could feel the gas in the air and it was not possible for any of us to stay there for more than a few minutes.”

According to the Times of India there were eight dead, including an eight-year-old girl, and 5,000 people had fallen sick.

The incident led to panic among locals in a radius of three kilometres (two miles) around the plant with many people seen lying unconscious on the roads, the paper said.

Others were having breathing problems and complained of rashes on their body and sore eyes, it added.

The News18 television channel also showed people slumped on the pavements in the streets in Visakhapatnam with several apparently unconscious.

Motorbikes were left in the middle of roads as though people had just fallen off them.

Ambulances were shown arriving to collect the injured on the roadside to take them to hospitals in the area.

India witnessed in December 1984 one of the worst industrial disasters in history when gas leaked from a pesticide plant in the central city of Bhopal.

Around 3,500 people, mainly in shanties around the plant operated by Union Carbide, died in the days that followed and thousands more in the following years. People continue to suffer its after-effects to this day.

Government statistics say that at least 100,000 people living near to the Union Carbide plant have been victims of chronic illnesses.

Survivors still suffer from ailments such as respiratory and kidney problems, hormonal imbalances, mental illness and several forms of cancer.

New generations have been made ill by the polluted groundwater and poisonous breast milk fed to them from birth.

To this day, children are still born disfigured with webbed hands and feet, weak immune systems, stunted growth and congenital disorders owing to the gas that affected their mothers.