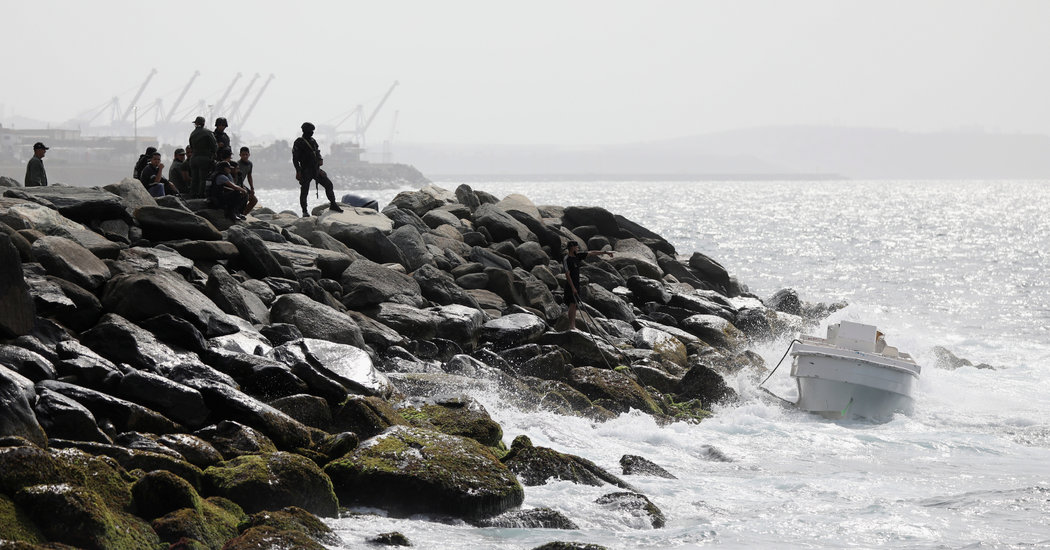 BOGOTÁ, Colombia — A disenchanted band of Venezuelan politicians and military deserters gathered in secret last year to plot the overthrow of Venezuela’s authoritarian leader, Nicolás Maduro. They determined they would need four tools to succeed: men, money, a plan and guts.

Jordan G. Goudreau, a United States citizen and former Green Beret, would be the guts. At least, that’s one version of the story.

Over the weekend, a group of self-declared freedom fighters set sail from Colombia to Venezuela on an apparent mission hatched by Mr. Goudreau to overthrow the Venezuelan government. The operation failed miserably, and the men were apprehended by the authorities. Eight of the rebels were killed. Two Americans, former members of the U.S. Army special forces, have been arrested.

But the figure who has emerged as the central character in what one official described as something out of a Hollywood script, is Mr. Goudreau, 43, who was not on the mission.

The Maduro administration has blamed the attack on the United States government, which has denied a connection to Mr. Goudreau or his Florida-based security company SilverCorp. The company claims it had entered into a $220 million agreement with the Venezuelan opposition to help oust Mr. Maduro.

Mr. Goudreau, who bragged about his involvement in the attack on Twitter and YouTube, has turned into an international curiosity, with observers around the world wondering what a decorated soldier who served multiple tours in Iraq and Afghanistan was doing leading a foreign insurrection.

“We always understood that he was a strong man who had won many awards,” said Hernán Alemán, a Venezuelan legislator who said he helped raise money for the plot. “We needed somebody who had that kind of courage.”

Over the last year, Mr. Goudreau, who was born in Canada but has American citizenship, helped craft an audacious scheme to oust Mr. Maduro, a leader known widely for overseeing his country’s economic downfall, and for jailing and torturing those who cross him.

The plan was called “Operation Gedeon.” In the end, there were just two boats with 60 men who were to storm the capital and capture Mr. Maduro. Mr. Goudreau later said his men vomited the entire way and nearly ran out of gasoline as they headed toward Venezuela.

Thirteen of the men were taken into custody, including the two U.S. citizens, both former Green Berets said to have been recruited by Mr. Goudreau.

State television ran photographs of the alleged prisoners, face down on the pavement. “They were playing Rambo,” said Mr. Maduro, who has used the failed attack to project national strength.

In an interrogation video released by the Venezuelan government, Luke Denman, one of the captured Green Berets, said he “was helping Venezuelans take back control of their country,” and expected to be paid $50,000 to $100,000 for his efforts.

Mr. Alemán, the Venezuelan legislator, said Mr. Goudreau did not participate in the raid because he was prevented by coronavirus-related border closures from traveling to Colombia to join his men. Instead, Mr. Goudreau, who lives in Florida, remained in the United States.

In Venezuela, Mr. Goudreau is seen as a huckster selling a suicide mission to desperate Venezuelans, as well as a hero committed to liberating the nation.

He has claimed that the attack grew out of a multimillion-dollar deal he made with the Venezuelan opposition, a group backed politically by the United States. In recent weeks, the State Department offered $15 million for information leading to Mr. Maduro’s detention.

At a news briefing in Washington this week, Secretary of State Mike Pompeo declined to discuss who might have funded the plot and said the United States government was not “directly involved.”

Mr. Goudreau did not respond to requests for comment, but in an interview with Factores de Poder, a YouTube channel, he said, “I am just a guy trying to help a group of people. I have been a freedom fighter my whole life.”

Following his departure from the military, Mr. Goudreau founded Silvercorp, which, according to its website, has planned international security for President Trump and the secretary of defense.

Mr. Goudreau’s Instagram account is filled with photos of him looking fit and battle-ready: shirtless and armed, shirtless and on the treadmill, on helicopters, in private airplanes and at Mexican ruins.

“We aren’t retired military,” he posted. “We are active-duty risk mitigation.”

Mr. Goudreau’s interest in Venezuela began in 2019, while working security at a concert on the Venezuelan-Colombian border in support of Mr. Guaidó. Soon, Mr. Goudreau began working with Cliver Alcalá, a former Venezuelan general who had publicly turned against Mr. Maduro, to train a small group of military defectors based at camps in Colombia, according another military trainer who was there.

At one point the group included around 150 men and women, Mr. Alemán said. But they had very little in the way of resources.

Ephraim Mattos, a former Navy Seal who runs a nonprofit company that employs former Venezuelan police and military personnel, said he visited the camp for about 10 days in the fall of 2019, thinking he was providing medical training to refugee Venezuelan soldiers. He was surprised to hear from the fighters that “there’s a specific plan to take out Maduro,” coordinated by Mr. Goudreau, he said.

The group was convinced that the U.S. government was backing the operation, Mr. Mattos said. But right away, the details did not add up for him. He took one look at Mr. Goudreau’s Instagram account and thought, “This guy is not the real deal, this is not a U.S. government, U.S.-sanctioned thing.”

“I was highly suspicious of this being backed by the U.S. government,” he said. “The men I was with, they did not have enough food.”

But the group was convinced, and so Mr. Mattos gave them tourniquets and bandages and left, he said. By the time the fighters were preparing to launch their attack, the situation had deteriorated even further.

There were also significant signs that the group had been infiltrated by Mr. Maduro’s allies, said Rocío San Miguel, director of Citizen Control, which tracks Venezuela’s armed forces.

And finally, on May 1, days before the attack, The Associated Press published an extensive article on the many months Mr. Goudreau had spent preparing to oust Mr. Maduro.

Still, the group pressed on, joined by Mr. Denman and Airan Berry, the two Green Berets recruited by Mr. Goudreau who have since been captured.

Reached by telephone this week, Mr. Denman’s mother, Linda Kay Denman, said she had no idea what her son had been up to, and thought he had been attending an underwater welding school.

“At this point, I don’t have any information on why or even what happened,” she said. “I am numb.”

On Sunday, Venezuelan authorities said they had captured a first boat, followed by a second. Mr. Alemán said he understood that the attack looked like a suicide mission, but urged people to understand the level of desperation shared by many Venezuelans.

He said he often visited the training camps and sometimes spoke with Mr. Goudreau about his reason for working with group.

“It pained him,” he said, “to see how Venezuelans were suffering.”