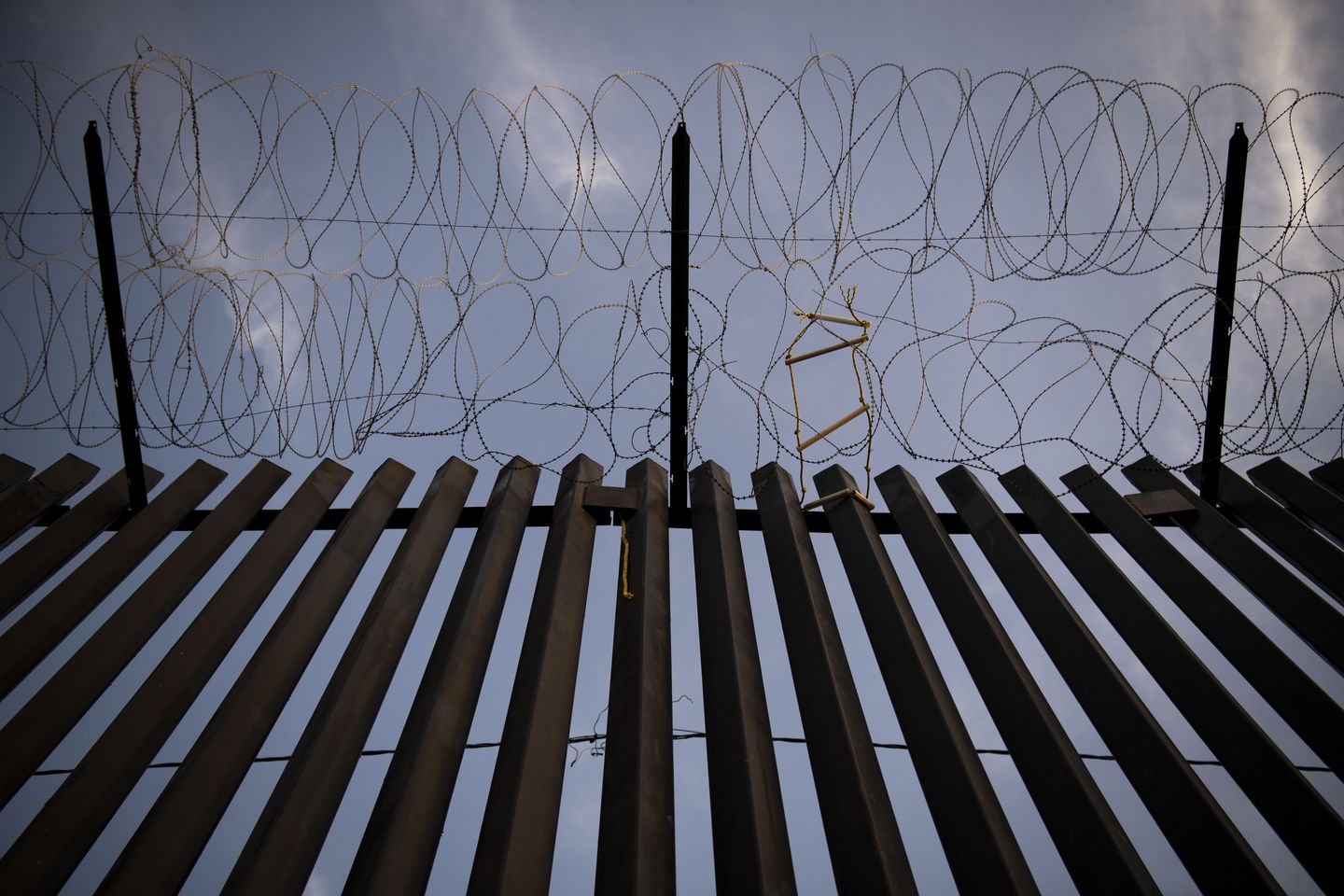 Trump has not let go of the idea, insisting that the dark color will enhance its forbidding appearance and leave the steel too hot to touch during summer months. During a border wall meeting at the White House last month amid the coronavirus pandemic, the president told senior adviser Jared Kushner and aides to move forward with the paint job and to seek out cost estimates, according to four administration officials with knowledge of the meeting.

“POTUS has changed his mind and now wants the fence painted. We are modifying contracts to add,” said one official involved in the construction effort who, like others, spoke on the condition of anonymity for fear of being fired.

Trump, during that meeting, directed aides to seek input from North Dakota-based Fisher Sand and Gravel, a company the president favors. Fisher has a $400 million contract to build a section of new barrier in Arizona, an award that is under review by the Department of Defense inspector general.

The Post obtained a copy of painting estimates that federal contracting officials produced, and it shows costs ranging from $500 million for two coats of acrylic paint to more than $3 billion for a premium “powder coating” on the structure’s 30-foot steel bollards, the high end of the options the officials have identified.

The White House has not yet chosen a grade of paint, but Trump has insisted for years that the barrier should be black to discourage climbers. He has favored a shade known as “flat black” or “matte black” because of its heat-absorbent properties.

The president has promoted the border wall in tweets as well as in private conversations in recent weeks, aides say, amid criticism of the administration’s handling of the coronavirus pandemic. He has also touted the structure — along with his efforts to block immigration — as a defense against the virus and a benefit to public health.

Trump has made the border wall a pillar of his reelection pitch, promising to finish 500 miles by early next year, a goal that will require crews to nearly double their pace in coming months. Crews have completed about 175 miles of new barriers so far, according to the latest CBP data.

The White House declined to comment. A White House official speaking on the condition of anonymity to discuss internal matters said Trump thinks the black paint would make the structure more difficult to climb and less likely to rust. CBP did not respond to requests for comment on Trump’s decision to have the wall painted.

The steel used for the project is designed to be weather resistant, with a 30-year service life, despite exposure to intense solar radiation and extreme temperature changes. Painting the bollards would add significant costs to what already is one of the most expensive federal infrastructure projects in U.S. history.

The unpainted metal absorbs a significant amount of solar energy in the desert environment, and black paint would increase its ability to retain heat — or “emissivity” — by less than 10 percent, according to Rick Duncan, a materials engineer who works for trade associations and specializes in rooftop coatings.

“It won’t make much of a difference,” Duncan said. “There’s no technical reason to paint it to make it hotter.”

He also said the black paint will lose heat absorption as it fades from exposure to the sun. Sections in southern Arizona and other desert areas probably would need to be repainted after about 10 years, Duncan said.

The White House has obtained about $15 billion for the project so far, two-thirds of which has been diverted from Defense Department construction funds and counternarcotics programs. CBP projections indicate the money will pay for approximately 731 miles of new barriers, but those estimates did not take into account the president’s painting plans.

Officials working on the project said the paint job risks slowing the pace of construction, because crews will need to return to already completed sections of the barrier, which quickly oxidizes into an orange hue with exposure to the elements.

Engineers also note that painting sections that are already set in concrete and weathered will be significantly more expensive than painting the bollards in advance of setting them in place.

“Painting it before it’s installed would be cheaper,” said Ed Zarenski, a retired construction cost estimator in Massachusetts who worked on large public works projects. “Otherwise you’ll have to run a bucket truck on both sides of the barrier.”

One official with knowledge of the plans said it wasn’t clear how the painting crews would operate on the Mexico side of the barrier, where only a narrow strip of land separates the two countries. Painters would potentially need to apply the black coating using a specialized boom long enough to extend up and over the barrier from the U.S. side.

The Trump administration had a section of new barrier in California painted black last year, at a cost of about $1 million per mile, but U.S. troops provided the labor for that effort, reducing costs.

The private contractors are projected to charge about $1.2 million per mile to apply two coats of acrylic paint, estimates show. That is by far Trump’s cheapest option, but documents note that repairs to the structure will be impossible to color-match with the acrylic paint, making welds and other patches obvious and unsightly.

Scarring is certainly a factor in high-traffic border regions. The Post reported last month that smuggling crews in the San Diego area sawed into the new bollard fencing 18 times during a one-month span last year.

Other midrange paint options include a military-grade epoxy coating and sealant used for dams, canals and other hydraulic infrastructure projects, known as System 21, the documents show. It is highly resistant to abrasion and rust and is amenable to welding, but the cost would be at least $4.5 million per mile.

Even more expensive would be a black powder coating, a process commonly used to paint cars and appliances because of its sleek appearance. It would cost $6.8 million per mile to apply, according to the government estimates.

Trump told military commanders and border officials to research different painting options and to consult with Fisher in particular.

Last year, after Sen. Kevin Cramer (R-N.D.) heavily promoted Fisher to the president as a cheaper option for building the border wall, Trump urged aides to give the firm a building contract. The North Dakota company and its owner have donated to Cramer and the president, and the company sued the government when its border wall bids were not accepted.

The U.S. Army Corps awarded the company a contract worth up to $400 million in December to complete 31 miles of new barriers along a national wildlife refuge in Arizona. After lawmakers raised concerns about White House interference in the contracting process, the Pentagon’s inspector general said it would audit the Fisher deal.

One administration official working on the project said Trump’s mention of Fisher in a recent meeting about the wall project did not amount to an attempt to influence the painting contract, and instead reflected his opinion of the company and its CEO, Tommy Fisher, whom the president sees as an innovative thinker and loyal supporter.

Attorneys for Fisher did not respond to requests for comment.

During the same White House meeting, Kushner expressed frustration at the pace of land acquisition in the Rio Grande Valley of South Texas, where the Trump administration is preparing to seize hundreds of parcels of private land from owners who have refused to sell.

Trump’s son-in-law, who is also at the center of the administration’s pandemic response, has been placed in charge of overseeing construction. He expressed frustration at this role during the meeting, telling others the wall was not his favorite project but that he is the only one who can get it done.

A White House official said Kushner was only reiterating that the wall’s progress had been much slower — and had produced less coverage than Trump wanted — before Kushner took over the effort. The White House declined to discuss Kushner’s statement.

Three officials with knowledge of the meeting said Kushner complained that the current firms contracted to assist with land acquisition were not moving quickly enough, and he urged military commanders and border officials to work with larger firms capable of performing a broader array of services, such as survey, title work, appraisals, condemnation packages and design.

The administration plans to build about 150 miles of new barriers along the banks of the lower Rio Grande, where nearly all of the land is in private hands.

Raini Brunson, a spokesperson for the Army Corps of Engineers, confirmed this week the agency has requested information from additional real estate firms.

As the White House border wall meeting wound down, Trump was shown pictures and charts of the wall, and was pleased to hear that crews remain on track to complete nearly 500 miles by November.

About 75 new linear miles have been added since the beginning of the year, so contractors would need to more than double the pace of construction in the coming months to fulfill that goal.