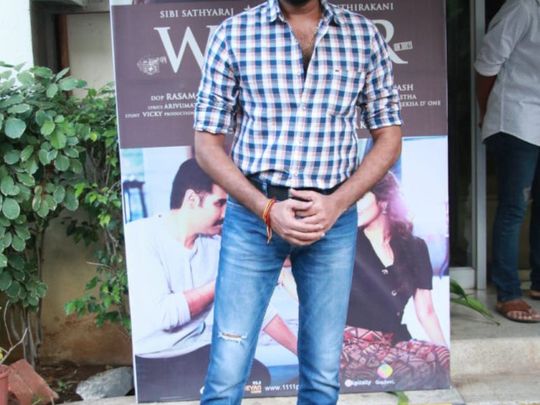 He was a versatile actor who could step into any shoes and turn an ordinary role into a memorable character with his extraordinary performance. That was Irrfan Khan whom we lost few days ago.

Having watched him since his television days and later admired him for his films, my fan moment happened in 2012 when I interviewed him for Gulf News during the promotions of ‘Life of Pi.’

“I first worked with him in ‘Knock out,” said Natty.

“I know him more as a friend. Me, Imtiaz Ali, Anurag Kashyap and Irrfan often met over dinner or at Prithvi theatre [Mumbai]. It was more like college buddies catching up and not as technicians or actors. Irrfan was someone you can call anytime. If he missed your call he returned it. He was completely unassuming and mingled with everyone.

As an eight year-old, Kumar remembers watching ‘Chandrakantha,’ a television series of the nineties. It was his first introduction to late actor Irrfan. Growing up and watching Irrfan’s films including ‘Maqbool,’ he became his admirer.

In 2013, when Kumar’s film ‘Lucia’ was screened at the London Indian Film Festival, Khan walked in as the chief guest.

“I met him during lunch and he left without watching my film,” recollects Kumar. “I was a bit disappointed. However on the flight home I was informed that ‘Lucia’ won Best Film Audience Choice award and Irrfan was to announce the winner. So Irrfan wanted to see ‘Lucia’ before that. I travelled to Mumbai and met him at his house. He watched ‘Lucia’ on his laptop while I waited in the living room. He liked ‘Lucia’ and was impressed that it was crowd funded. I asked him if I could video record his comments and without any fuss he agreed. I had my handy-cam ready and his fifty seconds on ‘Lucia’ helped the film reach a wider audience. He was interested in the Hindi remake of ‘Lucia’ and asked me to get in touch if remade. I was keen on working with Irrfan someday. Sadly it never happened.”

“He was full of energy and spoke in high decibels,” remembered Natty. “He used to call me ‘Madras don,’ the other don he referred to was director Imtiaz. Rishi Kapoor preferred calling Chennai, Madras having spent early years as a child artist shooting in studios here and picked few lines in Tamil. Neetu (his wife) however spoke fluent Tamil. Again she too had spent a good time in Chennai as a child artiste shooting at AVM and Vahini studios. Surprisingly she still remembered the language and we often spoke in Tamil. Rishi Kapoor would tease us-‘Don’t be regional.’

My first day of shooting with him was at a riverside restaurant in London. After clicking his shots and combination scenes, I went around filming long shots. Noticing me he wondered what I was doing. Seeing the edited scenes the next day, he appreciated, ‘This is new school. In our days a body double was used for long shots- you people are so precise.”