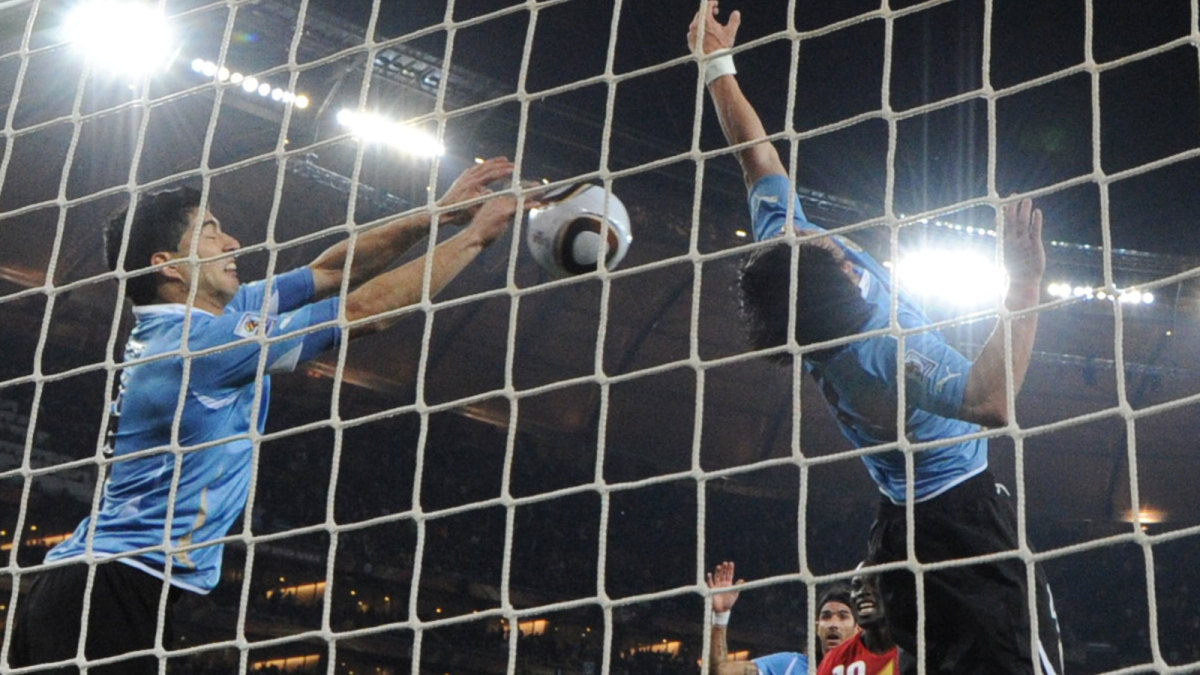 This story is part of our series looking back on the 2010 World Cup and its biggest moments and themes with a decade’s worth of perspective. For more, read about the lasting legacy of the competition in South Africa, the long-tail impact of Frank Lampard’s ghost goal vs. Germany and how France’s debacle planted the seeds for its 2018 success.

It had been a game more notable for its tension and the sense of the history that might be about to be made than for its inherent merits. Sulley Muntari had put Ghana ahead with a 35-yard drive just before halftime–although this being the 2010 World Cup, Fernando Muslera was beaten more by the unpredictable swerve of the Jabulani than a particularly exceptional strike. Diego Forlan had leveled with a second-half free kick, which again owed a lot to the ball changing course unexpectedly. But as the game dragged into extra time, Ghana looked like the stronger side. Could the first African World Cup be crowned by an African side making the semifinals for the first time?

As the game entered the 120th minute, Ghana won a free kick on the right. This was almost certainly the final chance of the game. John Paintsil slung it over the wall, after which a lot things happened very quickly. Kevin-Prince Boateng flicked the ball on. Muslera came and got a fist to the ball just before it reached John Mensah. It fell for Stephen Appiah, whose shot was blocked on the line by the shins of Luis Suarez. The ball bounced up and Dominic Adiyah came in with a firm header. It flew past Diego Fucile’s attempts to block but Suarez again intervened.

From the press box, high above the halfway line, it was a pinball impossible to follow. But it became apparent that the linesman was flagging and that the whistle had blown. The assumption was an offside or a push, although there was half a thought that the ball might have crossed the line. But as the Portuguese referee Olegario Benquerenca walked across the box it became apparent he had taken a red card from his pocket. That, reasonably, could mean only two things: a handball and a penalty.

Sure enough, the replay confirmed it. Fucile had clawed at the ball and missed, but Suarez, leaping to his right, had pushed the ball away, purposefully reaching out with both hands. Reluctantly, Suarez left the pitch. He tried to linger by the line, but a FIFA official, grasping his arm, led him on. Footage from inside the tunnel subsequently showed him walking, eyes lowered, and then–hearing the roar as Asamoah Gyan smacked his penalty against the bar–turning back and celebrating.

Suarez was notably unapologetic for his act after Uruguay had gone on to win following a penalty shootout.

“The Hand of God now belongs to me,” he said. “Mine is the real Hand of God. I made the best save of the tournament. Sometimes in training I play as a goalkeeper, so it was worth it. There was no alternative but for me to do that, and when they missed the penalty I thought, ‘It is a miracle and we are alive in the tournament.’ Now we are in the semifinals although I was very sad, because no one likes to be sent off.”

Few Uruguayans seemed concerned by the moral implications of having progressed by a handball. And it’s not as if Suarez’s act was without consequence. It was blatant, and he paid the price in the moment–Ghana just failed to capitalize. Forlan went so far as to praise Suarez’s sacrifice in earning a suspension to keep his nation alive.

“It is a pity we won’t have Luis for the semifinal, but he made a good save,” said Forlan, who went on to win the Golden Ball at the competition. “He didn’t score a goal, but he saved one. He was sent off, but he saved the game for us.”

For Suarez, who was still an Ajax player and just 23 years old at the time, this was his first major global controversy. A number of them would follow. Later that year he would bite PSV’s Otman Bakkal. Two further biting incidents would come in subsequent years: in 2013, he bit Chelsea’s Branislav Ivanovic while playing for Liverpool; in the 2014 World Cup, he bit Italy’s Giorgio Chiellini. In 2011, he was suspended for racially abusing Patrice Evra, and his career overall would go on to be characterized by aggression and general provocativeness on the pitch.

Given what we’ve come to learn about him, it would be easy to loop his act vs. Ghana in with his other acts of villainy. But how bad, really, was it? Was spreading himself to block the ball really anything other than an instinctive reaction any player–consider his teammate, Fucile, tried and missed–would make? Is it not more justifiable because it came from his determination to win and a belief that any act to achieve victory is worthwhile?

Jack Charlton, it is rarely mentioned, did much of the same in the 1966 World Cup semifinals for England against Portugal. Eusebio scored the penalty and Charlton stayed on, because there were no automatic dismissals for handballs on the line in those days. Charlton was known as a tough and aggressive defender, but nobody thinks of him as a cheat. Conversely, those who have scored with their hands do tend to be vilified, Diego Maradona and Thierry Henry most notably. Maradona provides a useful test case: his handball on the line against the USSR in 1990 is almost never mentioned today. For some reason, football finds scoring with a hand more despicable than denying a goal with one.

And, of course, in Suarez’s case, the handball fits a wider pattern of behavior. But of all his outrages, this is perhaps the most understandable and the most forgivable. The unfortunate aspect is that this foul ended the dream of an African semifinalist. But then as Serbia would point out, if it had been awarded the penalty it should have been with five minutes remaining against Australia–and scored it–Ghana wouldn’t even have gotten out of the group.