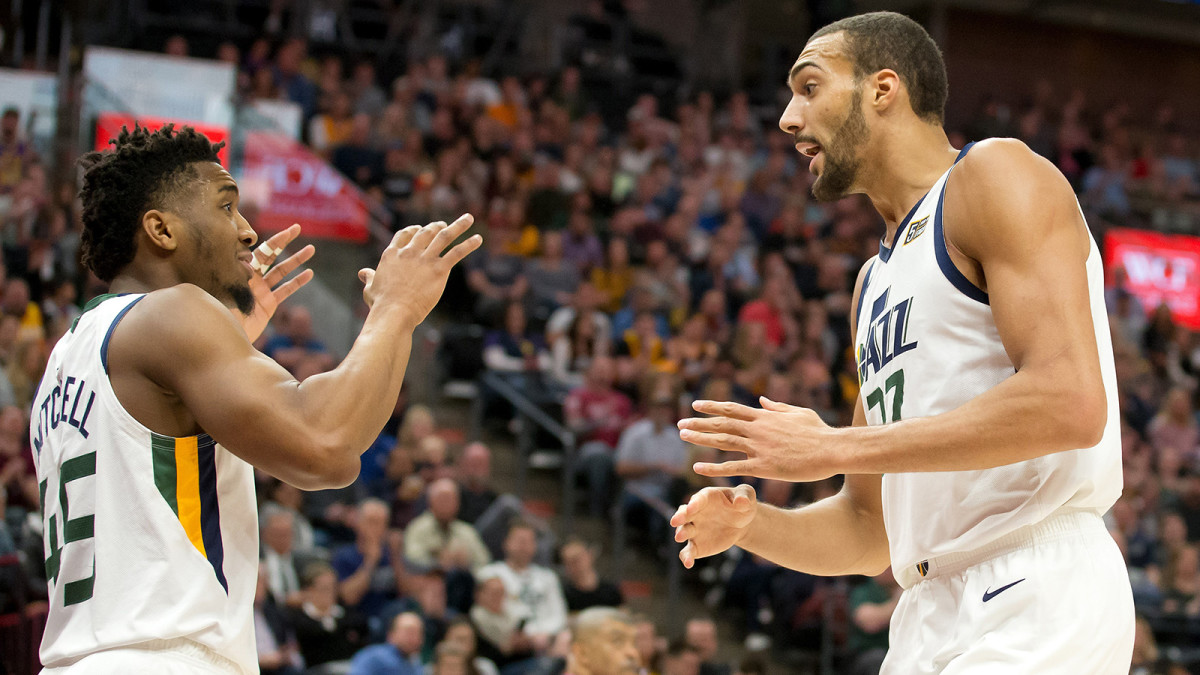 What’s up with Donovan and Rudy?

In a state of the Jazz video call on Tuesday—one of the few on the record interactions the media gets with team officials these days—Utah’s top exec answered a variety of questions. About resuming the ’19-20 season and re-opening practice facilities. About preparing for a draft under stay-at-home orders and how the Jazz will manage its finances post pandemic.

But there was really only one that mattered.

What’s up with Donovan and Rudy?

To recap: Donovan Mitchell and Rudy Gobert, Jazz cornerstones, locker neighbors, once thick as thieves, have seen their relationship publicly eroded. In March, Gobert contracted COVID-19, the coronavirus. His recklessness in not taking the virus seriously was linked to Mitchell becoming infected, too. SI.com was among the first to report that Mitchell was furious with Gobert, reporting Mitchell all but confirmed in an interview with Good Morning America days later. Reports swept through the internet that Mitchell and Gobert were finished.

So, Dennis: What’s up with Donovan and Rudy?

“They are ready to put this behind them, move forward [and] act professionally,” Lindsey said.

Well, that settles that.

It’s a shame, really, that L’affaire Gobert happened when it did. The Jazz, back when playing basketball was still a thing, were just starting to pick up some momentum. A promising season that began with dreams of a trip to the conference finals, dipped when Mike Conley struggled out of the gate, had regained some of its potential in the weeks before the NBA went on its indefinite hiatus. Utah had won five out of six entering the now infamous game against Oklahoma City. The Jazz had swept a four game road trip, with Conley chipping in 25 points in a win over Boston.

“We were just starting to improve as a team,” Lindsey said. “We found a few things, a few rotations that really worked.”

Then came the stoppage. Then things started to unravel.

Lindsey did his best to downplay any rift between his two stars. “They’ve said their piece to each other,” Lindsey said. “They’ve both visited at the ownership level, at management level, at the coaches’ level, the players’ level with each other, they’re fully participating in our Zoom workouts. There’s going to be another level, I think, for the whole team to get back to each other.”

“I think at the end of the day, Donovan and Rudy—I don’t want to speak for them on every matter, they’ll speak to themselves, moving forward—but I think at the most basic level, they know they need each other to accomplish the goals that we want to accomplish of being the last team standing in the NBA.”

Look—there’s no reason to believe Mitchell and Gobert can’t move past this. Mitchell was pissed, and perhaps rightfully so; Gobert has admitted his carelessness, and apologized. Mitchell found himself as one of the early faces of coronavirus in sports, at a time when information about the bug was relatively scant. Time, though, has a way of healing all wounds, and when you think about it, this wasn’t particularly deep.

And there’s no reason to want to see this team broken up. Gobert is the NBA’s most dominant interior defender. Mitchell is one of the league’s most explosive young scorers. Conley is under contract for next season (don’t count on him turning down a $34 million option) and should be even better with a greater understanding of his role. Quin Snyder is a top of the line coach and Utah has one of the strongest and deepest front offices in the NBA, one that excels at mining unheralded talent.

Still—it’s hard to know. It could be months before we know if the relationship between Gobert and Mitchell is unsalvageable, as The Athletic has reported. Or if both players have moved on, as Lindsey suggested. There’s a clock of sorts on this: Gobert is entering the final year of his contract. Utah likely wouldn’t blink at offering the 27-year old Gobert a lucrative long term contract next summer. But if Mitchell, who is eligible for what would be a max-level extension this offseason, doesn’t want to play with him? The Jazz could be forced into a difficult decision.

For now, Utah will try to move forward. Lindsey is hopeful the NBA season can resume, though like most he remains uncertain about when or how that can happen. The Jazz plan to re-open its practice facility to players in the coming days, though perhaps not as early as Friday, when the NBA is expected to allow it in states that have relaxed restrictions. A fourth seed in a loaded Western Conference, Utah is still hoping to meet those lofty preseason expectations.

“We’re very pleased with the collective makeup of our group,” Lindsey said. “Donovan and Rudy in particular.”