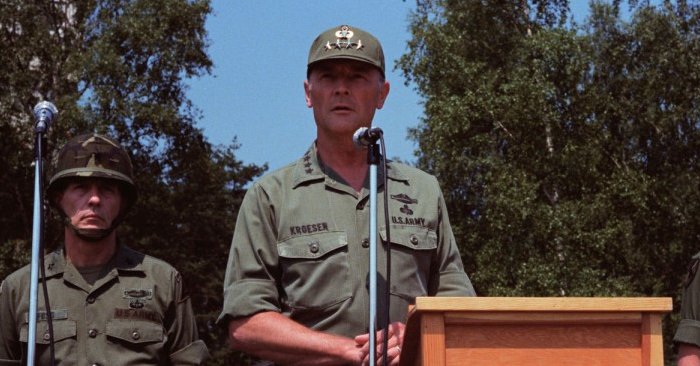 But when he died on April 30 in Alexandria, Va., at 97, he was remembered as well for narrowly escaping death in an assassination attempt by a left-wing German terrorist group on Sept. 15, 1981.

General Kroesen, the four-star commander of some 220,000 American troops as well as NATO forces in Europe, was being driven to his headquarters in Heidelberg, West Germany, in a Mercedes-Benz with armor plating, a precaution against a possible terrorist attack, when two rocket-propelled antitank grenades were fired at it from a wooded hillside.

The first one exploded in the trunk of the car, partly shattering its rear window, and exited through a fender. A second grenade missed the vehicle. At least eight shots were fired at the auto and an accompanying military police vehicle, but none penetrated the passenger compartments.

“The glass on the back window all broke — and I fell forward — and cut me all over the back of my head,” General Kroesen recalled in 1998 in an interview for an oral history project at Rutgers University, his alma mater. “My wife looked over at me, and she thought I was dead, because she thought that the whole back of my head had been blown out.”

General Kroesen and his wife, Rowene Kroesen, who had accompanied him on her way to a dental visit, were cut by flying glass and treated at a hospital, then went about their day’s tasks. No one else was injured.

The terrorist group that called itself the Red Army Faction, though it was commonly known as the Baader-Meinhof gang, took responsibility for the attack, the fourth one on American personnel and installations in West Germany in three weeks and the 10th that year. The group, which had waged a campaign of terror in the 1970s, subscribed to a Marxist-Leninist ideology and sought to overthrow the capitalist West German government and to fight what it perceived as American imperialism.

The assassination attempt made international headlines, including on the front page of The New York Times, for its brazenness, the prominence of its target and the realization that remnants of the Baader-Meinhof gang were resurgent, although the group’s leaders, Andreas Baader and Ulrike Meinhof, had committed suicide while imprisoned.

The German authorities embarked on a new round of arrests targeting the group in the years that followed. Two of its figures, Christian Klar and Brigitte Mohnhaupt, were arrested and convicted of killing three prominent West Germans and their bodyguards in 1977 and of trying to kill General Kroesen. They were sentenced to life in prison. Ms. Mohnhaupt was released in 2007 after 24 years in prison, and Mr. Klar was released in 2008 after serving 26 years.

When General Kroesen came under attack, he was holding what would be his last command. He retired in 1983 after 40 years of military service.

Frederick James Kroesen Jr. was born on Feb. 11, 1923, in Phillipsburg, N.J., a son of Frederick and Jean (Shillinger) Kroesen. His father, who served in World War I and later worked for the New Jersey state government, died when Frederick was 17.

He attended high school in Trenton, N.J., graduated from Rutgers in 1944, entered the World War II Army as a private and was commissioned as a lieutenant after attending Officer Candidate School.

He saw heavy combat as commander of an infantry company in France and Germany during World War II, then became a battalion commander in the Korean War. He was a brigade commander and later the commander of the 23rd Infantry Division, known as the Americal Division, in the Vietnam War.

Afterward, General Kroesen commanded the 82nd Airborne Division at Fort Bragg, N.C., and the VII Army Corps in Germany. He served as vice chief of staff of the Army in the late 1970s.

In addition to his degree from Rutgers, in agriculture, he received degrees in international affairs from George Washington University in the 1960s.

General Kroesen entered the business world after retiring from the Army. He was a senior fellow with the Association of the United States Army, a nonprofit advocacy agency, and an essayist for its publication ARMY magazine.

His death was confirmed by his son, Frederick III. He is also survived by his wife, Rowene (McCray) Kroesen; his daughters, Karen Klare and Gretchen Tackaberry; 10 grandchildren; 23 great-grandchildren; and a great-great grandson.

In recounting the German terrorists’ attack in his interview with Rutgers, General Kroesen said he had never experienced trauma from it. As he pointed out, he had led troops battling Hitler’s army.

“I used to say, ‘It’s not the first time the Germans shot at me and missed.’”