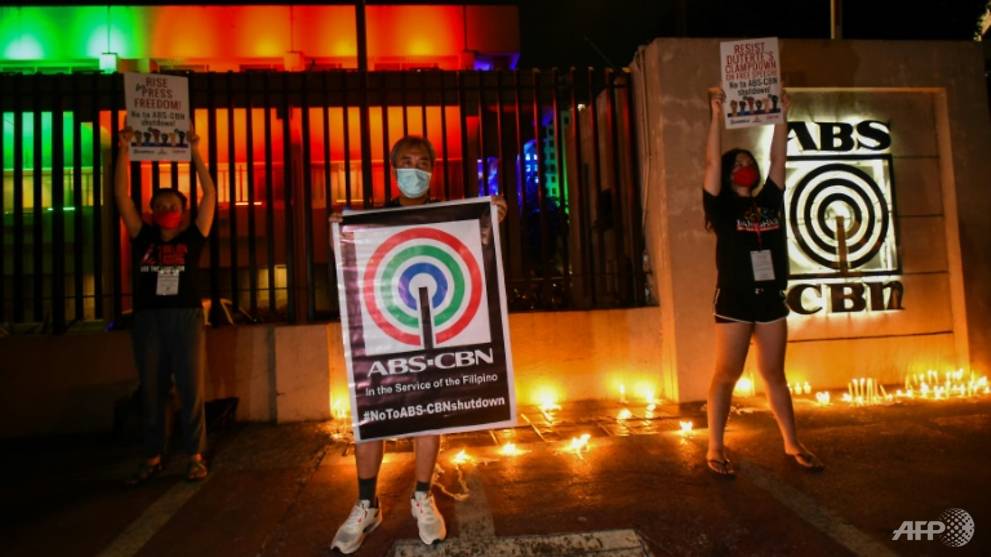 MANILA: The shutting down of the Philippines’ top broadcaster crosses a dangerous line in eroding the nation’s democracy and sends a warning to those who risk angering President Rodrigo Duterte, watchdogs said.

Since rising to power in 2016, Duterte has steadily tightened his grip on the nation’s key institutions and jailed or sidelined his loudest detractors, but until now his worst threats against critical media had not been fully realised.

Tuesday’s halting of broadcasting giant ABS-CBN’s operations marks the first time a major, independent outlet was shut down since Duterte took office in a step that echoes the country’s grim authoritarian past.

“This is a dark day for media freedom in the Philippines, reminiscent of martial law when the dictatorship seized control over news agencies,” said Amnesty International’s Butch Olano.

Its 25-year franchise expired on Monday, but officials had previously given assurances the radio, TV and Internet giant would be allowed to operate provisionally.

The outlet, which reaches tens of millions of Filipinos daily, ran afoul of Duterte in 2016 and since then the notoriously outspoken leader has repeatedly threatened it in speeches.

Early in his term, Duterte accused the media group of failing to broadcast his 2016 election campaign advertisements and not returning the payments made for them.

“All this stems from President Rodrigo Duterte’s personal vendetta against the network,” said the National Union of Journalists of the Philippines (NUJP).

Duterte arrived at the summit of Philippine politics as an outsider from the southern city of Davao and immediately set about consolidating his power.

His critics have been jailed, including Senator Leila de Lima, who has been behind bars for years on drug charges she insists were fabricated to silence her criticism of Duterte’s deadly drug war.

Others have been pushed from high-profile posts like Maria Lourdes Sereno, who was kicked off the nation’s top court in a procedure that critics said pushed the limits of constitutionality.

“WHAT DUTERTE WANTS, DUTERTE GETS”

Institutions such as the Supreme Court have shown little appetite to rule against Duterte on key issues, and the legislature is controlled by his allies or backers.

READ: Commentary: ‘He can do no wrong’ Rodrigo Duterte, the president Filipinos still love

He has also pushed back hard against independent media outlets such as website Rappler and major newspaper Philippine Daily Inquirer. Both have narrowly averted government moves to shut them down.

Journalist Maria Ressa, who is chief executive of Rappler, faces years behind bars in a cyberlibel case she says is retribution for her site’s critical reporting.

As pressure on the media intensifies, the Philippines has continued to fall in Reporters Without Borders’ World Press Freedom Index, hitting 136 out of 180 nations in 2020.

The Philippines has long ranked as one of the world’s most dangerous places to work as a journalist. In 2009, 32 media workers were among 57 people killed in the country’s worst political massacre.

However, the suspending of ABS-CBN’s operation marks a step further than Duterte’s government has gone until now.

“To a large degree we have crossed a line here,” said Carlos Conde of Human Rights Watch.

“This tells everyone to not mess with the government, it can happen to you.”

He noted that ABS-CBN was a major prize for Duterte that was also coveted by former dictator Ferdinand Marcos, who used martial law to shutter the legislature, muzzle the media and jail opponents in one of the Philippines’ darkest periods.

Marcos took control of the network in 1972 and it only resumed independent operation after he was toppled in 1986.

Watchdog groups see an echo of those dangerous erosions of freedom in the government’s moves against ABS-CBN.

“This is how liberty dies, not with a loud bang but dead air,” said human right group Free Legal Assistance Group.

Yet any impact on the nation’s institutions will come at the benefit of one man, advocates said.

“It sends a clear message: What Duterte wants, Duterte gets,” the journalist group NUJP said.

“He intends to silence the critical media and intimidate everyone else into submission.”