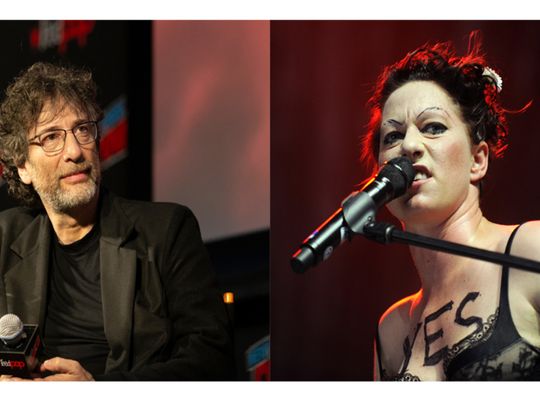 ‘Good Omens’ author Neil Gaiman and Dresden Dolls singer Amanda Palmer have split and are now living in different countries, reveals Palmer in a blog post that surprised Gaiman himself.

Palmer revealed the break-up on her Patreon page, where fans can subscribe to receive content from you.

In the public post, titled ‘where’s neil? a note about what’s happening’, Palmer claimed her “inbox is blowing up” with questions about Gaiman’s whereabouts, leading her to assume he had gone public with their separation.

“I can only gather that he’s finally told the internet he’s left New Zealand, and I thought I would come here with a short note,” wrote Palmer. “Neil moved to the UK, my heart has been broken, and I am really struggling.”

Palmer went on to write that she is “in lockdown… for the foreseeable future” with the couple’s 4-year-old child Ash and thanked people for sending her “messages of support, rage & condolences.”

The split was not due to Covid-19, claims Palmer, but “other things came up,” which she would keep private for the sake of their son.

“I see @amandapalmer has told people that we (like much of the world) are going through rocky times right now. It is true, we are. It’s really hard, and I’d like to request privacy (as I’m not going to be talking about it publicly) and kindness, for us and for Ash,” wrote Gaiman.

Palmer replied to his tweet with a link to her Patreon post. The couple got married in 2011.