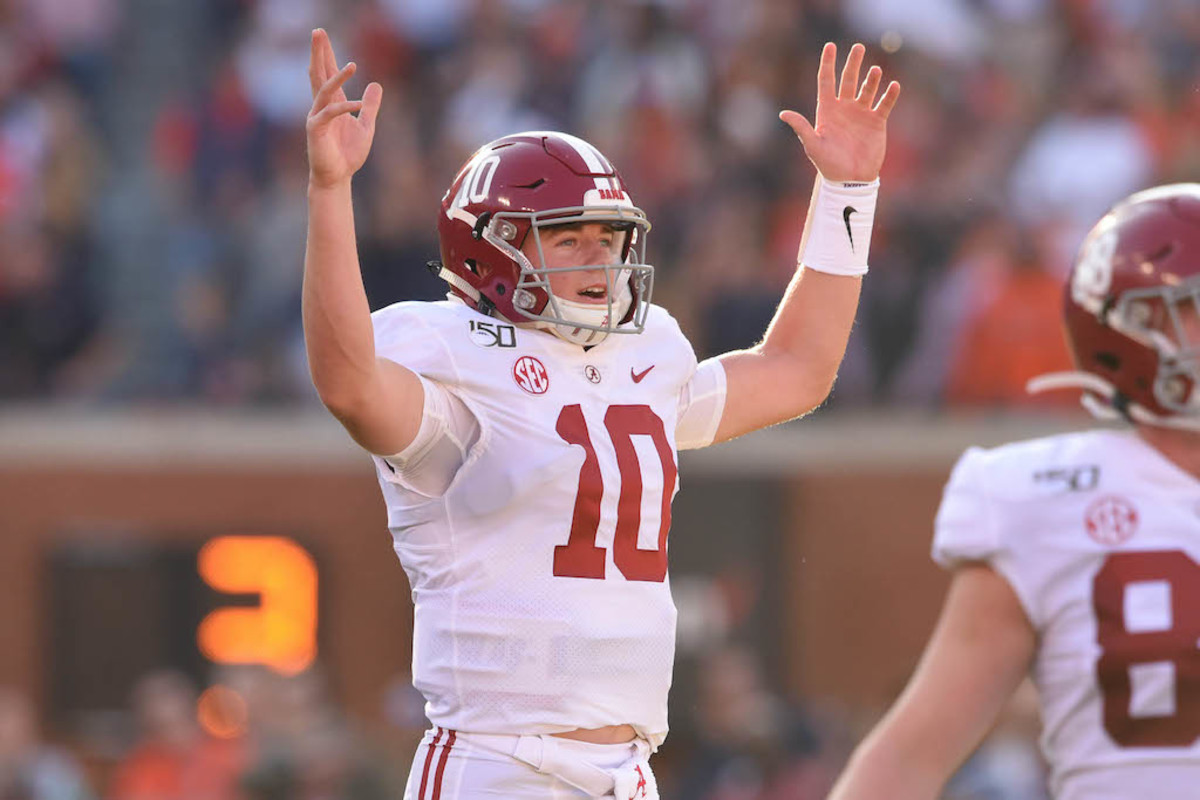 Nick Saban and the Crimson Tide have won five of the last eight SEC West titles. After the season-ending hip injury to star quarterback Tua Tagovailoa, Mac Jones showed he could run the offense at a high level. In the Citrus Bowl, the sophomore signal-caller threw for 327 yards and three touchdowns in a dominating 35-16 Alabama victory. As Bama Central reporter Christopher Walsh highlighted, “Jerry Jeudy, Henry Ruggs, DeVonta Smith and Jaylen Waddle were called possibly the best receiving group, not only in college football in 2019, but in history.” Even with Jeudy and Ruggs now in the NFL, Alabama still has tremendous talent at the wideout position in 2020.

Jones will have to hold onto the job over the summer thanks to some stiff competition behind him on the quarterback depth chart. Tua’s younger brother Taulia will be itching to ditch the clipboard entering his sophomore season, while the immensely hyped Bryce Young will also be fighting for starting job consideration. Young is the No. 1 dual-threat quarterback in the 2020 class and will definitely be in position to make an impact as a freshman.

The oddsmakers have Alabama listed with a projection of 10.5 wins juiced heavily to the over at odds of -200.

It’s no surprise that their 2020 season win total odds have them heavily favored to find themselves in position for another National Championship. The oddsmakers are begging for action from bettors that somehow the Crimson Tide will be tripped up twice in the regular season with attractive odds of +162 on the under 10.5.

Jones is likely to commence the season as the school’s starter, but should he struggle on the national stage it would not shock anyone to see Saban have a quick hook with immense arm talents standing on the sidelines. Alabama will be on notice out of the gates, when they take on USC on a neutral field and then play host to powerful Georgia in the third game of the season. However, early betting lines in Vegas have them as at least a touchdown favorite in both of those contests.

They finish the year with three straight home games, culminating in the Iron Bowl with heated in-state rival Auburn to conclude the year. Their road trip to LSU in early November does not look so daunting after seeing the defending national champions lose so much talent to the NFL, highlighted by the loss of Heisman Trophy winner Joe Burrow.

The juice on Alabama (-200) to win their division in the SEC is identical to their overall win total over’ price. After opening the season with USC, the only tough games appear to be against Georgia, Texas A&M and LSU. The oddsmakers do not see the Crimson Tide losing more than potentially one of those three games.

Alabama is a heavy favorite in yet another market. Should they advance to the SEC title game, likely against Georgia or Florida, Alabama would likely be significant chalk in the eyes of the oddsmakers and the sharps.

If you prefer Alabama’s odds of returning back to the top of the SEC in 2020, this is the market you should invest in. As opposed to laying -200 in either of the aforementioned markets, the -143 requested here is more tolerable to a manageable betting bankroll.

The oddsmakers have Alabama listed as the third-most likely squad to be a playoff team in 2020 behind only Clemson (-670) and Ohio State (-230). It should be noted that those three are the only schools listed in this market without plus-odds on the “Yes”. Since we know that the SEC Champion has made the CFB Playoff every year, it makes zero fiscal sense to lay -182 here to make the playoffs when you can lay -143 to win the SEC Championship.

As we have previously highlighted here at SI Gambling, Alabama currently has three players listed in Heisman Trophy Odds at William Hill: quarterback Mac Jones (22/1), running back Najee Harris (50/1) and wide receiver WR Jaylen Waddle (50/1). Some books even list big-play wide receiver DeVonta Smith at odds of 125/1. Bettors come away from that listing informed that Alabama is projected to have the pieces in place to potentially have arguably one of the best offenses in the country if they get consistent play at the quarterback position from Jones or perhaps even Young.

After diving in deeper I believe it’s fair to land on a 2020 projection of an 11-1 or 10-2 SU record. I do not believe odds of 4/1 to win the College Football Playoff offers enough value to attract a wager due to both Clemson and Ohio State possessing more experienced signal callers under center. Winning the SEC Championship (-143) appears to be the only way I can endorse investing wagering capital on futures involving the Crimson Tide in 2020.