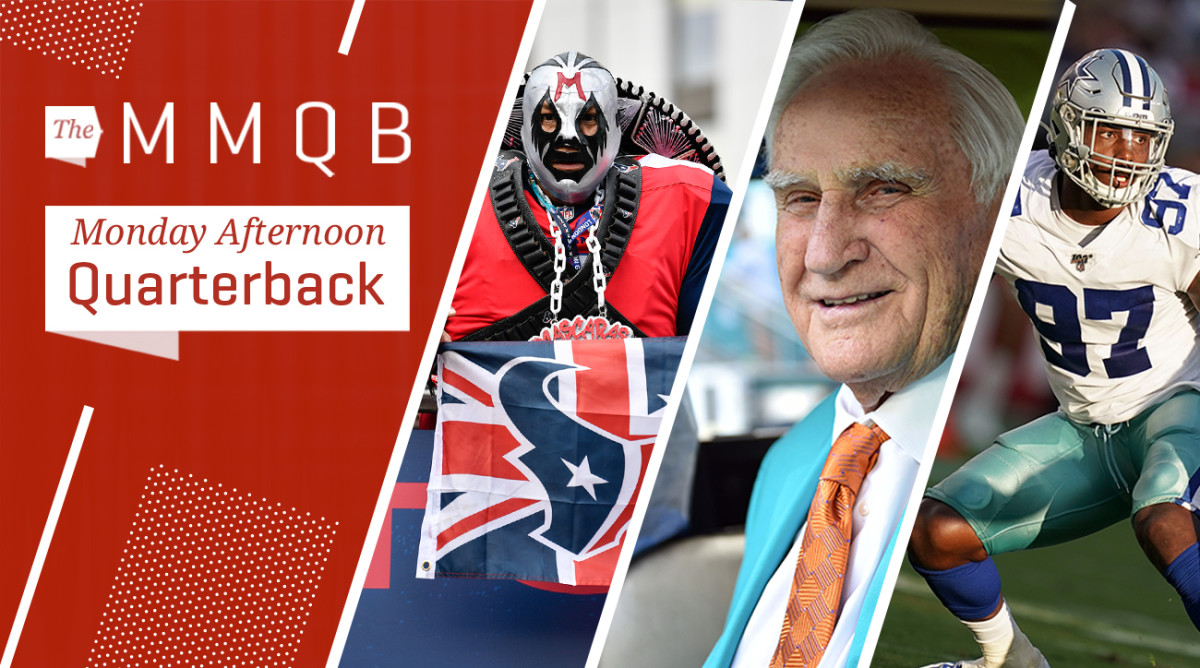 The schedule release is coming, pandemic or no pandemic …

• We got our answer on Monday on the International Series, with those five games brought back stateside, as expected. One of the primary reasons why is really interesting—and sheds some light into the NFL’s planning for the fall. As the league worked with London mayor Sadiq Khan, and officials from Wembley and Tottenham Hotspur in the UK, and Televisa in Mexico, the differences in circumstances from country to country became apparent. As part of returning to the field in the fall, the NFL plans to implement strict protocols at its stadiums, I’m told, and it was clear in talks that it was going to be hard to impose the same ones internationally at venues that would only be hosting a game or two. Of course, the bigger reasons center on how problematic sending hundreds of people to and from foreign countries is at this juncture. But it’s at least notable that the protocols that are being planned are stringent enough to have played a role in scuttling those dates.

• As for where the NFL’s going internationally, the league is under contract to play at least two games at Wembley and two at Tottenham in 2021, and the two-year deal the NFL just did to play in Mexico City will roll over, and be effective for 2021 and ’22 (provided things get back to a relative normal). All that said, the teams that go next year may not be the same as the ones slated to go this year. The Jaguars were set to play two games at Wembley, and are under contract to go again in 2021. But whether or not the Falcons or Dolphins have home dates in the UK in 2021, as they were set to this year, or the Cardinals play in Mexico in 2021, as they were set to this year, remains to be seen.

• I don’t have many great Don Shula stories, other than just seeing over the years how reverential everyone in the Dolphins organization was toward him. It also struck me, for one reason or the other, the impact he had on football in that state. I looked on Monday afternoon, and saw that 17 of the top 100 high school football recruits in America in the Class of 2020 hail from there—reflective of how the sport has become king there, and how the state has become a hotbed. And it sure wasn’t like Florida was Texas or Ohio when Shula got to the Dolphins in 1970. His early teams helped popularize the sport there, and I have to think it had an impact on the kids there, and the college programs that became powerhouses at Florida, Florida State and Miami, and even the NFL’s decisions to expand again there in 1976 and 1995. By the time I started watching pro football, Dan Marino was Shula’s quarterback and the end was in sight. But I think about my childhood, and the Seminoles, Hurricanes and Gators, and the league’s move to plant its flag in Jacksonville, and it’s clear his impact was everywhere. Even at the movies (people my age know what I’m referencing). RIP, Coach.

• One thing I should’ve emphasized even more in my 49ers lede from this week’s MMQB—one of the things that really helped the team navigate a tricky left tackle situation over the last two weeks was its relationship with Joe Staley. Staley’s willingness to work quietly through the logistics of his decision, and delay the announcement a bit, very much helped the team get the Trent Williams deal done, as teams like the Vikings, Bucs and Rams sniffed around the seven-time Pro Bowler.

• If I were the Bucs, and they don’t need me to tell them, I’d feel pretty good about landing Iowa’s Tristan Wirfs where I did, because Tampa wasn’t the only team considering moving up the board to grab him. The Vikings, I’m told, were another. Neither believed he’d fall far beyond the top five, and there was pretty strong buzz connecting Wirfs to the Giants at No. 4. As it is, the Bucs get a player that the Hawkeye staff, which has an incredibly strong rep for producing offensive line talent, absolutely loved. Not to be overlooked on that front: Bucs GM Jason Licht and Iowa offensive coordinator Brian Ferentz worked together in New England from 2009-11.

• The Titans hired Patriots director of college scouting Monti Ossenfort to be their new director of player personnel—further stocking what’s becoming one of the NFL’s stronger scouting staffs under GM Jon Robinson. And this is a good example of a good organization seeing opportunity to better itself and seizing. The Titans already have a strong VP of player personnel, in Ryan Cowden, and respected pro and college directors, in Brian Gardner and Jon Salge. But Robinson knew what he could add in the man that replaced him as the Patriots’ college scouting chief in 2014, so he jumped on the chance to do it. And it complements what Mike Vrabel’s doing on the coaching side, with good young guys like Arthur Smith and Shane Bowen having moved up through the ranks.

• The Patriots, of course, were prepared for this. Ex-Browns assistant GM Eliot Wolf came aboard in February, and he’s sticking around and is qualified for a significant role. The shuffling also highlights the importance of pro scouting director Dave Ziegler, who’s now the top guy under director of player personnel Nick Caserio, and would’ve been Josh McDaniels’s choice as GM in Cleveland, had McDaniels landed the Browns job.

• The final count is in on fifth-year options for 2017 first-round picks, and it’s fairly revealing. One of the 32, Panthers RB Christian McCaffrey, did a long-term extension before his team made a call on the option. Seventeen others had theirs picked up. Thirteen guys had their options declined. And one, ex-Cowboy and Dolphin Taco Charlton, was released before the option came due. What might be even tougher for Cowboys fans to swallow about the Charlton disaster is the story behind the 28th pick. There was a lot of support for T.J. Watt in the Dallas draft room on that night in 2017. Watt, as I remember it, wasn’t seen as long enough physically to fit the Cowboys’ profile. The rest, of course, is history.

• One question that was raised to me while I was reporting out the piece of the MMQB on the schedule was the issue of training camp—and when teams will actually be able to open them. Even without fans, conservatively, between the 90 players, 20 coaches, scouts, trainers, doctors and video folks, you’re probably looking at around 150 people minimum that need to be in attendance. So the question becomes will we, by late July, be in a position where all 22 states that have NFL teams are green-lighting gatherings of that size? I think there’s a good chance we get there, but it’s no certainty. And if you’re pushing that back, you might be pushing back the start of the season too.