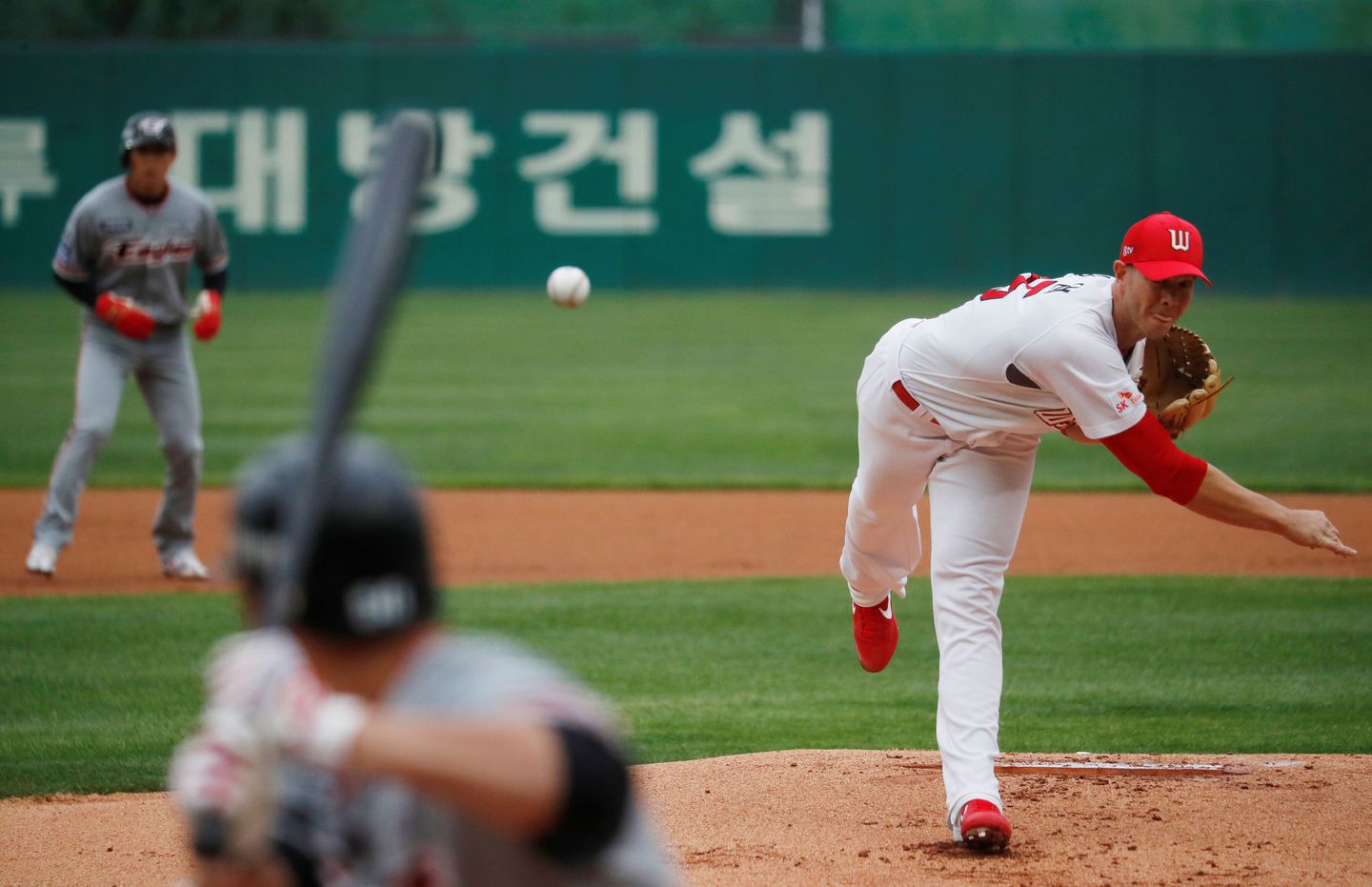 At one Opening Day game, KT Wiz hosting the Lotte Giants, the first “pitch” was not thrown at all. It was walked to home plate by a 9-year-old boy inside a plastic balloon decorated with the seams of a baseball. It was quickly dubbed the first “socially distant first pitch.”

The coronavirus pandemic has brought silence to sports stadiums around the world, including Major League Baseball in the United States. Fans eager for a sports fix have dredged up past games to re-watch or tried their best to entertain themselves with oddities such as play-by-play announcers narrating real life, such as pedestrians crossing a street.

Baseball in South Korea is also a symbol of its aggressive health policies — including widespread testing and coronavirus contact tracing — that have managed to flatten the covid-19 curve without resorting to full-scale lockdowns. South Korea reported zero domestic case of the coronavirus for a second consecutive day Tuesday.

Still, nothing in South Korea’s baseball is untouched by the virus. The season started five weeks late. Players are subject to a regime of daily temperature checks — including when waking in the morning and before leaving for the stadium.

A great catch or home run will not be followed with high-fives or handshakes. Such physical contact among players is strictly banned (except to tag a player out). No spitting is allowed in games.

Umpires and coaches are required to wear face masks and sanitary gloves in the stadium. If the league sees a coronavirus outbreak among the players, the KBO could suspend the season, depending on the size of the outbreak.

“I reaffirmed how the covid-19 prevention measures are meticulously followed at the baseball stadium,” said Seoul Mayor Park Won-soon during his visit to Jamsil stadium days before the start of the new season.

He voiced hopes for an “early return of the audience” and suggested their gradual admittance depended on the coronavirus situation in the country.

“I hope the start of professional baseball could revitalize the stagnant economy and present people with confidence and energy,” Park added.

For the moment, however, there’s a whole lot of silence at the games.

Korean baseball stadiums are usually filled with incessant chants and fan singalongs that go hand in hand with cheerleaders trying spur the mood. At Tuesday’s Opening Day games, videos of fans watching the games on TV were shown on the scoreboard.

KBO Commissioner Chung Un-chan marked the opening of the new season by crediting it to “medical workers at the forefront of covid-19 control” and “people of our country who thoroughly followed infection control guidelines.”

More sports games will make a return in South Korea amid virus slowdown in the country. The K League will begin soccer matches Friday. Next week: Women’s professional golf gets underway.