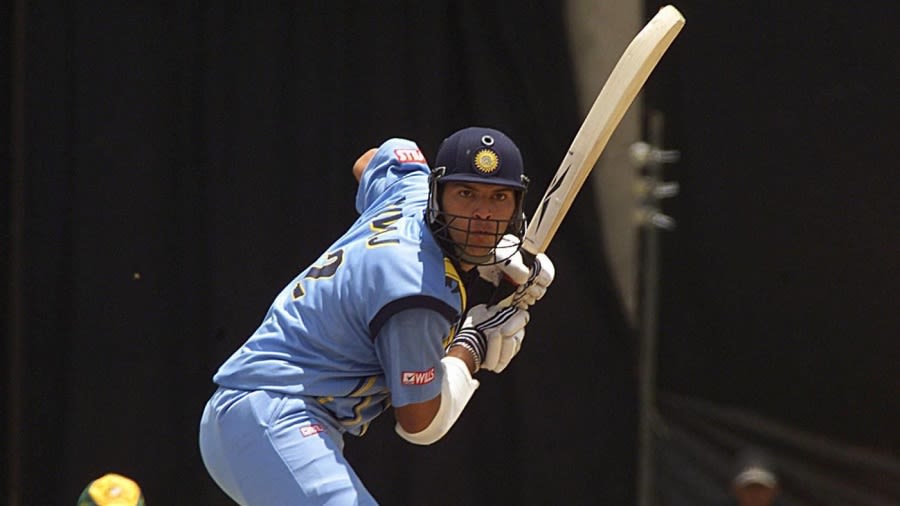 The world champions are taking an early flight home from Nairobi.

Australia had beaten India in seven straight ODIs prior to this to be the outright favourites coming into the first quarter-final of the ICC Knockouts, but a young Indian team looking to emerge from the shadows of the match-fixing scandal made quite a statement.

That it was an 18-year old Yuvraj Singh, with his gum-chewing nonchalance and elegance, and birthday boy Zaheer Khan who left their imprint on the big stage made it all the more special for India.

Had new captain Sourav Ganguly stuck to his plan of dropping down to No. 4 and opening with rookie S Sriram to lengthen the middle order, Yuvraj may have not even had the opportunity to play. But he was talked out of the idea by the senior players and Anshuman Gaekwad, the head coach, and that set the stage for Yuvraj in what was his second ODI, but the first time he got to bat in an international.

Yuvraj’s 84 off 80 stood out for many reasons. He was fearless, his ball-striking was clean, ability to pick gaps top-notch and his match-awareness – twice he was alert to possibilities of sneaking in an overthrow – allowed India the opportunity to claw back despite losing more wickets than comfortable ever since Sachin Tendulkar‘s quickfire start, where he got stuck into Glenn McGrath.

Even with Tendulkar, Ganguly and Rahul Dravid gone, Yuvraj didn’t shelve his natural game. There was a punch to his shots that made it appear as if he wasn’t nervous, the pull made multiple appearances and just his casual demeanour at the crease – not to be mistaken for laziness – gave you the impression that he had a lot of time to play hit shots. His partnerships of 40 and 64 with Vinod Kambli and Robin Singh respectively, helped arrest a middle order collapse.

But batting wasn’t his only contribution on the night. A sensational diving catch while being airborne to send back pinch hitter Ian Harvey, and a potentially game-changing direct hit to run out Michael Bevan which came on the back of Ricky Ponting’s wicket, turned the tide in India’s favour. From a comfortable 159 for 3, Australia had slipped to 163 for 5.

Bevan had pushed the ball to mid-off and instinctively took off for a single, until he saw Yuvraj swoop in and effect a direct hit at the bowler’s end to fall an inch or two short. Until then, Bevan had made an industrious 42, built around working the ball into the gaps and finding the odd boundary, making Ganguly’s task that much tougher because India needed to identify a fifth bowler.

Ganguly turned to Tendulkar for his bag of offspin, legspin and a deceptive googly, and the move paid off. Ganguly got more than he would have bargained for, because Tendulkar not only sent down seven economical overs but also managed to dismiss Ponting. All summer, nine months ago, India hadn’t come close to winning in Australia. This was their chance, but Australia still had the ice-cool Steve Waugh at the crease. Suddenly, the blazing start and the asking rate, which they were well ahead of courtesy fireworks up top from Adam Gilchrist, started to catch up.

Soon after Bevan and Ponting were dismissed, Damien Martyn was bowled off a Robin offcutter and the pressure was back on Australia. Most of the responsibility lay on Steve Waugh’s shoulders, but the bulk of the scoring from there was done by Brett Lee, who took on Anil Kumble with a six over long-off, a sweep to the fine-leg boundary and a cut to point for four to collect 15 off the 41st over.

The match was poised with Australia needing 42 off 36 and three wickets in hand, but Khan’s accurate line got rid of Steve Waugh when he made room and missed a length delivery, and Ajit Agarkar followed it with a wicket maiden that included Lee’s scalp to edge India ahead again. Jason Gillespie’s three fours off Agarkar in the 46th over gave India a scare again but he eventually handed a simple catch to Robin and India stormed into the semi-finals by stunning the world champions.