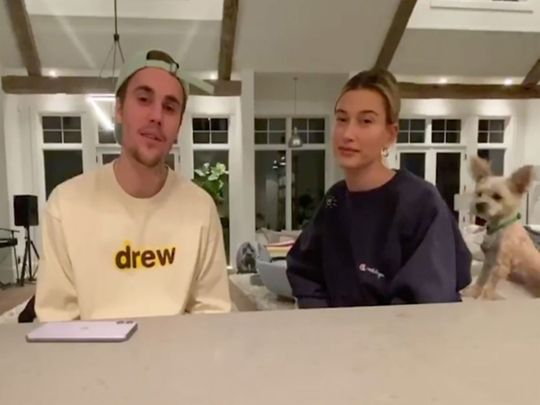 Justin and Hailey Bieber are the stars of a new self-filmed reality show ‘The Biebers on Watch’, which premiered on May 3 on Facebook — and they got candid about their relationships highest and lowest points.

The new Facebook original, shot on GoPro cameras during quarantine, gives an intimate perspective of the couple’s day-to-day adventures and their once-bumpy relationship.

“We wanted to bring you in to our journey a little bit and show you some inside scoops of what we’ve been doing,” said Justin.

Justin, 26, and Hailey, 23, took a serene boat journey around the lake they live on, while exchanging questions about the most rewarding and challenging parts of their relationship.

“The most rewarding thing about being married definitely is just the companionship that you get out of it,” said Hailey. “The more that you work on it and fight for it to be solid, it takes a lot of work, wouldn’t you say? Like, we’ve had to work hard on our relationship … You just become so connected to each other and so close. Obviously, you’re my best friend. I think that’s the biggest pay off, you have a best friend you get to do everything with.”

For Justin, the most rewarding part is making “a covenant before God to love that person for better or for worse, in sickness and in health, which is something that you’ve done amazing for me. You were there when I was really struggling and this season where I feel like I’m in the best place I’ve ever been, you and I are the closest we’ve ever been.”

The pair moved onto the more tricky parts of their relationship, including their break-up.

“There are a lot of things that I needed to work on, forgiveness things, jealousy things, insecurity,” said Justin. “I realised there were a lot of blind spots in my life that I didn’t realise that I had. That was really hard, to work through those things.”

Justin asked his wife, “How do you think you regained that trust and confidence in me? Because at the time, there was so much hurt and so much pain. What got you through that?”

“From the time that you and I ended, and not on good terms, I was on my own, essentially. I didn’t just like, throw myself into a relationship or throw myself into something else,” said Hailey. “I didn’t search for somebody to just come take place your place … and try to fill a void, in that way. I really let myself feel the emotions that I was feeling. It feels like grieving. It is grieving, actually.”

“I cared about you so much that I was like, ’It doesn’t even matter to me if he’s in my life in a romantic way … I want us to be in each other’s lives and for that to be okay,’” continued Hailey.

Before the couple got back together, their mutual friends would update Hailey on how Justin was doing and that he they were “impressed” with how he was living his life.

“There was a lot of forgiveness that you needed to have towards me, and vice versa. We both had made mistakes and I think when we understand how much God’s forgiven us and given us grace, it gives us the ability to give each other grace,” said Justin.

After rekindling their romance, the pair tied the knot on September 13, 2018.

Also in episode one of their new Facebook Watch series, Hailey called the called their ‘sanctuary’, while Bieber recalled childhood fishing memories.

“I grew up fishing for like, bass and trout,” said Justin. “I caught my first pike … I remember being so happy, because it was as big as me. My grandpa would take me. This is one of the most peaceful places.”