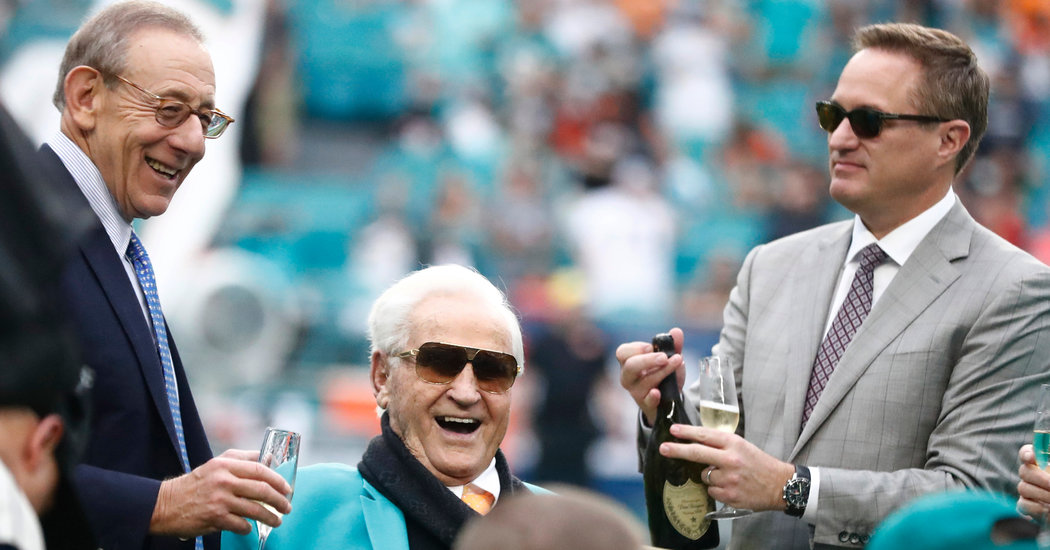 Don Shula owns some of the most hallowed records in N.F.L. history: the most wins by a coach, the most games coached, the league’s only perfect season.

Despite all the victories and accolades — Shula was inducted into the Pro Football Hall of Fame in 1997 — he was proudest of how his teams won. They were consistently among the least penalized in the league, which he considered a sign of his players’ discipline and preparation.

“I always said there was no such thing as a small mistake or insignificant error,” Shula told The New York Times in 2016. “If it happened in a critical part of the game, it could be part of the outcome of the game.”

His approach, as evident in two Super Bowl titles and all those wins, worked. For decades.

Shula, who died on Monday at 90, took over the Baltimore Colts when John F. Kennedy was president and retired from the Miami Dolphins during the Bill Clinton administration. He was the same relentless taskmaster throughout his 33 seasons as a head coach, an innovator who found ways to win with stars and unsung stalwarts, like the so-called No-Name Defense of the early 1970s. He drove his players hard in practice and demanded they prepare so thoroughly that they could adapt to any situation during games.

Then there were the workouts in the South Florida sun and humidity that every Shula-coached Dolphin can recall. Among his many ways of inflicting pain on a generation of Dolphins, Shula would have the players run a 12-minute drill around two football fields at the team’s training camp at St. Thomas University. They ran past coaches and scouts who carried stop watches, screaming out splits. The wide receivers and defensive backs had one set of targets, the linebackers and running backs another. For the linemen, the bulkiest of the bunch, the drill was pure agony.

“It was an annual ritual and if you didn’t make the target time, he’d call out your times in front of all your peers,” said Richmond Webb, an offensive tackle who broke in with Shula’s Dolphins in 1990. “He was tough, but you see the camaraderie with the guys who played in the ’70s and ’80s. He was the same guy, it seemed like.”

Shula’s teams remained competitive for decades; in his 33 years as a head coach, he had only two losing seasons, a dozen years apart. His teams made it to the playoffs 19 times, with six Super Bowl appearances.

Some of his records may be broken — the New England Patriots’ Bill Belichick is the closest active coach in wins, 43 behind Shula’s total. But Shula’s openness to change, his ability to trust talented assistant coaches, no matter their age, and his imprint on the rules of the modern game may be as important as his statistics.

Shula won with an assortment of quarterbacks. In Baltimore, he coached the great Johnny Unitas and the steady but unflashy Earl Morrall. In Miami, his Super Bowl-bound teams were led by two more Hall of Fame quarterbacks, Bob Griese and Dan Marino, but also by the unheralded David Woodley, and, during that magical 1972 season, by Morrall again.

In an era when teams rode one primary running back, Shula leaned on a trio of them — Larry Csonka, Mercury Morris and Jim Kiick — who rotated into the game based on the situation. To confuse offenses, Shula’s defensive linemen would line up like linebackers, and the linebackers like linemen.

“He won with the running game, he won with the passing game,” said Upton Bell, who was the director of player personnel with the Colts during Shula’s tenure in Baltimore. “If you put aside the records, he would go against the grain. He was willing to change because he could see the effects on the game.”

The best example came in the 1970s, when Shula’s teams were built around a formidable offensive line and a grinding running game. A member of the league’s competition committee, Shula saw that defensive backs could push and shove receivers all over the field, stifling the passing game. Though it wasn’t in the best interests of his Dolphins at the time, Shula pushed for the introduction of a five-yard penalty on defensive backs who hit receivers more than five yards from the line of scrimmage.

Within a few years, the league was dominated by pass-first offenses that have been the model ever since. And one of the most celebrated pass-first offenses appeared in Miami, where Dan Marino became the first quarterback to throw for 5,000 yards in a season. When he retired in 1999, Marino held dozens of passing records, most of which have been eclipsed.

Years later, at his home near Miami Beach, Shula spoke about the rules he helped usher in during his 26 years on the competition committee. He and Tex Schramm, the Dallas Cowboys executive who ran the committee, knew that stars were what made the game popular, especially quarterbacks. To preserve those stars, they added a penalty against defenders who hit quarterbacks from behind with their heads down.

“We wanted to make sure we kept the excitement in the game, and the big players in it,” Shula said.

He managed to do both. For decades.