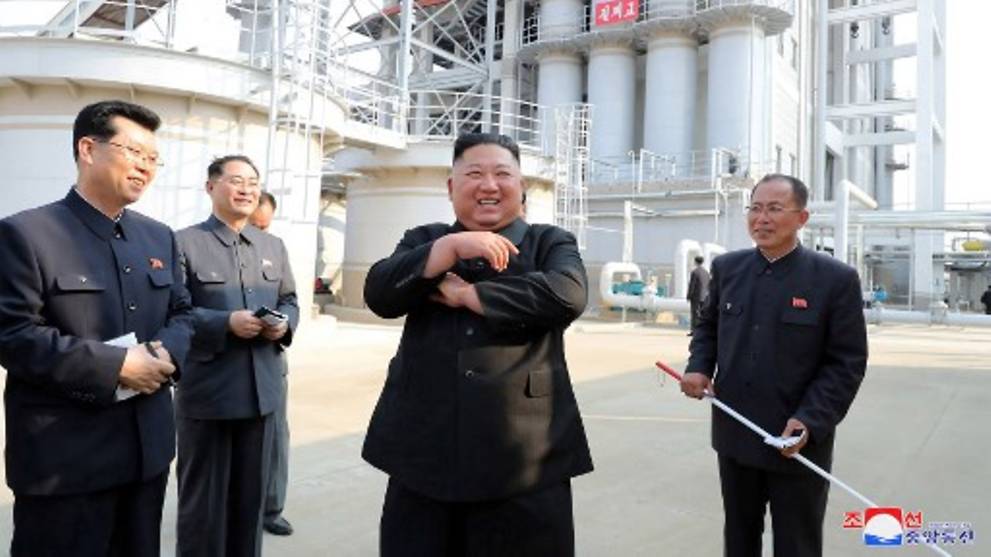 BUSAN: This week, North Korea was once again in the news, and as usual, for all the wrong reasons.

This breezy insouciance is why the world remains so suspicious of North Korea. No amount of meetings with leaders like the presidents of South Korea and the United States in the last few years will remedy this problem.

North Korea cannot “come in from the cold” until it chooses to behave better. The trust just is not there, regardless of what joint statements it signs.

The most recent causes of anxiety are the three-week disappearance of supreme leader Kim Jong Un and an exchange of fire, initiated by the North, along the demilitarised zone separating the two Koreas.

By now the strange story of Kim’s disappearance is well-known. For weeks, he was unseen in public. Rumours swirled that he was incapacitated, in a coma, dead, and so on.

CNN even said US President Donald Trump had been briefed on this. It turned out to be nothing. Kim was fine. He reappeared at a factory opening, looking to be in normal health.

South Korea sought an explanation on the inter-Korean hotline. A protest was lodged. Thankfully, no one on the South Korean side was injured.

In both instances, North Korea offered no explanation. It clarified nothing, released no formal statement, and in no other way even noted the concern among outsiders over these incidents.

They simply did not happen in the North Korean media, and it is unlikely North Korean citizens knew of either event.

This non-response is typical. Pyongyang often releases no explanations of itself or its actions. It frequently does not answer the inter-Korean hotline and disregards messages which are literally shouted across the DMZ by South Korean soldiers.

When a provocative action taken is too big to ignore, it will simply lie in the face of overwhelming evidence of culpability, as, for example, when it sank a South Korean warship in 2010 or bombed a South Korean jetliner in 1987.

This time, the denialism is not a problem. Kim reappeared and the continuity of leadership concerns expressed by the outside world became moot.

No one was injured in the exchange of fire. The South Korean media, so accustomed to these sorts of shenanigans from the North, gave them a little space but then quickly moved on.

These sorts of stories just do not move the South Korean public much anymore. No one here expects North Korea to behave responsibly, so when it does not, it is not a story.

WHY IT’S SO DIFFICULT TO ENGAGE WITH NORTH KOREA

But the typical North Korean non-response to these recent, ultimately harmless events nicely illustrates why North Korea is so isolated, why it is so difficult to engage with North Korea, even for dovish, outreach-friendly governments like that of current South Korean President Moon Jae-in.

The disappearance of the leader of a monarchy – North Korea is a family monarchy now, not a communist state – with a huge military and nuclear weapons is a major concern for countries near North Korea.

A shooting incident between countries is also, obviously, an issue of major concern. Yet North Korea felt no sense of responsibility to provide even basic information about either event.

That countries around the North might understandably be worried about leadership succession in a nuclear-armed state prompted no responsible statement from the North for weeks, not even a brief photo-op or comment that leader Kim was in fact okay.

The North Korean leadership simply does not care what the rest of us think, even as anxiety that Kim might even be dead grew.

This is, obviously, grossly irresponsible. Kim’s premature death could well spark a succession crisis. As was widely pointed out during the absence, there is no clear successor to Kim.

As a monarch, his male children are the obvious choice, but his children – to the extent we know anything about them – are too young to assume the throne.

Hence, there was much focus on Kim’s sister Kim Yo Jong. But she would be an awkward choice. North Korea is quite reactionary on gender norms; it is not clear if Pyongyang’s old guard would accept her. Hence, the fears of a power struggle.

On the other hand, perhaps there is, in fact, a succession plan worked out. Perhaps Kim has anticipated these problems and laid out a pathway. We just do not know. And that is precisely the problem.

The North simply does not accept that it lives in a social world, in a world where other states have meaningful security concerns, which even the most basic transparency could allay.

Ironically, that transparency need only be minimal – a short video of Kim walking around two weeks ago would have stopped all this – and such transparency would make it much easier to countries to trust the North and therefore take risks in bargaining with it.

In short, there are high benefits and low costs to better behavior, but Pyongyang still just will not do it. They just do not care.

The shooting incident is similar. This was likely accidental fire ordered by a local North Korean commander who has since been disciplined. The North might have owned up to it and even apologised.

The mild humiliation of that would be easily outweighed by the trust and accountability gains for the doves in Seoul who desperately want to strike a deal with the North.

Again, just a bit of transparency and honesty here would have been positive for the North. Moon could use it against conservatives and hawks trying to block his détente. But the North simply will not do that.

Again, it just does not care about the rest of us or recognise any legitimate anxiety we might have about its behavior.

This high-handedness, this refusal to admit the social world of states, that North Korea is not alone in doing whatever it wants, that it generates legitimate security externalities for other countries is ultimately the cause of its deep isolation.

Unless the North exhibits some basic sociality, rule-following, and trust-building, any deal with it will be a huge risk. Hawkish opponents will always insist the North cannot be trusted and will cheat.

Robert Kelly is Professor at the Department of Political Science and Diplomacy at Pusan National University.