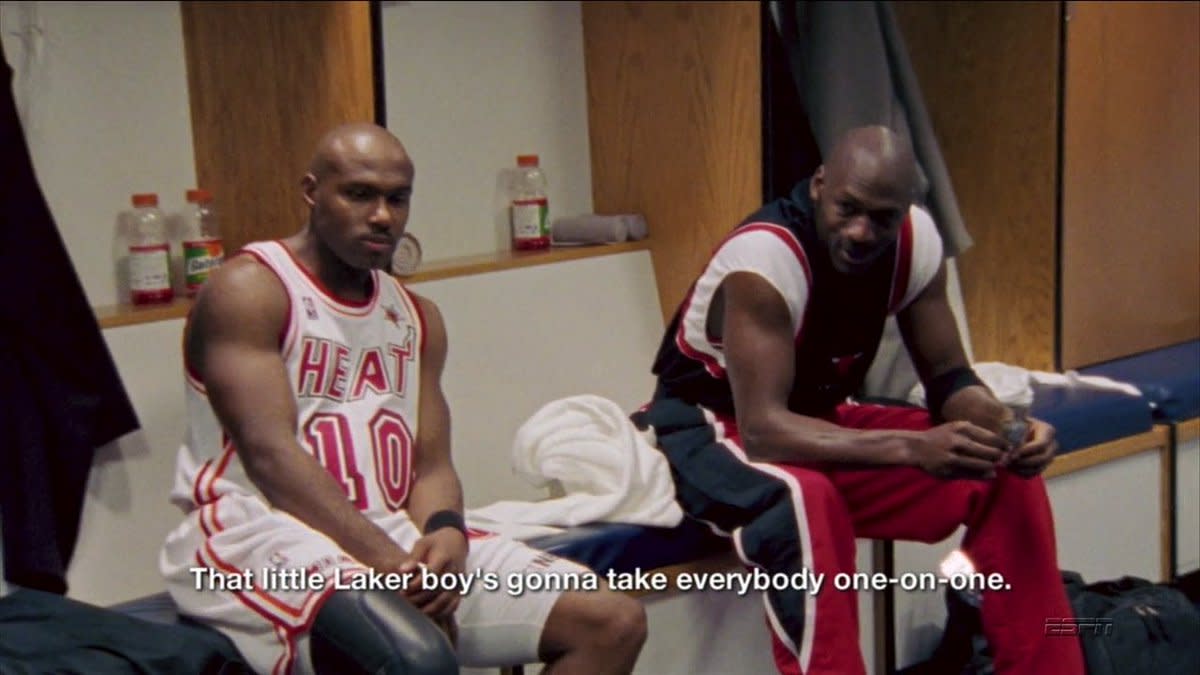 Episode 5 of The Last Dance opened with a sight that had to be jarring for NBA fans: Kobe Bryant giving a fresh interview.

Episode 4 left off with the Bulls playing their final game of the first half of the 1998 season, so it only made sense for the next installment to pick up at that year’s All-Star Game. The game would be Jordan’s final All-Star appearance as a Bull and also marked Bryant’s All-Star debut.

Kobe wasn’t even a starter for the Lakers that season (Eddie Jones was the starting shooting guard) but he was voted by the fans as an All-Star starter at the age of just 19.

In the East locker room before the game, teenage Kobe was on MJ’s mind.

“That little Laker boy’s gonna take everybody one-on-one,” Jordan said. “He don’t let the game come to him. He just go out there and take it.”

Coming from anybody else, you might interpret that as a criticism. Kobe’s ball-hogging tendencies were commonly used by his detractors as an argument against him. But Jordan was a similar sort of player, so you have to imagine he meant it as a compliment. Kobe was the youngest player in the game but he wasn’t intimidated. Jordan had to admire that.

Jason Hehir, the director of The Last Dance, said he thought it was remarkable that Kobe was on the minds of the East players before tipoff. (The All-Star Game discussion begins around the 2:10 mark in this video.)

“If you look at the young players—the Pennies and the KGs and the Grant Hills, and then the older folks who were on the court as well—it speaks volumes about Kobe and the fact that they knew this kid was a different species when he came in,” Hehir said. “Even MJ, even the GOAT, was saying, ‘He’s going to dictate the pace of this game.’”

And they were right. Kobe scored more points in the game than anybody not named Michael Jordan.

These teams likely would have ended up with NBA titles if not for MJ and the Bulls. … Private QB coaches are doing big business during the pandemic. … Umpires are the overlooked part of the baseball shutdown. … Why U.S. Soccer won its legal battle against the USWNT.

A social distancing modification on a golf course cost Jordan Speith a hole in one. … Albert Pujols’s contract is up after this season but he’s not ready to say it’ll be the end of his career. … ESPN started airing The Last Dance before all the installments had been completed.

This guy had the best job in the world

MJ had the Bulls-colored Range Rover with custom plates

He’s not just a superhuman on TV

I’d rather be facing Mike Trout with the bases loaded

This’ll take some getting used to

This guy is off to an absurd start

John Cena fulfilled yet another sick child’s wish with a surprise visit at the home of a seven-year-old battling a rare cancer. … The Asian “murder hornets” invading the U.S. for the first time are just as scary as the name makes them sound. … A man got caught camping at Disney World, which he described as a “tropical paradise.”

My hair is going to be this long pretty soon