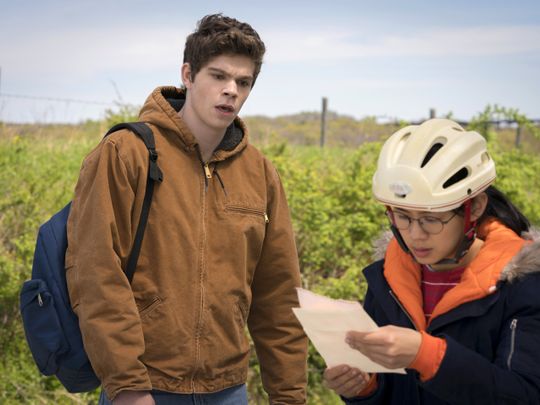 For filmmaker Alice Wu, romance is a gauntlet to be run, a portal through which we experience the pain and embarrassment necessary to teach us what love is.

Wu’s second feature ‘The Half of It’, a smart, sassy philosophical treatise dressed up like a Hughesian high school riff on “Cyrano de Bergerac,” tells us exactly what it is in an opening animated bit and then proceeds to charm as it upends our expectations.

Though shot along the Hudson River in New York state, the film is set in the Pacific Northwest-flavoured town of Squahamish, one of those fictional idyllic movie burghs where everyone wants to escape but rarely does. It is here where Wu begins her movie magic, juxtaposing our cinematic assumptions of such places with the deeper emotions with which she invests her characters. There is also the real sense that this world extends far beyond the camera’s frame.

The heroine is Ellie Chu, a high school senior, played with controlled ferocity by Leah Lewis. An introvert’s introvert, Ellie is both a dutiful daughter and the town’s silent iconoclast. The Chus immigrated to the US from China when Ellie was very young. Now, she cares for her grieving father after the death of her mother four or five years earlier, and continues his work as the town’s station master when the train passes through twice daily.

To make ends meet, Ellie writes term papers for her presumably better-off classmates with the full knowledge of their English teacher, Mrs Geselschap (Becky Ann Baker), a plucky burnout who would prefer not to read the drivel her students would otherwise submit. It is Mrs Geselschap — there must be a real-life counterpart because she is thanked in the credits — who nudges Ellie to look into the future and imagine something brighter.

Ellie’s entrepreneurial actions attract the attention of Paul Munsky (Daniel Diemer), a prototypical dim-bulb jock gifted by Wu with the distinctive traits of being the second-string tight end on a football team that hasn’t scored in 15 years, an artisanal sausage-maker and the film’s emotional savant (more than embodied by Diemer).

Paul has a major crush on Aster Flores (Alexxis Lemire), the pious and artistic daughter of a deacon, and asks Ellie to pen a love letter, which she initially declines to do.

Money troubles, however, force Ellie into the Cyrano role and soon she is performing a beguiling multiplatform duet of words with Aster on Paul’s behalf. Lewis and Lemire are delightful in creating the requisite sparks. And as with Rostand, things get complicated.

Throughout those complications, Wu deftly juggles a lot of varied elements. The deeply authentic character scenes that resonate beyond the movie’s running time share space with broad set pieces drawn from a myriad of teen movies that Wu both leans into and affectionately satirises.

The spectre of those films is balanced by the classic movies (including ‘Casablanca’, ‘The Philadelphia Story’ and ‘Wings of Desire’) Ellie watches with her father that cast a thematic glow over the proceedings. Underlying it all are the issues of identity — ethnic, sexual, gender, socioeconomic and religious — that inhabit the film’s DNA without overwhelming the storytelling.

Wu also deploys music creatively, including an original song written by Joe Pernice of the Scud Mountain Boys memorably performed by Ellie at a talent show; as well as weaving in tracks by contemporary artists such as Sharon van Etten and the Ruen Brothers alongside easy listening classics from John Denver, Gordon Lightfoot and Chicago that feel too on point until the moment they improbably sweep you away into adolescent bliss.

Ultimately, ‘The Half of It’ and its multilayered title are about the expansiveness of love, with the romantic kind being just one among equals. It’s about friendship and family, the acceptance of self and others, and the freedom to be who you are and screw up royally along the way.

Wu is confident enough to make the bold strokes her characters speak of and craft a movie that’s comfortably different. Almost 16 years after ‘Saving Face’ made her a voice to reckon with, Wu is back and we’re happy to have her.

‘The Half of It’ is streaming now on Netflix.