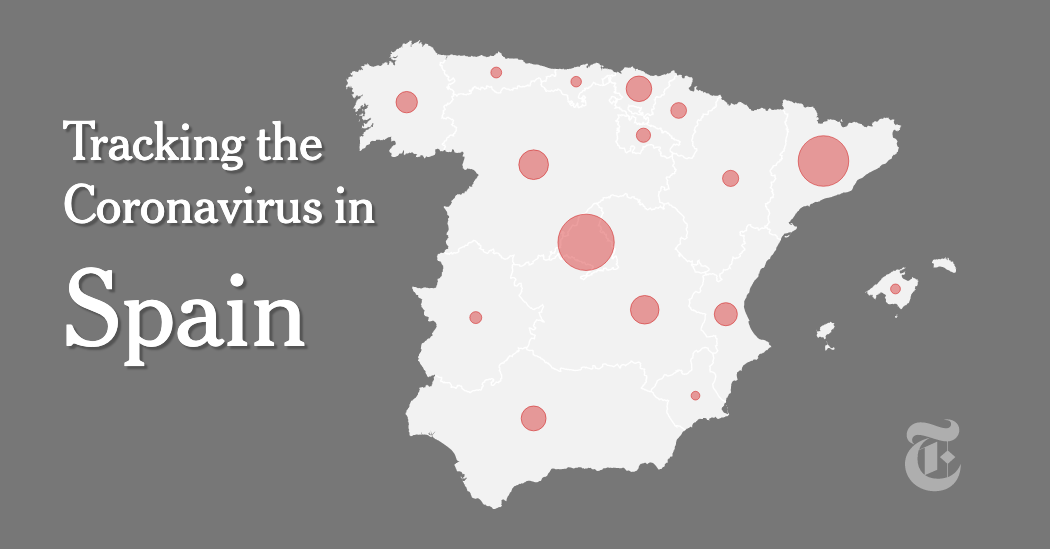 There have been at least 218,000 confirmed cases of coronavirus in Spain, according to the Spanish Ministry of Health. As of Monday evening, 25,428 people had died.

Here’s how the number of cases are growing in Spain:

Note: Detailed death data was not available for some areas.

Spanish authorities have begun to loosen the nationwide lockdown in place since mid-March, one of the world’s strictest, which only allowed people outside to walk their dogs or shop for groceries. In the last week of April, children under 14 years old were permitted to go outside for the first time in six weeks, and Prime Minister Pedro Sánchez announced a plan to return to normalcy by the end of June. As part of his plan, Prime Minister Sánchez wants Parliament to approve an extension of the current state of emergency beyond May 9, but his minority government is facing strong criticism from opposition parties for its handling of the crisis.

The coronavirus outbreak has severely damaged Spain’s image as one of the healthiest nations in the world, which has long boasted a robust universal health care system and the highest life expectancy in the European Union. The pandemic has knocked out thousands of the country’s health workers, who make up nearly 20 percent of its confirmed coronavirus cases, the highest reported share in the world. Among the grim episodes of the crisis, an ice rink in Madrid was converted into a temporary morgue, and soldiers found abandoned or dead residents in their nursing home beds.

How Cases Are Growing

Here’s how the number of new cases and deaths are changing over time:

Note: The seven-day average is the average of a day and the previous six days of data.

The New York Times has found that official tallies in the United States and in more than a dozen other countries have undercounted deaths during the coronavirus outbreak because of limited testing availability.

Spanish authorities have changed their data collection method several times since March, creating confusion over the actual number of confirmed cases in the country. On April 16, the health ministry started to include results from antibody tests in its daily tallies of confirmed cases, only to retract them a week later. Antibody tests, authorities said, don’t reflect new infections, because they “do not determine whether the person developed the disease, how long it has been since he or she has developed immunity.”

Since April 24, the tally of confirmed cases includes data obtained from PCR diagnostic tests only, which caused a drop in the number of known infections, from around 220,000 to just over 200,000.

Spain, like most countries, is only counting fatalities of those who have tested positive for coronavirus. The Madrid region and Catalonia, the country’s worst hit areas, have started to report “confirmed or suspected” coronavirus deaths provided by funeral homes in daily updates, but those updated numbers are not included in the daily death tolls published by Spain’s health ministry. The regional numbers there include deaths in nursing homes and suggest that the death toll is far higher than reported so far.

Spain has also faced an acute shortage of test kits, and has not tested those who don’t present symptoms. Over a million tests had been performed as of late April, including 40,000 a day in recent weeks, according to authorities. But Spanish news outlets have questioned such figures.

Where You Can Find More Information

Read more about Spain’s overwhelmed nursing homes, and watch how unprotected health workers, who have called themselves “health care kamikazes,” have made their own equipment. Police officers have played guitar in the streets daily, and Spainards organized elaborate Good Friday celebrations from their balconies.

Here is where you can find more detailed information: