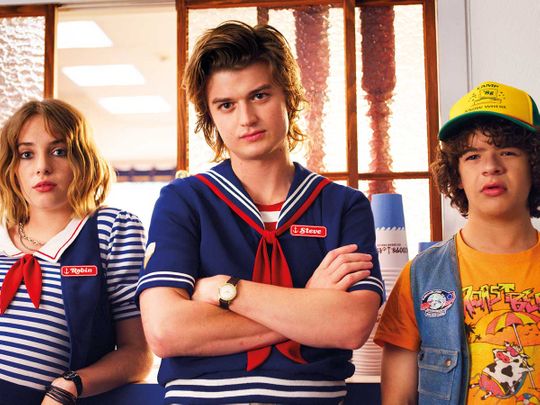 ‘Stranger Things’ star Joe Keery, popular for essaying the role of Steve Harrington, says the upcoming fourth season of the hit series will be “darker, scarier and pretty amazing”.

At the moment, the production of the Netflix series is on hold due to the coronavirus pandemic. In an interview to Total Film, Keery assured fans that the wait will be worth it, reports digitalspy.com.

“Oh man, it’s pretty amazing the Duffer brothers have really done it again. I think that this year and I know I say this every single year but this is definitely going to be a lot scarier than prior years, because last year was pretty dark,” Keery said.

The 28-year-old actor added that he will no longer be seen wearing his iconic Scoops Ahoy outfit from season three.

“I know that costume served its purpose and I’m glad to retire it,” Keery said.

“Do I have it at home for Halloween? I don’t, unfortunately. They won’t let me have that one. One day,” he added.

Meanwhile, his ‘Stranger Things’ co-star actor David Harbour recently shared that the fourth season was eyeing for an early 2021 release before the shutdown. He said the new episodes were “supposed to come out early next year, I think, although I don’t have authority on this”, adding that due to the pandemic it would “probably be pushed back”.

Back in 2016, The Duffer Brothers brought the science-fiction horror drama alive, with a bonanza of nostalgic 1970s and 1980s references. Created by Matt and Ross Duffer, the horror show is set in the fictional town of Hawkins. It follows the story of four friends Will (Noah Schnapp), Mike (Finn Wolfhard), Dustin (Gaten Matarazzo), Lucas (Caleb McLaughlin) as they form an unlikely alliance with Eleven (Millie Bobby Brown) to save their town from alien invasion.