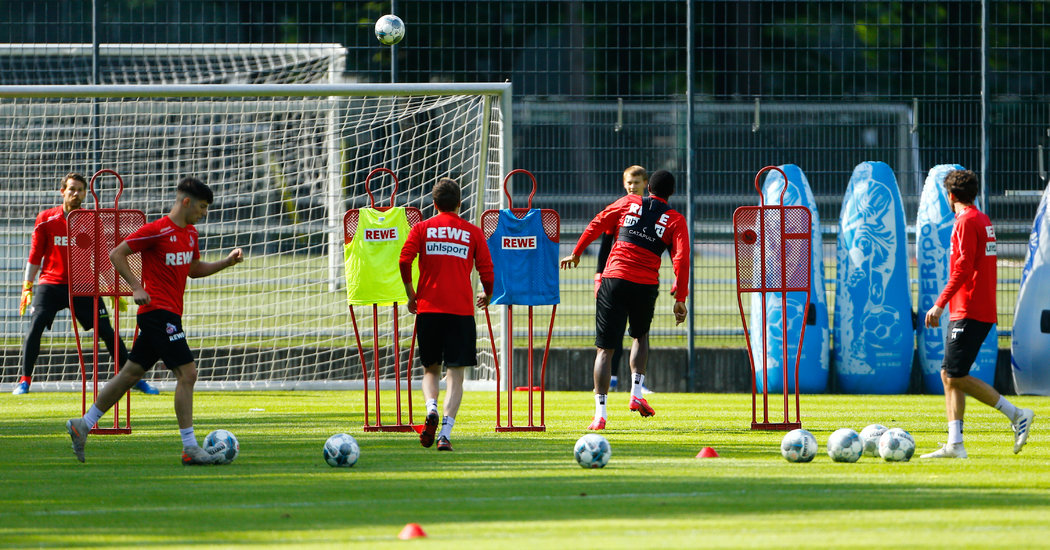 LONDON — As one of the first major sports leagues to detail plans to return to action, Germany’s soccer league has become the bellwether for the thorny task of restarting sports events postponed by the coronavirus epidemic.

That decision became more complicated on Monday when 10 players were found to have the virus after blanket testing of 1,724 individuals from the 36 teams in the top two divisions of the league, the Bundesliga.

It was not clear if the results would derail plans to restart the league, a decision that could come on Wednesday. But the test results were seen as a harbinger for the heavy considerations all sports organizations would face as they make reopening plans, many of them contingent on widespread testing.

Should the decision to reopen go against the Bundesliga, which has warned of financial catastrophe in the event of the season’s not being allowed to reach its conclusion, doubt would be cast upon being able to reopen competitions in the rest of the soccer world and beyond, given Germany’s relative success in dealing with the health crisis. Germany has one of the lowest death rates among major countries and has been lauded for its testing regimen.

The majority of individuals who tested positive are believed to be asymptomatic, including all three from F.C. Cologne, which confirmed three cases on Friday. The number of positive tests represents a fraction of those tested, 0.4 percent of the testing pool, lower than estimates for the population at large. The affected individuals have been isolated and will remain so until they are free of the virus.

The Bundesliga was forced to issue another statement later Monday after a forward for the Hertha Berlin team, Salomon Kalou, posted a video — which he later deleted — on social media in which he appeared to have disregarded social distancing rules by shaking hands with teammates and even interrupting a coronavirus test.

“The pictures from Salomon Kalou from the changing room of Hertha are completely unacceptable,” the league said. “There cannot be any tolerance for this, also with regard to the players and clubs who are adhering to the guidelines, because they have grasped the seriousness of the situation.”

For several weeks, Bundesliga teams have been back at their training grounds readying for a possible return. But practice has so far been limited to groups of five players, at most, carrying out drills while respecting social distancing rules. That has made for the sight of players performing strange workouts, moving up and down the field without the hint of contact.

The league’s 51-page reopening plan calls for games to take place at stadiums with biological controls similar to those required by medical facilities. The games would take place without spectators, a frustrating but essential measure that is likely to remain in place at least until the start of next year.

F.C. Cologne’s three positive tests were among the 10 identified by the Bundesliga, which did not provide any other identifiable details. The league, in a statement on its website, said a second wave of tests would be carried out this week.

In Germany, the possibility of Bundesliga’s return has not been universally popular, with some politicians speaking out about what they perceive as preferential treatment for millionaire soccer players while the rest of society remains largely closed in.

For league officials, the need to reopen is existential. In an interview with The New York Times last month, the Bundesliga’s chief executive, Christian Seifert, said abandoning the season would be ruinous. He estimated that the losses would be 750 million euros, or just over $815 million, and lead to an immediate financial crisis at about one in three teams in the top two divisions.

Government officials have been treading a fine line between giving full-throated endorsements to the league’s plans while not being seen as prioritizing its return during a national crisis.

Over the weekend, the interior minister, Horst Seehofer, said he found it “plausible” for the league to restart in May before adding, in comments published by Germany’s Bild newspaper, that “there should be no extra privileges for the league.”

Germany has started to ease some restrictions on businesses. On Monday, for instance, hair salons, which had been shuttered for six weeks, were allowed to reopen under strict conditions.

Polls carried out in Germany suggest there is an appetite for soccer’s return, though some of the most ardent supporters oppose its coming back while fans are still under stay-at-home orders.

“The resumption of football, even behind closed doors, is not acceptable in the current situation,” Fanszenen Deutschlands, a nationwide organization representing fan groups, said in a statement last month. “Professional football is already sick enough and belongs in quarantine.”

Under the proposals, players can live either in team hotels or at home, but they are barred from having sex if they or their partner are suspected of having symptoms. The maximum number of people permitted in stadiums would be 300 people, including team personnel, security officers and journalists.

Players will be required to drive to home games. For road games, they will be grouped onto buses, to maintain social distancing. The buses will be disinfected before and after each use. Once inside stadiums, players in the starting 11 will be kept apart from the substitutes, including for pregame meals and warm-ups. They will also be required to dress in several locker rooms and shower individually.

Two testing phases are mandatory before the possibility of collective team training at closed training camps as part of protocols signed off by the ministry of labor that also require the agreement of Germany’s 16 regional governments. Following those discussions, the Bundesliga also agreed to voluntary testing for players’ families. Two tests per week will take place should clubs be cleared for group training and games.

“The tests carried out in the past few days have served their purpose of providing additional security and thus protecting the players as best as possible from infection in team training or game operations,” the Bundesliga said Monday. “In the coming weeks and months, it will continue to be a matter of consistently implementing the agreed measures in everyday club life as well as in the private sphere. In the event of positive test results, the decision about the measures to be taken lies with the local health authorities.”

England’s Premier League is expected to decide on Friday whether there is a way forward to reopen amid disharmony among its 20 teams. In Spain and Italy, there are also cautious moves toward playing again. (Spanish players returned to training on Monday, where they were limited to working out alone.)

Elsewhere, that option has been ruled out, most notably in France, where last week the prime minister declared the season over. The seasons in the Netherlands and in Belgium have also been officially called off.