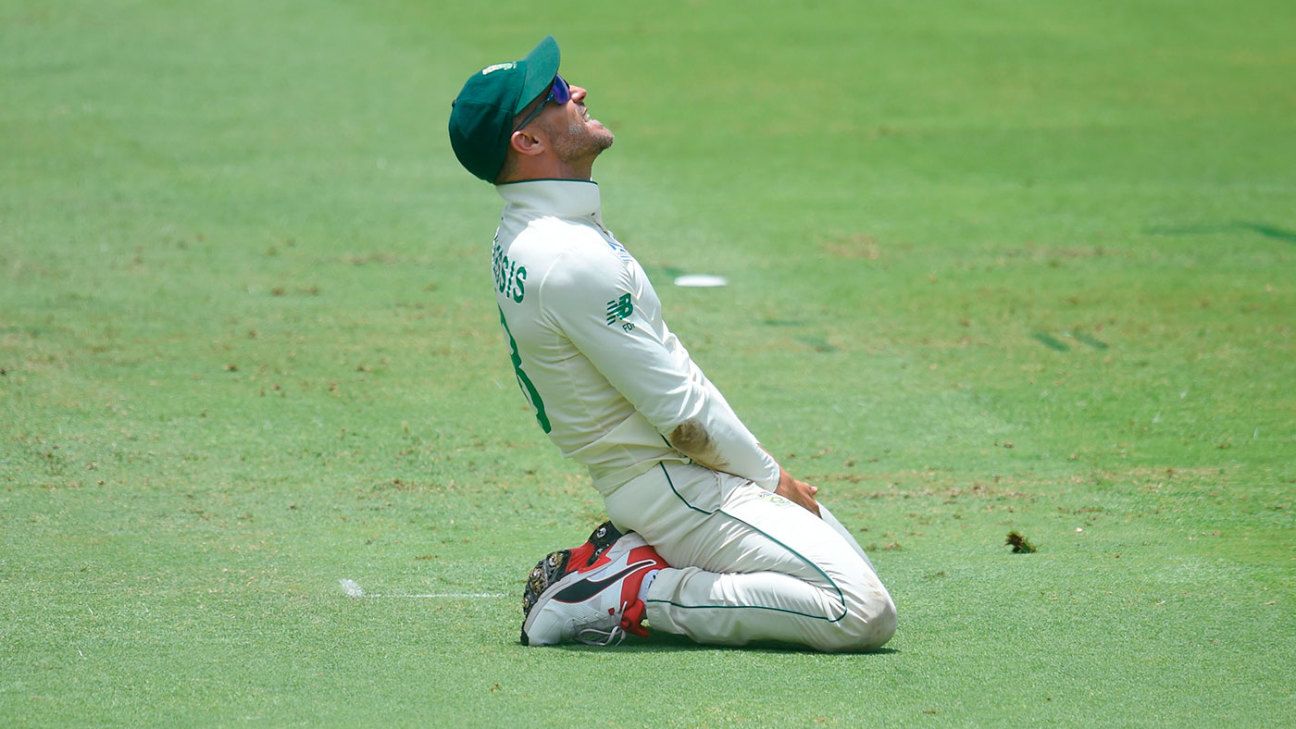 Faf du Plessis stepped down as South Africa’s captain after “one of the toughest seasons” of his career to concentrate on developing future leaders, an area he believes his country needs to work on. In his first media engagement since the end of the 2019-20 home summer, du Plessis explained that while he remains committed to playing in all formats, after the 1-3 Test series defeat to England, he thought the time was right for someone else to take over.

Du Plessis stood down this February, after Quinton de Kock had been named ODI captain and filled in during the T20s against England as well while du Plessis was rested. Although he had indicated his intention to take South Africa to the World Cup later this year, du Plessis gave up both the T20 and Test captaincy, having averaged just 18.87 in eight innings in the Tests against England.

“The season gone by is probably one of the toughest of my career because it had a lot of elements to it that wasn’t just cricket,” du Plessis said. “The team didn’t do well again and then the pressure really started pointing towards me and a lot of energy was pushed towards me. I just felt at the time that I had been fighting the good fight for the Proteas and I gave it absolutely my everything. On reflection after the Test series, I went away and that was when I thought it was the right time [to step down].”

Du Plessis opted not to retire, or sign a deal to play abroad, because he believed he still had plenty to offer his successor. “I felt that with a new coaching staff they could start with someone new, but also that I have a lot of value to add to that. I thought the time is right now to fast track that process [of blooding a new captain], which is why I took the decision to step away.”

Du Plessis ended up playing only one of the four series that de Kock led the team – a T20 rubber against Australia – but remains available for selection and intends to continue assisting both de Kock and the-yet-to-be-named Test captain. Du Plessis’ rationale is that South Africa do not have a history of mentoring leadership candidates and end up throwing new captains in at the deep end.

ALSO READ: David Miller Interview: ‘I don’t have to be captain to take on a leadership role for South Africa’

That is what had happened with current director of cricket Graeme Smith, who was 22 when he was appointed. Smith has indicated he may take a similar chance on the next Test captain, who may not necessarily need to have a wealth of experience to take over. Du Plessis would like that person to feel supported and have someone like himself to turn to for advice if needed.

“I’ve captained in all formats since the age of 13 and I’ve always looked at myself as a leader before a player. I enjoy that more than anything else so I will always miss it”

“Something that’s very much part of our culture is that we don’t ask for help too often. We want to act like we’ve got it all figured out. This is a real opportunity for us to look at that and say, ‘Ok guys, how can we grow the group?'” du Plessis said.

“There are a lot of guys that are in a similar boat. They’ve maybe played a bit of cricket but are relatively young in terms of leadership in their own roles and not a lot of guys have captained a lot of games. It’s a great opportunity for three, four, five or six guys to come together and to start building themselves and each other to create a leadership group within the Proteas that will drive the culture for the next three or four years. There’s a huge opportunity there and I would like to be part of it.”

At the same time, du Plessis has given up the role he enjoys most but hopes to be able to use the skills he gained as a captain to teach others. “Do I miss captaining? Of course I do. I love captaincy. It’s a part of who I am,” he said. “I’ve captained in all formats since the age of 13 and I’ve always looked at myself as a leader before a player. I enjoy that more than anything else so I will always miss it but I do think the time is right for me to move on to what will be a position of growing other leaders. This is something I have looked at as my real purpose in the next year for the Proteas – to really get stuck in and grow guys and share my experience [that] I have gained.”

All that means that du Plessis intends to remain in the South African system, and the enforced break from the game as a result of the coronavirus pandemic has helped him rediscover his passion for playing. “This time away from the game has for me shown the hunger is still there. That’s a big thing for players – to really still love what they do and I do love playing for the Proteas. That’s a good positive.”