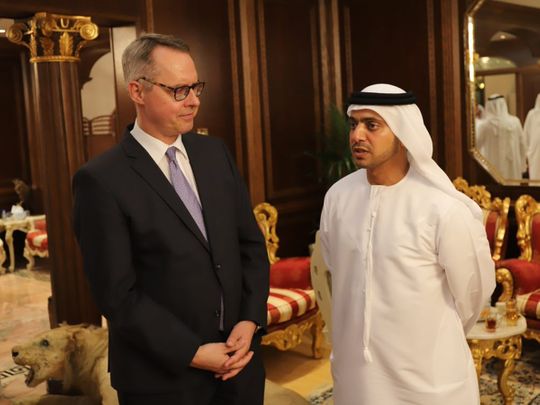 In February 2020, Dr Hamed Al Suwaidi, chairman and founder of the Abu Dhabi Art Society (ADAS), became patron and sponsor of magnificent pieces of historical art in Hanover, Germany. He now sponsors the Kupferstiches der Gesamtansicht von Hannover, a copper engraving work of art depicting a detailed view of the city of Hannover in 1729. This artwork can now be viewed at the Museum Schloss Herrenhausen. This palace was the summer residence of the Royal House of Hanover. Almost completely destroyed in WWII and re-opened in 2013, this splendid palace was rebuilt on its original site, implementing modern amenities with original plans.

Dr Al Suwaidi took a special interest in the historic art from the Saxonian city of Hanover. Founded in the Middle Ages, Hanover become one of Germany’s leading industrial cities, specialising in world fairs, magnificent gardens and fabulously restored architecture. Hanover is currently expanding its artistic scene, renovating some of its most beautiful museums and oldest structures.

He explained, “I saw the opportunity to support this effort and began building cultural bridges for an enriching exchange between ADAS and some of the museums and original historical structures of this ancient city surrounded by UNESCO World Heritage sites”.

His other patronage can be found in the oldest part of the city. The Beginenturm is one of city’s oldest intact structures, first mentioned around the 14th century It is a part of the original city wall. It was ingeniously attached to the 1960’s building housing the Historical Museum. The Stufen (steps) of this medieval tower, now receive generous support from its sponsors.

The managing director of the Friends of the Historischen Museums e.V., Ms Barbara Koch, explained that she was very pleased and thankful for the call from Dr Al Suwaidi and for his support. She said, “We are pleased that you have become aware of the association. On behalf of the association, I would like to thank Dr Hamed Al Suwaidi.”

Mr Frank Scherrer, chairman of the board of directors at the Historical Museums of Hanover, and Professor Thomas Schark, director of the museums for the Cultural History of Hanover, also thanked Dr Al Suwaidi for his support and sponsorship of these exquisite Hanover historical pieces.

Dr Hamed Bin Mohamed Khalifa Al Suwaidi was born in Abu Dhabi, United Arab Emirates, into an eminent, culture and arts oriented Emirati family with profound influence over the development and growth of the country. With strong family roots in trading, business, and state policy, Dr Al Suwaidi carried forward the task of growing the family brand with connections across borders, particularly between the UAE and the UK.

Dr Al Suwaidi began his career with the National Bank of Abu Dhabi (NBAD) in 2004, where he served as the executive director of gulf and international and deputy regional CEO – Gulf and Africa for 14 years. He then served as the Regional CEO Middle East & Africa until September 2017, where he had contributed to the merger and integration of National Bank of Abu Dhabi and the First Gulf Bank into First Abu Dhabi Bank (FAB), which has become the largest Bank in the Middle East and North Africa.

Along with his success in the banking industry, Dr Al Suwaidi expanded his vision for his life’s work and started managing a portfolio of asset management in real estate and financial investments in addition to household operations.

In 2010, he was appointed as vice chairman and managing director of Bin Yousef Group, which is founded and fully owned by his father, H.E. Mohamed Khalifa Bin Yousef Al Suwaidi, a holding group active in multiple sectors including financial investments, asset management, real estate, shipping, travel, and entertainment. Dr Al Suwaidi is currently the Chairman of AES Limited Abu Dhabi – a company with UK representation focused on trade, education and arts. Dr Al Suwaidi is also an Executive Director of the board and the managing director to the Five Island Capital LLC.

Dr Al Suwaidi has also greatly contributed in strengthening the joint relationship between the UK and the UAE and is one of the initial founders of the UK – UAE Year of Culture, which was announced in November 2016 by His Highness Sheikh Mohammed bin Zayed Al Nahyan, Crown Prince and Deputy Supreme Commander of the UAE Armed Forces, and HRH Prince Charles, The Prince of Wales – The Patron of UK – UAE Year of Culture. He has led multiple delegations representing the United Arab Emirates in relation to strengthening economic relations and exploring potential Emirati opportunities for investments and developments.