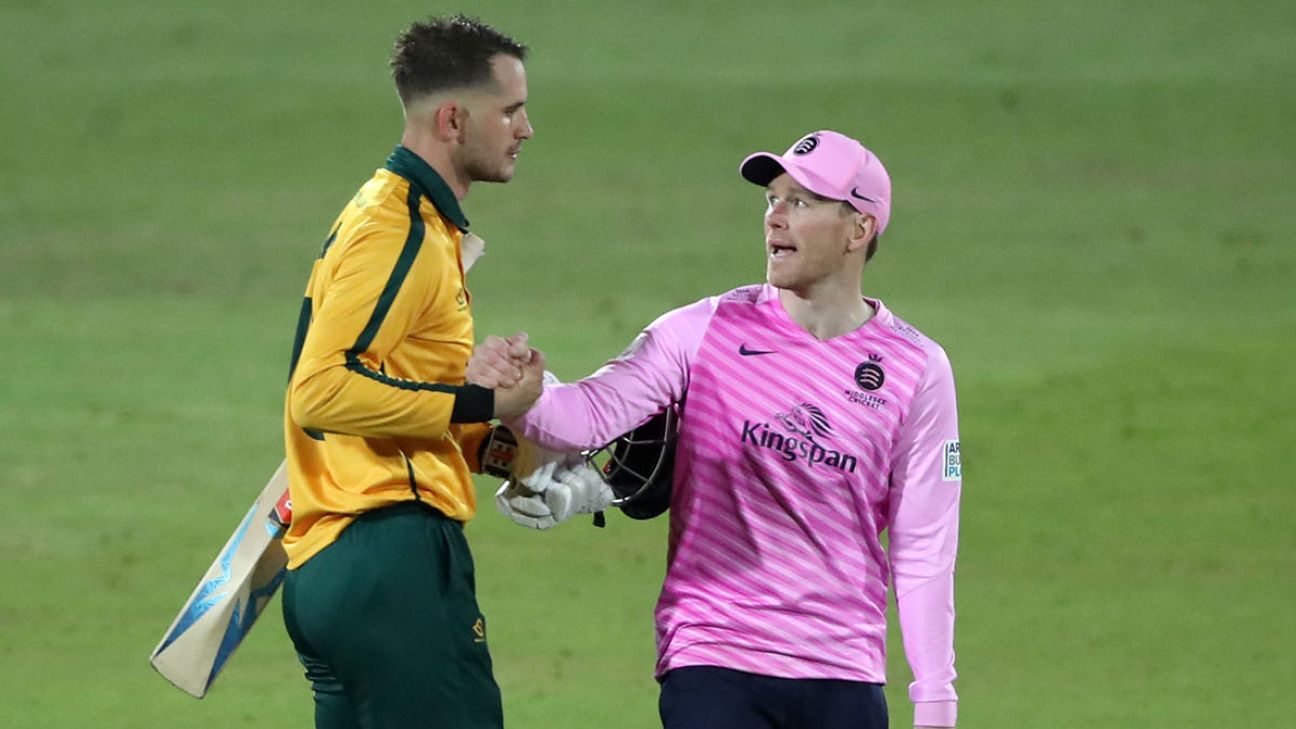 Eoin Morgan, England’s white-ball captain, says the “door is still open” for Alex Hales to earn a recall to the T20 World Cup squad, but only if he can rebuild the trust that was lost when he was axed from last summer’s 50-over World Cup squad for failing a second test for recreational drug use.

Prior to his fall from grace, Hales was a member of the England side that reached the final of the last T20 World Cup, in India in 2016, and had been a key player throughout the 50-over team’s rise from ignominy after the 2015 World Cup – including a then-record 171 against Pakistan in 2016 and another century in England’s world-record 481 for 6 against Australia two years later.

Having previously stated that he was targeting an England return for the 20-over World Cup in October and November, Hales demonstrated his enduring value as a T20 batsman with impressive stints for Sydney Thunder in the Big Bash and Karachi Kings in the PSL prior to the Covid-19 outbreak.

However, he has not been considered for England selection since March 2019, and speaking at the launch of the Abu Dhabi T10, which is scheduled to take place after the T20 World Cup in November, Morgan reiterated that Hales would be required to rebuild that lost trust before he could be included in any future international plans.

“In terms of what that looks like, practically, it’s human nature, it’s about developing trust,” Morgan said. “I don’t think you can put a time limit on gaining back that trust, and that’s not just with me, that’s with every member of the squad, the backroom staff, the selectors.

“And that does take time. We’re in May, so it’s 11 months ago that the incident happened with Alex, so it’s actually not that long ago that it happened.

“What happened was actually quite considerably harmful to the environment, which obviously led to the breakdown in trust between Alex and our players, so to say, how long that will take to regain, we don’t know, but certainly the door is still open for that trust to be built back up.”

Hales’ hopes, however, are likely to be hit by the lack of opportunity to impress in the build-up to the tournament.

The ECB have been in discussions in recent weeks with the government and other sports over the feasibility of events taking place in bio-secure environments, and on Tuesday Tom Harrison, the chief executive, will appear before the Department of Culture, Media and Sport select committee to discuss the board’s findings.

Morgan added that England’s players were due to be briefed by the ECB later on Monday, to be brought up to speed with the latest developments.

But, with the season already postponed until July 1 at the earliest, he conceded that the ECB was likely to prioritise its two Test series against West Indies and Pakistan, and that his white-ball squad may have to “make do” with whatever opportunities come their way.

“For the last month, everybody has struggled to get a sense of what’s possible and what might or might not happen,” Morgan said. “But the news in the last week has been more positive about sport returning than it has been in the previous three weeks.

“There was a stage when the idea of playing any sport over the next four or five months seemed impossible, but so long as the options given are government-approved, it seems a lot more likely that there might be some cricket. I’ve not given up yet!”

With doubts about the feasibility of Australia’s ODI and T20I tour in early July, England’s likeliest chance of international opposition ahead of the T20 World Cup could be to repurpose their three ODIs against Ireland in September, and play T20Is instead.

“We have to make do,” he added. “If Tests were going on, there would be ways and means we could have meaningful practice games in and around those Ireland games in a similar environment.

“We could have proper opposition and maybe use the England Lions there too in order to make it as highly competitive as possible.”

However, given the current uncertainty all around the world, he insisted that all teams would be in the “same boat” going into October’s tournament.

“I think if the T20 World Cup goes ahead in the slot that it’s been allocated at the moment, we will have certainly have played a limited amount of cricket before then,” he said.

“One of the big positives before the outbreak of the virus was that the guys were going to play all of the Pakistan league, all of the IPL, all of the T20 Blast, and get a lot of exposure to T20 cricket in the build-up and hence lots of opportunity for positions.

“But I think given the circumstances, we’ll have to wait and see how much cricket we play and the opportunities that land on guys’ laps. They’ll have to make the most of them because they are very limited ones at the moment.”