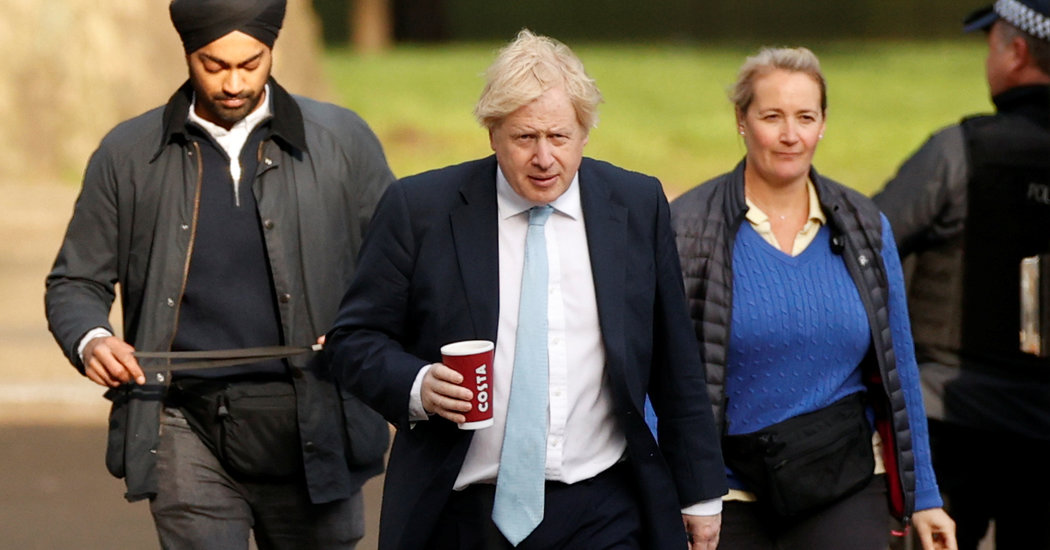 LONDON — When Prime Minister Boris Johnson faced journalists last week for the first time since recovering from the coronavirus, he took his leadoff question from a member of the public, Michelle from Cornwall, who asked him about the dangers of infected tourists coming to her seaside region after the lockdown is lifted.

“Michelle, the short answer is you’re dead right,” Mr. Johnson replied. “We’ve got to get tourism going again, but we can’t allow such a big influx of tourists as to create a second wave of the disease.”

He went on to take questions from reporters at the BBC and national newspapers, though he did not voice the same hearty agreement with those interrogators. The Johnson government’s relations with much of the news media have never been warm, but as the death toll has risen and the government’s handling of the crisis has come under harsher scrutiny, the mood has turned openly contentious.

Britain’s culture minister recently accused the BBC of bias in reporting on the shortage of protective gear in hospitals; the health secretary heatedly claimed that The Times of London misstated policy on shielding older people; and Downing Street posted lengthy rebuttals, by unnamed officials, of newspaper articles that detailed its missteps in dealing with the outbreak.

Even opening up Britain’s daily coronavirus briefing to the public — an innovation Downing Street rolled out two weeks ago to a nonplussed press corps — is viewed by some critics as a sly way to put the journalists on the defensive. With their probing questions, they can easily look meanspirited and petty, especially compared with ordinary people voicing their hopes and anxieties.

“It positions the government and the public against the media, at the very moment that the media is presenting itself as the representative of the people in holding the government to account,” said Meera Selva, director of the Reuters Journalism Fellowship Program at Oxford University.

To some extent, these skirmishes merely continue the hostility between the government and the news media that was deeply embedded before Britain’s general election in December. Downing Street, in trying to control the flow of information and shape the narrative, is using tactics that date back to the 2016 Brexit campaign, when the “Vote Leave” organizers used populist appeals against the news media.

“The populist rhetoric is starting to seep back into the government’s message,” said Sophia Gaston, director of the British Foreign Policy Group and a visiting fellow at the London School of Economics. “In particular,” she added, “the suggestion that there has been a collapse of trust in the media.”

It is not clear that the campaign is working, at least in broad terms. The Reuters Institute for the Study of Journalism found in a recent survey that the public expressed high levels of trust in the BBC and, to a lesser extent, other broadcasters. Newspapers fared less well, but that was the case before the virus struck, too.

What is true, however, is that attitudes toward the press have fractured even more sharply along political lines. In a study to be released on Tuesday, the Reuters Institute found that the public split three ways in its views of whether the press was too critical of the government’s response to the crisis (29 percent), not critical enough (30 percent) or fairly balanced (28 percent).

“We’re beginning to see a polarization that is familiar in the U.S.,” said Rasmus Kleis Nielsen, professor of political communication at Oxford and the director of the Reuters Institute. “This is more evidence that the government is taking the offensive against the media.”

Antagonism between Mr. Johnson and the news media has flared regularly despite the fact that he began his career in journalism, as did his ally and sometime rival Michael Gove, who is now a cabinet minister.

During the election, the left-leaning Daily Mirror was barred from Mr. Johnson’s campaign bus and, after his landslide victory, the new government boycotted two BBC news shows over vague allegations of bias. There were tensions with political reporters, who are collectively known as the Westminster lobby, when Downing Street invited favored journalists to exclusive briefings.

The conflict subsided in the early days of the pandemic, when Queen Elizabeth II rallied the nation to show World War II-like solidarity and Mr. Johnson’s hospitalization with the virus won him sympathy.

But growing questions about the government’s performance brought more negative coverage, including an investigation by London’s Sunday Times that revealed that Mr. Johnson had missed five meetings of an emergency committee dealing with the early stages of the epidemic. BBC’s Panorama program exposed dire shortages of masks, gloves and other gear for health workers.

Downing Street became even more sensitive after the opposition Labour Party elected a leader, Keir Starmer, who has accused the government of being slow to react to the crisis and who has won praise for his forensic questioning.

The tensions have played out on another front, with a secretive scientific panel that advises the government on the virus. Critics put intense pressure on the government to name the members of the panel — known as the Scientific Advisory Group for Emergencies, or SAGE — but it had refused, arguing that keeping them confidential was important for their security and independence.

On Monday, another group of scientists, led by David King, a former chief scientific adviser to the government, staged a splashy protest of SAGE’s lack of transparency. They set up a group called Independent SAGE and convened a meeting on the pandemic, which they streamed on YouTube. Those scientists, not surprisingly, were critical of the government’s handling of the outbreak.

Trying to pre-empt the session, the government released the names of all but two SAGE members while the rival meeting was underway. The two refused to give their permission, it said. There were few surprises on the list, which included officials from the National Health Services, scientific advisers to cabinet ministries and academics from Oxford, Cambridge, and Imperial College.

Defenders of the government complained that several of the scientists on the shadow SAGE were either outspoken critics of Mr. Johnson or supporters of the Labour Party.

The introduction of a “people’s question” at the daily briefing was similarly calculated to cut the news media down to size, according to Ms. Gaston. But she said it was unlikely to help the government much.

Mr. Johnson waffled as much in answering Michelle from Cornwall as he did in answering questions from journalists. Some predicted the government’s effort to connect with the public by discrediting the news media would ultimately backfire.

“This is not a group of people who have any sincere commitment to freedom of expression or to accountability,” said Brian Cathcart, a professor of journalism at Kingston University. “This is a very difficult crisis to handle, but I think they have been caught out in failing to handle it well, and the response is to lash out.”